Ernie Davis was one of college football's greatest and most influential players. Davis helped lead Syracuse University to a national championship in 1959 and in 1961 became the first black player to win the Heisman Trophy, awarded to college football's best player. The "Elmira Express" was then selected first overall by the Cleveland Browns in the National Football League draft the next season, but never played in an NFL game after he was diagnosed with leukemia. He died in 1963 at the age of 23. Davis is remembered as perhaps college football's greatest player and is the inspiration for the 2008 movie The Express.

Ernie Davis was born on December 13, 1939 in New Salem, Pennsylvania, a small mining town of under 700 people about 50 miles south of Pittsburgh. His parents separated and his father was killed in an automobile accident before he was born. Davis was sent at the age of fourteen months to live with his grandparents in industrial Uniontown, Pennsylvania, about fifteen miles from his birthplace. He was raised by his grandparents Willie, a coalminer, and Elizabeth with twelve other siblings until the age of 12 when he moved with his mother and stepfather to Elmira, New York.

Throughout his early life Davis participated in athletics, excelling in baseball, basketball and football. While playing football at Elmira Free Academy, Davis was named Elmira Player of the Year and high school All-American in both his junior and senior years. He was also a superb basketball player, leading Elmira Academy to 52 straight wins and earning the nickname "The Elmira Express." Professional careers in both baseball and basketball were possible for Davis, who ultimately played football, choosing Syracuse University from over 50 other scholarship offers. The 6'2", 215-pound Davis was heavily influenced in his decision to attend Syracuse by eventual NFL Hall of Fame running back Jim Brown, one of the school's first black athletes.

Despite a time at Syracuse marred with racial insensitivity, Davis went on to have one of the most illustrious college football careers in history. Syracuse won the 1959 national championship in his freshman season. He went on to be named First-Team All American in his junior and senior seasons of 1960 and 1961, and in 1961 was the first black athlete to capture the Heisman Trophy, college football's most prestigious award given to the game's best player. He also was honored in that same year as the Sports Magazine Player of the Year and won the Walter Camp Award, an award given to college football's player of the year as voted by Division 1-A football coaches and sports information directors. President John F. Kennedy, who had followed Davis' career, requested to meet him in New York at the awarding of the Heisman Trophy and later sent a telegram which read

Seldom has an athlete been more deserving of such a tribute. Your high standards of performance on the field and off the field, reflect the finest qualities of competition, sportsmanship and citizenship. The nation has bestowed upon you its highest awards for your athletic achievements. It's a privilege for me to address you tonight as an outstanding American, and as a worthy example of our youth. I salute you.

Davis graduated from Syracuse with a degree in economics in 1962 and prepared to enter the NFL Draft. He was taken first overall by the Washington Redskins and immediately traded to Cleveland, who offered him a three-year, $200,000 contract. Davis' friends and family began to notice a change in his demeanor following the draft, testifying that he appeared sluggish and exhausted. He also mentioned that his gums had been bleeding, and was admitted to Evanston Hospital where it was revealed that Davis had acute monocytic leukemia and had less than a year to live.

Browns owner Art Modell chose not to reveal the extent of the illness to Davis until several months after the diagnosis. Having learned of the seriousness of the disease, Davis wrote in a March 1963 article in the Saturday Evening Post that "Some people say that I am unlucky. I don't believe it. And I don't want to sound as if I am particularly brave or unusual. Sometimes I still get down, and sometimes I feel sorry for myself. Nobody is just one thing all the time. But when I look back I can't call myself unlucky. My 23rd birthday was December 14. In these years I have had more than most people get in a lifetime." Two months after the article was published, Davis entered the hospital for the last time and died on May 18, 1963 at the age of 23. Davis was eulogized by both the House and the Senate of the U.S. Congress and over 10,000 people, including the entire Browns organization, attended his funeral in Elmira, where he remains buried.

Davis' inspirational career paved the way for the acceptance of black players in college football as well as in other sports. The Cleveland Browns helped to carry on his legacy by retiring his number 45, although he never suited up as a Brown. Syracuse also retired the number 44, worn by both Davis and Jim Brown, in 2005. Davis was inducted into the College Football Hall of Fame in 1979. He was also the inspiration for the motion picture The Express, released on October 10, 2008.

Ernie Davis was the first African-American to win the Heisman Trophy (Syracuse 1961). 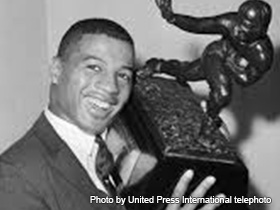