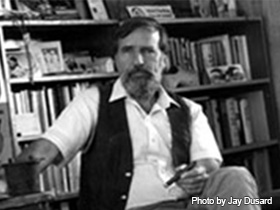 Best known for his environmentalist work Desert Solitaire, Edward Abbey lived in Home, Pennsylvania, after his birth in 1927.

Born in 1927, Edward Abbey became a writer who crusaded for the environment and its preservation. He grew up in Pennsylvania and later focused his life and writing on the American West. Abbey wrote essays, poetry, novels, and nonfiction, and his books include, The Monkey Wrench Gang (1975), Fire on the Mountain (1962), Desert Solitaire (1968), and others. The 1963 Western Heritage Award for his novel Fire on the Mountain was one of multiple awards that recognized his work, and a couple of his works were also adapted to film. Edward Abbey died on March 14, 1989, and is buried in an unmarked location in a US southwestern desert, per his request and his hope that his body would nourish the earth.

Edward Abbey was born on January 29, 1927, in Indiana, Pennsylvania, to Paul Revere Abbey, a farmer, and Mildred Postlewaite Abbey, a teacher. Abbey liked the name of a neighboring town, Home, so much that he claimed he was born there. The struggling Abbey family did move to Home eventually, but Abbey's birth certificate verifies that he was born in Indiana. Though well-known for his writing of canyons and the western United States, Abbey considered his Pennsylvania roots crucial to creating his literary voice.

From 1945 to 1946, Abbey briefly served in the US Army. His post-war educational pursuits were as wide-stretching as the western horizons he so loved. He began his collegiate education at Indiana University of Pennsylvania, but then transferred to the University of New Mexico, where he received a bachelor's degree in philosophy. He spent one year at the University of Edinburgh in Scotland before returning to New Mexico to earn his master's degree in philosophy. He continued studies at Yale, but dropped out after two weeks because of his distaste for the Ivy League structure. Abbey worked as a park ranger and fire lookout with the National Park Service from 1956 to 1971, jobs that ultimately cemented his relationship with the American West.

Molded by years of romanticized ideals about the cowboy lifestyle—by his hitchhiking and trail-riding trip West between his junior and senior years in high school, and by the time spent pursuing his degrees in Albuquerque, New Mexico—Abbey focused his life and his writing on the American West. Abbey described his relationship with the vast and varied beauty of the West as "love at first sight." The Monkey Wrench Gang (1975), Fire on the Mountain (1962), and Desert Solitaire (1968) rate among his greatest contributions to the genre of wilderness literature and recognize the defiling of America's wild lands. He has been described as both America's crankiest citizen and as the godfather of modern environmental activism.

Abbey received many awards. He was a Fulbright Fellow from 1951 to 1952, as well as a Guggenheim Fellow in 1975. His novel Fire on the Mountain won him the Western Heritage Award for Best Novel in 1963. In 1987 he was granted the American Academy of Arts and Letters Award, an honor that he declined due to plans to run a river in Idaho the week of the ceremony. Some of Edward Abbey's works have been adapted to film: The Brave Cowboy was released as Lonely Are the Brave in 1962, and Fire on the Mountain was released in 1981. Throughout his life, Abbey married five times and had five children.

Abbey suffered from a circulatory disorder and died from internal bleeding on March 14, 1989, in Oracle, Arizona. His body was buried in an unmarked location in a southwestern desert of the United States in a sleeping bag, as per his request. Of his burial, Abbey said: "If my decomposing carcass helps nourish the roots of a juniper tree or the wings of a vulture—that is immortality enough for me. And as much as anyone deserves."

The biography Edward Abbey: A Life by James M. Cahalan was published in 2001.