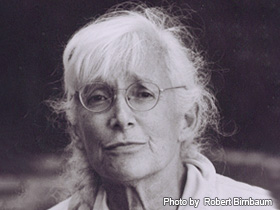 Renata Adler attended Bryn Mawr College and is best known for her work as a journalist and film critic for The New Yorker and The New York Times.

Born in Milan, Italy, in 1938, Renata Adler attended Bryn Mawr College, the University of Paris, and Yale Law School. She is known for her unabashed honesty as a New Yorker and New York Times journalist and film critic, and has also written essay collections, political speeches, and novels, including Politics and Media: Essays (1988) and Pitch Dark (1983).

Renata Adler was born on October 19, 1938, in Milan, Italy. She is the daughter of Frederick L. and Erna Adler. Her family, including her two brothers, moved to America in 1939. They initially settled in New York, but then moved to Danbury, Connecticut. Adler was sent to boarding school at age seven, a memory that she still struggles to understand.

Frederick Adler practiced law before moving to America with his family, and did well with his law studies in America. However, he became frustrated with the profession because of his trouble with speaking English. Frederick Adler's father-in-law recognized this struggle and bought Frederick a wool factory in Danbury. It was through this business that the Adlers accumulated their wealth. In addition to money, Renata Adler inherited her father's intelligence and bravado.

Renata Adler has an extensive academic background. In 1959, she attended Bryn Mawr College in Pennsylvania. In 1961 and 1962, she went to the University of Paris and Harvard University, respectively. At Harvard, Adler met Reuel Wilson, a man whom she planned to marry. However, the two grew apart and they ended their engagement. Eventually, Adler enrolled at Yale Law School.

At the beginning of her professional career, Adler worked for The New Yorker and The New York Times. In 1963, while still engaged to Wilson, she became a journalist for The New Yorker. When asked by The New York Times why she accepted the position, she said, "I started writing so I would have something to say when people at parties asked me what I did." Although the reasons behind her career selection may seem questionable, Adler's fame flourished as a journalist. Her opinionated personality and appreciation of truth sparked the interest of the public.

One of Adler's many controversial articles was published in The New York Review of Books in 1980. Her criticism of Pauline Kael's movie reviews created an impressive public reaction. While deeming another writer's hard work "worthless" raised enough controversy, Adler and Kael were also coworkers at The New Yorker, which created an unbearable environment in the workplace. The New Yorker became dissatisfied with Adler stirring up office politics and eventually made it difficult for her to publish more articles.

In 1967, while Adler was writing for The New Yorker, metropolitan editor Arthur Gelb asked her if she would like to hold the position of chief movie critic for The New York Times. After accepting the offer, Adler never ceased to impress Gelb. "[Her writing] was different, it was new, it was on a very high level," he said. To no surprise, Adler's writing caused more controversy, making The New York Times the focal point of the public eye, and Gelb credited her for "[turning] movie criticism on its ear." Eventually, though, Adler became overwhelmed with the workload and returned to The New Yorker.

Although Renata Adler's pieces for The New Yorker and The New York Times were pivotal, she had many other opportunities to turn heads. John Doar, one of Adler's friends, was majority counsel for the Nixon impeachment inquiry of the US House Judiciary Committee. He was familiar with Adler's strong personality, so he asked her if she would write speeches for Peter Rodino, the chairman of the committee. Adler gladly accepted the invitation. Coincidentally, Adler discovered that another close friend of hers was also a lawyer on the House Judiciary Committee. Burke Marshall was a professor at Yale Law School and a married man 15 years older than Adler. Marshall was an important part of Adler's life and even became a form of emotional support when she adopted her son, Stephen.

In addition to Adler's success in journalism, she became a popular novelist. Pitch Dark, published in 1983, is one of Adler's autobiographical novels. The New York Times describes it as "oblique and modernist." In the novel, Adler created an affair between two people that modeled the relationship she had with Marshall.

In 1986, Renata Adler published one of her most controversial works, Reckless Regard. While writing Reckless Regard, Adler focused on two trials of slander. The first involved Ariel Sharon, the former defense minister of Israel, and Time Magazine. In the other trial, William Westmoreland, the former commander of United States forces in Vietnam, sued CBS. In Reckless Regard, Adler directed her attention toward the plaintiffs, with whom she sympathized. However, her reaction to the cases made her even more unpopular within the journalist spectrum.

One of the most surprising indictments that Renata Adler made in Gone: The Last Days of The New Yorker targeted William Shawn, an editor of the magazine for 35 years. Although Adler addressed Shawn as "an aging king unable to anoint an heir," her insults were seemingly an attempt to mask the love she had for the man. "Whatever faults he may have had or whatever difficulties I may have had, I certainly loved him," Adler admits. "And whatever faults he may have had, the value left the enterprise with him."

Regardless of her love for Shawn or the friendships that she had made at the magazine, Adler allowed her frustration to escape on paper. The anger her words described were rooted in her struggle with betrayal. "When Renata writes, she is brutally honest," said Arthur Gelb. "She's angry now about what happened to The New Yorker. It was her love. She felt it was her family. She feels the original promises were not kept." As usual, many of Adler's critics disapproved of her tone. "The trouble with Renata is she's just unforgiving," one unnamed critic said. "She's a brilliant writer with a tragic flaw, because in almost everything she writes she embeds a time bomb."

Although Renata Adler's books created strong reactions, Canaries in the Mineshaft, a collection of essays published in 2001, proves that she has not been silenced yet. In her essays, Adler expresses her opinions of the press and its lack of reliability. She feels that the media discriminated against the individual voice and, therefore, suffers from a lack of credibility. She once opined:

The value of a free press in our society was always held to lie in competition. By a healthy competition among reporters, from media of every political point of view, the public would have access to reliable information, and a real basis on which to choose. A single monolithic, unitary voice, on the other hand, is anathema to any democratic society. It becomes the voice of every oppressive or totalitarian system of government.

Adler taught at Boston University (BU) for several years. She served as a Visiting Professor of Journalism and a Fellow of the University Professors Program at BU until 2006. That same year, Adler played a role in the resignation of John J. Schultz, the former dean of BU's College of Communication, after she sent emails to Schultz and other professors about the illegitimacy of his resume. Schultz eventually stepped down. Adler continues to express her opinions through the written word and other forms of communication. Her trademark braid and challenging attitude have given her an air of mystery, which keeps the public asking for more. Her voice "trembles with intensity" and never ceases to entertain those who listenÄü?evident in her TV discussion with Charlie Rose about the 2000 elections.

In 2013, her novels Speedboat (1976) and Pitch Dark (1983) were reprinted to fresh accolades, according to James Parker of The Atlantic. Her reputation, in mid-2015, feels floaty and diffractedÄü?quite Internet, really, in that it doesn't completely scan, and it has an undertow.

Her book, After the Tall Timber (2015) is a collection of her greatest nonfiction pieces, amassing over 500 pages. Here is a woman, says VICE writer Catherine Lacey of Renata Adler, who reported the march from Selma to Montgomery at 26 for The New Yorker, who covered Biafra and Vietnam and Black Power demonstrations in Mississippi, who was a speechwriter for the committee chair of Nixon impeachment hearings, who went to Yale Law School at what was arguably the height of her career, who cut her teeth in an era where female reportersÄü?not to mention outspoken, fearless onesÄü?were still relatively rare, and yet so many remember her as the woman who voiced a bracingly honest opinion about a highbrow magazine and another woman's movie reviews.

Take whatever issue you might take with her work, but take it in context.