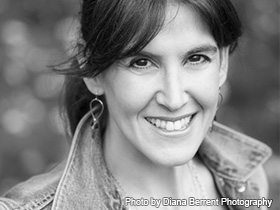 Beth Ain was born in Hershey, Pennsylvania, and later moved to New York City after earning her BA from Brandeis University near Boston. She was a Senior Editor for Scholastic Publishing for six years and by 2008 began writing children's books exclusively, including young adult (YA) historical fiction, novel adaptations of Disney shows and movies, and a series of children's books that began with Starring Jules (as Herself) in 2013.

Beth (Levine) Ain was born in Hershey, Pennsylvania, on July 16, 1975, and later moved to Allentown, Pennsylvania, where she grew up in a suburban neighborhood and cherishes the time spent there riding bikes and exploring the nearby creek with her best friend, who happened to live across the street, according to Ain's website. She describes her junior high and high school self as "a cheerleader, a soccer player, and a math-homework-avoider."

Ain went on to earn her BA in American Studies from Brandeis University in St. Waltham (near Boston), Massachusetts, in 1997. She then moved to New York City, home to many of her close college friends. At the time, her impression of the city was from when she was a little girl with "hot pretzels from a corner stand warm[ing] her up on a cold winter day," her Scholastic biography states. On move-in day, a city bus driver quickly forgave her for knocking the mirror off his bus with her U-Haul, and this cemented her newfound love of the city as her new home. She later met and married Jonathan A. Ain, a corporate lawyer, and together they have two children, seven-year-old Elijah, and nine-year-old Grace.

From April 1998 to July 2002, Ain served as a Senior Editor for Scholastic Publishing. In 2008, she began to work exclusively as a Children's Book Author and Blogger, cultivating her Starring Jules series that began with Starring Jules (as Herself) in 2013. In an interview with Newsday's Beth Whitehouse, Ain describes her transition from writing young adult (YA) historical fiction to writing Starring Jules as taking "a break from 'angsty Y.A. fiction' and mov[ing] into 'angsty 7-year-old fiction.'"

She has also done freelance work as Beth Beechwood writing novelizations of Disney TV shows and films, including "Hannah Montana," "Wizards of Waverly Place," and High School Musical. Starring Jules (Super-Secret Spy Girl) (2014) is the third book within her Starring Jules series, which centers on a precocious second grader. "She's constantly in situations where she has to step out of her comfort zone," Ain tells Whitehouse of the character. "Kids, if you think about it, are always in situations where they have to step out of their comfort zones."

Grace, Ain's nine-year-old, points to the first page of the first Starring Jules book to show Whitehouse how exactly she served as inspiration for the main character. In it, Jules sings a jingle to her brother, and Ain says her daughter did that very thing at age four with her brother, Elijah, "while blowing bubbles in a cup of milk." Meanwhile, Big Henry, Jules' younger brother in the book, sports dinosaur rain boots just like a pair Elijah once had.

In 2010, Ain moved from Manhattan to Port Washington, Long Island, where she continued to live with her family at the time of this writing.

"I have loved books for kids ever since I was one," Beth Ain exclaims on her Tin-Can Stilts Blog. "...staying up long past my bedtime with a flashlight under the covers. I had to get to the end of The Boxcar Children if anyone expected me to get any sleep!"