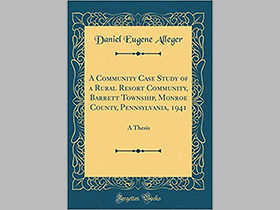 Alleger studied at Penn State Univeristy and penned many bulletins, circulars, and the book Fertile Lands of Friendship (1962).

Economics scholar Daniel E. Alleger was born in Monroe County in 1903. He was educated primarily at Pennsylvania State University, with some coursework completed at Syracuse University. After a number of jobs in the private sector, Alleger became a Professor of Economic Development at the University of Florida, where he remained until retirement. Alleger died in 2001.

Daniel Eugene Alleger was born in East Stroudsburg on October 18, 1902. He was the son of Frank and Lena Alleger. Following high school, Alleger attended Pennsylvania State University (Penn State), earning his BA in 1926. After graduation, he took a position with the United Fruit Company as a researcher on banana production in Honduras and Guatemala. Returning to the United States in 1931, he took a position as an insurance agent with Metropolitan Life in his native Stroudsburg area. In 1933 he met and married M. Carolyn Breckenridge. The couple had one child: Martha. After ten years as an insurance agent, Alleger went back to Penn State to earn his Master of Science degree in 1943. Industry again called, and Alleger worked for Bethlehem Steel for two years. In 1945 he began an association with the University of Florida that would last the rest of his life.

Daniel Alleger was hired as an Associate Professor of Economic Development at the University of Florida in 1945 and retired at that rank in 1973. During his time at the university, Alleger wrote a number of research bulletins for the Florida Agricultural Experiment Station on subjects including rural land ownership, the fate of rural areas as Florida real estate boomed, and the burgeoning population of the elderly in the state. He also wrote a set of four "experiment station circulars" on sharecropping and farm leasing in 1955. He contributed regularly to the scholarly journals in agricultural science, rural sociology, and to volumes about the aging population.

After his retirement in 1973, Alleger remained in Gainesville for several years before moving to Daytona Beach in 1985. Daniel E. Alleger died in Daytona Beach, Florida, on January 25, 2001.