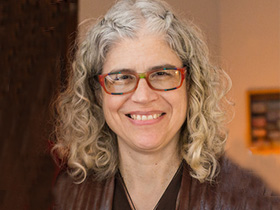 Born in Albuquerque, New Mexico, in 1967, Margaret Almon eventually moved to the United States, where she earned an MFA from University of Oregon in 1992. She has published poems in several literary journals, including Hayden's Poetry Review and The Calyx Anthology Present Tense: Writing and Art by Young Women. She is the recipient of the 1997 National Education Association Grant and winner of the 1997 Sara Henderson Hay Prize for her poem "Crucifixus." Almon was the second Poet Laureate (2000) to be named in Montgomery County, Pennsylvania, and her work has been noted for its grasp on the feminist tradition. At the time of this writing, she also creates mosaics with her husband for their fine glass business, Nutmeg.

Margaret Almon was born on July 29, 1967, in Albuquerque, New Mexico, and shortly thereafter moved to Edmonton in Alberta, Canada, where she lived until she was sixteen. In 1985, she moved to the United States and eventually studied at Hampshire College. She went on to earn her MFA in Creative Writing from the University of Oregon and received an Associated Writing Program Intro Award. Between 1998-2010, Almon worked as a medical librarian in Norristown, Pennsylvania, while writing poetry.

With a particular interest in women's experiences, Almon has written poems that have been published in literary journals such as Hayden's Poetry Review, Seattle Review, Cream City Review, West Branch, The Calyx Anthology Present Tense: Writing and Art by Young Women, Northeast Corridor, American Writing, and Two Rivers Review. She is particularly interested in the ways in which women are threatened or empowered, she said in a Philly.com interview. In her poem Cherry Tree Sonnet, Almon recalls her mother's homemade cherry jam as a metaphor for the unloosing of a grown woman's stifled dream.

Almon has been awarded a Barbara Deming Memorial Grant for feminist writers and a 1997 National Education Association Grant. She was a finalist for the 1997 National Poetry Series, and her poem "Crucifixus," won the 1997 Sara Henderson Hay Prize for Poetry presented by The Pittsburgh Quarterly.

Much of her poetry, including "Crucifixus," takes part in the modern feminist tradition of reworking myths, especially myths associated with Christianity. Almon says this about her motives in writing poetry: "To paraphrase Monique Wittig, I write because women must remember their history, and if it is unrecoverable, they must invent it. Poetry is suited to invention, taking the fragments and imagining the whole. Poetry can find the hidden and the lost. It is an honor to a part of this rediscovery, to use this gift."

In 2002, Almon was selected as the "Best Unpublished Poet in Pennsylvania," and her poem "The Earliest Memory" was published by the Public Poetry Project of the Pennsylvania Center of the Book.

In that same year, she was also named Poet Laureate of Montgomery County, Pennsylvania, in a competition judged by Robert Pinsky, former United States Poet Laureate. Almon was the second Poet Laureate in the county under a program founded in 1998.

At the time of this writing, she lives in Lansdale, Pennsylvania, with her husband, Wayne Stratz, whom she met in 1986, when both were tutoring at Northampton County Community College in Bethlehem; and they make glass mosaics for their joint business, Nutmeg Designs: Fine Glass Craft.

On her website she says, "I began with words and writing poetry, and then in 2005, took those images into the realm of my hands, making mosaics."