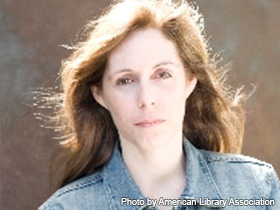 Laurie Halse Anderson, who once worked for the The Philadelphia Inquirer, is an acclaimed author of books for children and young adults, including the New York Times Bestseller Speak.

Laurie Halse Anderson was born on October 23, 1961, in Potsdam, New York. She earned her AA from Onondaga County Community College and BS in Languages and Linguistics from Georgetown University. Soon after, she started a family and a career with The Philadelphia Inquirer and as a freelance reporter with other periodicals. Anderson began publishing her own work in 1996, with her first picture book, Ndito Runs. She went on to publish more picture books, including The Hair of Zoe Fleefenbacher Goes to School (2009), and several works for children and young adult readers, including acclaimed books Speak (1999), Fever 1793 (2000), and Chains (2008). Anderson has been recognized with multiple honors and awards, including a Scott O'Dell Award for Historical Fiction, an ALAN Award, and bestseller lists.

Laurie Halse (rhymes with waltz) Anderson was born Laurie Beth Halse on October 23, 1961, in Potsdam, New York, to Frank and Joyce Halse. She received her AA from Onondaga County Community College in 1981 and went on to earn a BS in Languages and Linguistics from Georgetown University in 1984. After completing her education, Anderson started a family and worked as a reporter for The Philadelphia Inquirer. She was also a freelance reporter for other newspapers and magazines. In 1996, she began publishing her own books with her first picture book for children titled Ndito Runs.

Anderson is well-known for her work Speak (1999), a book she wrote for teenage readers that tells the story of Melinda, a high school freshman. Melinda is an outcast at her school who is sexually assaulted by a senior at a party. The book documents Melinda's reactions to the assault and her feelings of isolation and rejection from those who surround her. Anderson had the idea to write Speak after awaking from a nightmare in which she heard a young girl screaming for help. Speak was adapted to film, starring Kristen Stewart, in 2004. Anderson's other works include Fever 1793 (2000), the story of a teenage girl during a yellow fever breakout, numerous books in the "Wild at Heart" series, the picture book The Hair of Zoe Fleefenbacher Goes to School (2009), and others.

Anderson has received many awards for her publications. Her picture books received various awards and were placed on recommended reading lists. And her two books, Speak and Fever 1793 have been widely recognized. She received honors, such as being a finalist for the National Book Award in Young People's Literature for Speak, and this book won the Edgar Allan Poe Award, the Los Angeles Times Book Prize, and the Printz Honor Medal Book Award. Fever 1793 was an American Library Association Best Book for Young Adults selection and also a Junior Library Guild selection.

Forge, her sequel to the popular Chains (2008) novel, was published in 2010. Chains tells the tale of a young slave girl named Isabel who is sold to a family in New York and ends up spying for the rebels during the Revolutionary War. Forge takes on the voice of Curzon, an on-again-off-again slave that befriended Isabel in the first book, as he takes part in the Continental Army at Valley Forge. Chains was selected as a 2008 National Book Award Finalist and was awarded the 2009 Scott O'Dell Award for Historical Fiction.

According to her website, Anderson received the 2008 ALAN Award from the high school English teachers of America for her "outstanding contributions to the field of adolescent literature." She was also chosen by the American Association of School Librarians (AASL), a division of the American Library Association (ALA), to be their School Library Month spokesperson in April 2010.

At the time of this writing, Laurie Halse Anderson lives in Philadelphia and regularly advocates for diversity in publishing.