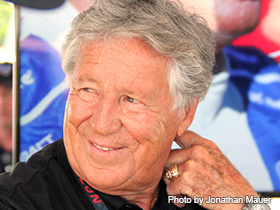 An immigrant to Nazareth, PA, Mario Andretti has written two memoirs of his legendary racing career.

Motorsports Hall of Famer Mario Andretti was born in Montona, Italian Istria in 1940. His family migrated to America in 1955, settling in Nazareth, Pennsylvania. Andretti began racing in the United States Auto Club championship series in 1964 and won the Indy Car championship in 1965, 1966, and 1969. From 1970 to 1974 Andretti raced in the Indy Car, Grand Prix, Formula 5000, and Can-Am circuits. In 1978, Andretti won the Grand Prix championship. He returned to Indy Car in 1981, winning his final championship in 1984. Over his career, Andretti authored books, including What's It Like Out There? (1970) and his autobiography, Andretti (1994).

Mario Andretti was born on February 28, 1940, in Montona, Italian Istria, which is known today as Motovun, Croatia. He was raised along with his twin brother Aldo and his sister Anna Maria by mother Rina (Benvegnu) and father Gigi (Alvise) Andretti. The family migrated around to different communism refugee camps in Tuscany before finally immigrating to the United States in 1955, settling in Nazareth, Pennsylvania. Andretti met his future wife, Dee Ann, at his high school in Nazareth. They went on to have three children: Michael, Jeff, and Barbie.

It was in 1954 in Italy, however, where Andretti received his first inspiration to race while living in a refugee camp. This was where Mario and Aldo observed a section of "Mille Miglia," a famous endurance race that took place all over Italy, and a racer by the name of Alberto Acari. It was an event that would forever change Mario and Aldo's lives. Andretti writes in his autobiography, "the world champion when I was growing up in the early 1950s was Alberto Ascari. He became my idol."

Being young and poor during this time, Andretti did not have the means to obtain a car. He thought he'd caught his big break when he was offered the chance to drive a race car for a local garage. It was shortly after this, before Andretti had a chance to race, that his family moved to America. He and his brother were devastated by the news of this imminent move, as they didn't believe that people raced cars in America. It was no more than a week after arriving in Nazareth, however, that Mario and Aldo discovered a local racetrack. This was the first time Mario had seen an oval track, and he was instantly captivated.

Andretti's family struggled to stay afloat financially during their first few years in America, and so the only option for Mario and Aldo was for them to build their own car. The finished product was not complete until April 25, 1959. They entered it in a local race, and proceeded to win nearly all of the races, with Mario and Aldo alternating as the driver. Soon they were barred from the division and forced to race with faster cars.

During the last race of this first season, tragedy struck. Aldo wrecked violently and lost consciousness, which developed into a coma later that evening. Aldo was in a coma for two weeks, and although he made a full recovery, he was never the same on the racetrack. Mario's passion for driving never wavered because of this incident. In fact, Mario was building a new racecar soon after Aldo was released from the hospital.

The next step for Andretti was the jump from local dirt track racing to sprint cars, where the money, recognition, and speed were all at heightened levels. Andretti struggled at the beginning of his sprint career, and failed to win a race throughout the course of his first season. Over this span of 20 races, Andretti didn't even finish the race in more than half of them. After this abysmal first year, Andretti decided to give up on sprint cars for a while.

In 1962, Andretti began trying his luck with midget car racing. On January 6, 1962, Andretti had his first midget car race. Three days after his 22nd birthday, on March 3, 1962, Mario won his first meaningful race at Teaneck, New Jersey. On that day, Andretti actually won three separate races, and he was beginning to make his mark in the sport. In Andretti's words from What's It Like Out There, "Once you are over the hump, once you put a victory in your pocket, tension just drops away." He went on to win three more times that year and finished in the top ten in 24 of the 33 races. But midget car racing was still considered "minor league," and Andretti yearned for more.

On September 21, 1963, Andretti stepped back into the world of sprint car racing, joining the United States Auto Club (USAC), who authorized America's national racing championships of Indy cars, sprint cars, and others at the time. Andretti raced well enough in that first season to earn him third place in the overall sprint standings. Still, though, Andretti would not be content until he was racing with the "big boys" in Indy car, the premier USAC division.

The next year, on April 19, 1964, Andretti raced in his first Indy Car championship series race in Trenton, New Jersey. Andretti did not fare well, starting 16th and finishing 11th, eight laps behind the leader. These struggles continued as Andretti failed to finish any higher than 8th throughout his entire first year of Indy car racing (besides a third place finish where he still finished four laps behind the leader). He was, however, only 24 and had gained valuable experience.

In the first race of the 1965 Indy Car championship series, Andretti really began to shine. He led the race for 60 of the 150 laps, and ended up placing 6th. In four of the next five races he finished in the top five, including a third place finish at the Indianapolis Speedway where he was named Rookie of the Year and his first Indy Car win at Indianapolis Raceway Park on July 25, 1965. Andretti went on to win the entire Indy Car championship that year.

One result of Andretti's newfound success was an offer from the Indianapolis Star to have Andretti write a racing column in their newspaper. In his column, Andretti would give his perspective about racing, his fellow drivers, equipment, and cars. He later continued his writing career by authoring his first book, What's it Like Out There? in 1970.

Andretti continued having success over the next few years in the Indy Car championship series. He went on to win the series again in 1966 and in 1969. Over the six-year span from 1964 to 1969, Andretti started 111 races in the Indy Car championship series. He finished in the top three an astounding 62 times, winning 30 of these races, and finished in the top two in the final championship standings in every year but 1964. He was also awarded "Driver of the Year" honors by the USAC for his outstanding year in 1967. In this year alone, Andretti won the Daytona 500, one of the most prestigious stock car tracks, won the "12 Hours of Sebring," the premier endurance race at the time, and finished 2nd in the Indianapolis 500.

From 1970 to 1974 Andretti raced in Indy Car, Grand Prix, Formula 5000, and Can-Am races. These were all recognized and prominent circuits, but points gained for winning or placing in one do not count for the others. Thus, as Andretti was forced to miss a number of races from each circuit for attending others, he did not collect any championships during this time. He did attain some level of success in Formula 5000, winning seven races from 1974 to 1975, and finishing second in the overall points standings in both seasons in both of these years.

From 1975 until 1982 Andretti decided to stop juggling so many different racing circuits and focus his talents on one—the Grand Prix circuit, also known as Formula One. This was a circuit that had gained prominence in Europe in the early 1900s, and is still considered one of the most competitive circuits to this day. During this time period, Andretti won 12 races along with the world championship of the 1978 season, becoming only the second American to capture this title. He bade farewell to Grand Prix racing in 1982, capturing the pole position and finishing third in the final race of the season.

After 1981 Andretti returned to the Indy Car circuit, where he raced until 1994, capturing the overall championship in 1984, his fourth Indy Car championship. In 1991, Andretti again won the Indy Car championship, although this time it was his son, Michael, with Mario finishing 7th overall. The year 1991 marked the first year with four family members racing in the same circuit, with Mario's other son, Jeff, and Mario's nephew, John, joining Michael and Mario. Andretti captured his final Indy Car win in 1993 in Phoenix.

Andretti would go on to race in different circuits for a few more years, retiring from racing in 2000, although he is forever bound to the sport. In Andretti's autobiography, when asked how he wants to be remembered, he states, "just as a guy that gave 110 percent, a man that really enjoyed his work. I love motor racing. It's been my life, and I've given it all I could."

Mario Andretti also established himself as a force in the business world. He is the founder of the Andretti Winery in Napa Valley, California, and of the Andretti Racing School in Las Vegas, Nevada. His accomplishments opened doors for his son Michael, among others, and this led to success on the racetrack along with the establishment of the Michael Andretti Foundation, a foundation that aids in the education, health, and welfare of America's children and citizens. As the family business of racing continues, some of the Andretti family, including Marco, continue reside in Nazareth, Pennsylvania, according to Jerry Perez of The Drive.