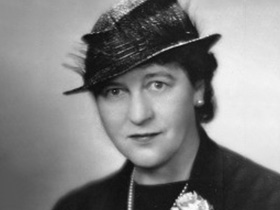 Novelist Margaret Ayer Barnes studied literature and philosophy at Bryn Mawr College and won the Pulitzer Prize for her novel Years of Grace (1930).

Born in Chicago, Illinois, in 1886, Margaret Ayer Barnes studied literature and philosophy at Bryn Mawr College in Pennsylvania, where later she became the vice president of the Alumnae Association. She married Cecil Barnes and had three sons. After enduring a terrible car accident while vacationing in France, Margaret started writing, encouraged by her childhood friend, Edward Sheldon. Barnes is remembered as a writer of novels, short stories, and plays. She is well-known for her Pulitzer Prize winning novel Years of Grace, published in 1930. Margaret Ayer Barnes died in 1967 in Cambridge, Massachusetts.

Margaret Ayer Barnes was born Margaret Ayer in Chicago, Illinois, on April 8, 1886. She was the youngest of the five children and was highly competitive, witty, and intellectual. Young Margaret Barnes thrived on vigorous debates with her two older brothers and sisters. In addition, both of her parents took a keen interest in civil affairs. The family vacationed often in the summer at Lake Geneva, Wisconsin. Here she met Edward Sheldon, a future playwright and member of a wealthy Chicago family. They both shared the passion for theater and reading and discussing literary merits of plays. In later years, Sheldon went to New York to begin his playwriting career. But their close relationship did not end; it resumed later on as Barnes's launched her literary career.

Barnes started her higher education in 1904 at the Pennsylvania campus of Bryn Mawr College where she became an outstanding member of her class. In college, her interests centered on literature and philosophy and she graduated in 1907 with her Bachelor of Arts in English and Philosophy. The most enduring aspect of her college education sprang from the clarion challenge of Carey Thomas who inspired her to write on modern feminism.

A few years later, Margaret Ayer Barnes married Cecil Barnes, a lawyer from Chicago, on May 21, 1910. Two years, later she gave birth to her first son Cecil Barnes, Jr. Later two more, Edward and Benjamin, followed. In her life as a mother and wife, Barnes never allowed her domestic responsibilities to occupy her completely. As her three sons grew up and went off to boarding school and later to Harvard, the range of her activities broadened. She found great delight in swimming, hiking, and being outdoors, and especially being involved in the theater.

Barnes served as the vice president of the Bryn Mawr Alumnae Association and later was elected in 1920 to a three-year term as alumni director of the college. This position presented her with numerous speaking opportunities which gave her the opportunity to distinguish herself from others. More and more people called on her as a speaker and she soon took the role to speak for higher education for women in modern society.

Five years later, Barnes' life changed dramatically. In 1925, while vacationing in France, her limousine collided head on with another car. In the accident, Barnes fractured her skull, her back, and three ribs. At first, she was expected to be bedridden for the rest of her life from the multiple injuries she suffered, but she fought and eventually resumed normal physical activities after a few month of experiencing excruciating pain and a slow recovery.

Because of her limited mobility, Barnes started to write. For pleasure she wrote short stories. Her painful recovery was later brightened by a renewed friendship with Edward Sheldon. Sheldon, now totally disabled by arthritis and soon to lose his eyesight, made her his special concern. He was her inspiration and encouragement to start and continue writing. Consequently, Barnes began to submit stories for publication and her first short stories were accepted by the Pictorial Review a year later. Shortly after, Barnes realized her passion for theater and how her experience would be an asset to playwriting, so she began to write plays. Sheldon and Barnes worked together to dramatize Edith Wharton's novel Age of Innocence (1920); the play was produced in 1928 and was an instant success.

A year later, Barnes and Sheldon worked on a comedy titled Jenny and, in 1930, the melodrama Dishonored Lady, based on the 1857 trial of a British woman for the murder of her lover. Barnes' plays Age of Innocence and Jenny ran for more than a hundred performances on Broadway, but Dishonored Lady was never staged.

Not only did Barnes have success with short stories and screenplays, she was also a great novelist. In 1928, she published Prevailing Winds, a collection of eight short stories that had originally appeared in the popular magazines Pictorial Review, Harper's, and Red Book. Then came Barnes's most successful and well-known novel in 1930, Years of Grace, which won the Pulitzer Prize in 1931.

This novel is centered on the social manners of upper middle class society beginning in the 1890s and continuing into the 1930s, chronicling the life of Jane from her teens to age 54. In this novel as in others, her female protagonists are often traditionalists, struggling to uphold conventional morality in the face of changing social climates. According to William Stuckey from his assessment of the total literary achievement of Mrs. Barnes, the publication and fame of Years of Grace attracted many reviewers and readers.

Lloyd C. Taylor, author of Barnes' biography, pointed out that Barnes used a unique way to write her novels. She used a fictional approach for a social history of the upper middle class in America during the Spanish-American war through the Great Depression. Barnes depicted people and places with a minute accuracy, but expounded a definite conservative belief. William J. Stuckey also said that Years of Grace is another tract on economics. It invites the reader to admire the cozy advantages of having led a dull, safe life and arriving at old age with a comfortable bank account and well-finished house. Furthermore, Stuckey argued that it is hard to view Barnes as a person who pleads for conservatism when she writes on themes of feminism in all of her fiction.

Barnes published four additional novels, Westward Passage (1931), Within This Present (1933), Edna His Wife (1935), and Wisdom's Gate (1938). Overall, her critics have said that her novels offer a priceless source of the American social history, depicted in fiction that recreates social scenes of late nineteenth century and early twentieth century America.

Margaret Ayer Barnes was a creative and a productive writer into her forties, and after the publication of Wisdom's Gate, which shows evidence of the skills that would bring her critical acclaim, her writing slowed and ceased. In Prevailing Winds, Barnes used her theatrical knowledge to describe characters through conversations but her observations of characters were always limited to the upper-middle-class of Chicago in the early 20th century.

Barnes lived the remainder of her life in Cambridge, Massachusetts, where she died on October 26, 1967. She once said that "the story of a life may be poignantly told in five thousand words, if the proper facts are emphasized and suppressed."