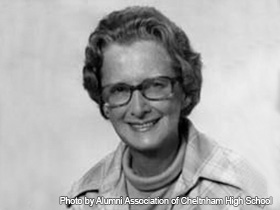 Barbara S. Bates was born in Philadelphia, Pennsylvania, on April 28, 1919. She has worked as an editor and instructor for creative writing courses, as well as written a number of children's books over the last 50 years. She passed away at age 83 in Jenkintown, Pennsylvania.

Barbara Snedeker Bates was born to R. Cuyler and Dorothy Roberts Snedeker on April 28, 1919, in Philadelphia, Pennsylvania. She graduated from Cheltenham High School in Wyncote, Pennsylvania, in 1936, and went on to attend Wellesley College in where she earned her Bachelor of Arts in religion in 1940.

After graduating, she went to work at the Westminster Press in Philadelphia as the story papers editor. After a few years, she became the fiction editor and eventually the children's book editor. During that time, she married Frederick Bates on January 20, 1945, with whom she would later have two children—Susan Penelope and Stephen Cuyler. In 1957, she also started working as an adult education teacher of creative writing in Abington, Cheltenham, and Willow Grove, Pennsylvania. Bates also led writers conferences, such as the International Writers Seminar, which occurred in Green Lake, Wisconsin, in 1962.

When she was not editing or teaching, Bates was a children's book author. She was a rather prolific writer, having eight books published over a 16 year period. Her book, The Real Book of Pets (1952), is not your typical children's picture book. Instead of putting a few words per page and large images, Bates writes a great book, aimed at children, on how to take care of and love some household pets. Divided into chapters by type of animal, she details how to care for, feed, and play with your dog, horse, cat, bird, etc. Accompanying her chapters, there are beautifully illustrated pictures of children playing with such pets, sketched by Mary Snedeker. Bates even goes so far as to discuss pets from other places like monkeys: "Monkeys are often sold in pet shops and many people keep them for years. Because they are quite intelligent they are intriguing as pets, ridiculously like a person in their habits." For children who may want to pursue a career caring for animals, she even includes a list of different animal-related professions and explains what they do. It is an extremely comprehensive book and a great learning tool for young children who love animals.

In addition to writing children's books, Bates also wrote literary articles about books and bibliophilia. One article in particular, "Identifying High Interest/Low Reading Level Books," was featured in the School Library Journal in 1977. In this article, Bates diligently explains three types of books for children learning to read, focusing most on the third category—High Interest/Low Reading Level books — which focus on older children who are just learning to read. She explains it is difficult to motivate these students because there are not enough books written specifically for them, with pertinent subject matter and still a certain level of comprehensibility. Her love of books extended beyond writing to the children and their own passion for reading as well.

After a rather prolific period of writing, Barbara S. Bates retired. Her husband died in 1990 and in 2002, after writing more than 250 books, Bates passed away on November 3 from pancreatic cancer in Jenkintown, Pennsylvania. She is survived by her children, two sisters, and two grandchildren as well as her unforgettable stories.