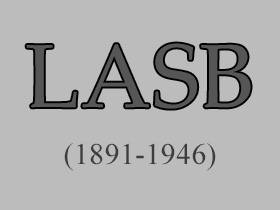 Born in Sumter, South Carolina, on September 29, 1891, Louis Bellinger became the only African American architect in Pittsburgh and one of only sixty in the nation when he produced his major architectural contributions in the 1930s. Bellinger began his career as a professor of mathematics before moving to Pittsburgh to practice architecture. His two major contributions to the Pittsburgh landscape were Greenlee Field, home of the professional Negro League baseball team, the Pittsburgh Crawfords, and the Pythian Temple, used by the Hill District’s chapter of the Knights of Pythias. Bellinger’s architectural career spanned nearly three decades. He died unexpectedly on February 6, 1946.

Louis Arnett Stuart Bellinger, a famous African American architect, was born on September 29, 1891, in Sumter, South Carolina, and spent his youth in Charleston. He then moved to Washington, D.C. to attend Howard University, a historically black college (HBCU), where he received a Bachelor of Science in mathematics and engineering. Bellinger was a well-rounded student and studied languages such as Latin, Greek, and German during his time at Howard. He graduated in 1914 and married Ethel C. Connel. The couple then moved to Martin, Florida, where Bellinger briefly taught mathematics at Fessenden Academy. From 1915 to 1916, he taught mathematics at Allen University, an HBCU in Columbia, South Carolina. When World War I broke out, he enlisted in the United States Army. Bellinger served as a Lieutenant from June to August 1917, then continued teaching after the war.

In 1919, Bellinger moved to Pittsburgh, Pennsylvania, where his architectural abilities became widely known. He was the only African American architect in western Pennsylvania at the start of his career and one of only sixty in the nation. He started his work in Pittsburgh as a private practice architect; he built a private home in Greenfield and an apartment building. Even though he was first on the eligibility list, he waited eleven months before he was appointed to a design position in Pittsburgh’s city architect’s office. According to the Pittsburgh Courier, Bellinger’s appointment in 1923 was “timely,” and “due to the loyal support given to him by race members, both men and women” ("Local Man Appointed to City Architect’s Office”).

From 1923 to 1932, Bellinger contributed to several architectural projects in Pittsburgh while working for the city architect’s office. These included park service buildings and a police station. His work for the city is not well-documented, but the position allowed him to gain useful experience and make connections throughout the city. During this time, Bellinger enrolled in architecture classes at the Carnegie Institute of Technology, now known as Carnegie Mellon University. Bellinger also left his architectural mark on Philadelphia, where, in 1926, he was commissioned to design a now demolished African Methodist Episcopal Church.

Bellinger made many architectural contributions to the Pittsburgh landscape. His two major projects were in Pittsburgh’s Hill District, which, at the time, was demographically an African American neighborhood. His first contribution was the local Knights of Pythias’s Grand Lodge, also known as the Pythian Temple. It was situated on Centre Avenue and was intended to be used by the local chapter members and as a commercial and community recreation space. Bellinger’s architectural plans were approved by the Knights of Pythias’s Grand Chancellor in March 1927 and the Temple opened its doors just eight months later. The structure was eventually sold to Harry Hendel in 1937 and became the New Granada Theater, a popular community destination until it was forced to close in the 1960s. Bellinger’s original structure remains standing. As of this writing, it is slated to become a multi-use community space.

Bellinger’s second major design project was Greenlee Park in the Hill District, which was home to the Pittsburgh Crawfords, a team within baseball’s Negro League. Situated on Bedford Avenue, the park opened in 1932 with a capacity of approximately 6,000-7,500 and a promise by the Pittsburgh Courier that it would become “the mecca of the Hill” (“Greenlee Ball Park Preps for Opener”). By 1938, just a mere seven years after its opening, the Pittsburgh Housing Authority demolished Greenlee Park and used the land to build public housing for the neighborhood. In 1932, Bellinger also ran for Congress in Pennsylvania’s 32nd District. He was the only Black man on the ballot. Despite polling over 6,000 votes in the primary election, Bellinger lost his Congressional run.

By 1937 Bellinger had left behind his architectural private practice and had been hired by the City of Pittsburgh as a building inspector. Not long after, he began seeking private commissions again and worked on several smaller projects, including a basement in Hazelwood and other houses and local businesses in Pittsburgh neighborhoods.

Bellinger died unexpectedly on February 6, 1946, of a cerebral brain hemorrhage and was buried in Pittsburgh at Allegheny Cemetery.