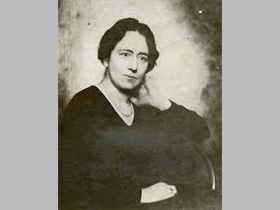 The sister of Stephen Vincent and William Rose Benèt, Laura was a poet, novelist, and a noted biographer, although she did not achieve the literary success that her brothers did.

Laura Benèt, born June 13, 1884, was an award-winning poet after receiving an award from the National Poetry Center in 1936. In 1958, she had her poems recorded at the Library of Congress. She also received recognition from the National Society of Arts and Letters. She studied at Moravian College in Bethlehem, Pennsylvania. She died on February 17, 1979.

Laura Benèt was a social worker, newspaper editor, poet, novelist and biographer. She was born June 13, 1884, at Fort Hamilton, Brooklyn, New York. She was the daughter of James Walker, an army officer, and Frances Neill Benèt (maiden name, Rose). She was the elder sister to two very important literary figures: Saturday Review editor William Rose Benèt (18 months younger) and Pulitzer Prize-winner Stephen Vincent (12 years younger). Benèt graduated from the Emma Willard School in Troy, New York. She received a bachelor's degree at Vassar College in 1907, and she received a litt.D degree from Moravian College in Bethlehem, Pennsylvania, in 1967.

During her time as a writer, she wrote children's books, novels, poetry, and biographies. "Benèt's six slim books of poetry are only a small part of her output, but she considered herself a poet first," according to Carol Gartner. The poems in Is Morning Sure? "are more solid, yet still characteristically delicate," explains Gartner. The following poem is from Is Morning Sure?.

Slim Foot I know a meadow Where light is dim. Poppy flowers Burn at its rim, Doves cry drowsily, Streams lie still, Brown head to gold head Nods at will.

To reach that meadow, O child of grace, Let lacy spider web Cover your face. Lay your hand on the root By the rose-thorn hedge- And-your-slim-foot- Goes-over-its-edge!

The following poem is from In Love with Time, the book of poetry that Benèt considered to be her best volume:

In Love with Time I saw Time in a dream and he was young, Young as the proudest stripling of eighteen. He moved like summer wind and round him clung Days, minutes, hours wreathed in fresh-cut green, His Burnished hair a mane of flying gold. I saw Time in a dream; he was not old.

Benèt belonged to the Poetry Society of America, PEN, Women Poets, Craftsman Group, and the Pen and Brush Club (honorary). In 1936, she received a medal as an honor poet from the National Poetry Center. Her poems were recorded at the Library of Congress in 1958. Laura Benèt lived in New York City and died on February 17, 1979. She was buried in Section 6 of the Arlington National Cemetery with her parents.