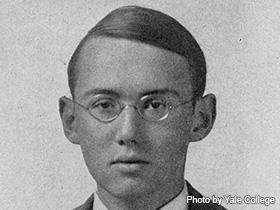 Poet, novelist, and writer of short stories inspired by American historical events, Benèt won the Pulitzer Prize for poetry in 1929 for his epic poem, John Brown's Body (1928), and posthumously in 1944 for Western Star (1943).

Pulitzer Prize-winning poet Stephen Vincent Benèt was born in Bethlehem in 1898. After a well-traveled youth, Benèt began a prolific writing career. Though he wrote many short stories for sale to magazines, he felt they distracted him from his main project, the long poem. He was able to complete John Brown's Body (1928), a book length "cyclorama" about the American Civil War. During the early years of World War II, Benèt did a lot of writing for the government in broadcasts and patriotic articles. He completed the first volume of a planned five book chronicle of American history, Western Star, at the time of his death in March 1943.

Stephen Benèt was born in Bethlehem, Pennsylvania, on July 22, 1898. He was the son of James Benèt, a career officer in the U.S. Army, and Frances Benèt. He had one brother, William Rose Benèt and a sister, Laura Benèt. During his childhood, Benèt's family moved often due to his father's involvement in the military. At the age of three, Benèt contracted scarlet fever, which impaired his eyesight and general health for the rest of his life. In 1922, Benèt married Rosemary Carr. They had one son and two daughters.

Benèt's early education began at home through a system of correspondence. His father loved to read, recite, and discuss poetry with his family. At the suggestion of a doctor, in response to Benèt's poor health, Benèt was sent to the Hitchcock Military Academy in Jacinto, California, at the age of twelve. A year later he moved with his family to Georgia, where he attended Summerville Academy. During this time he wrote an abundance of poetry. When Benèt was thirteen, a poem of his won a prize from the St. Nicholas League. A year later, a ballad he wrote won another prize and was published in St. Nicholas Magazine. In 1915, he sold his first poem to the New Republic. Later that year he wrote his first book of poetry, Five Men and Pompey (1915). At the age of seventeen, Benèt entered Yale University. He wrote and became editor of both the student literary magazine and the student humor magazine. He also won several literary prizes while attending Yale, and in 1919, Benèt received his BA. He returned to Yale three months later for graduate work and received his MA in 1920. During the summer of 1920, Benèt made his first trip to Paris, where he attended the Sorbonne. In Paris, he met Rosemary Carr. The two were married when they returned to the United States in 1921. In the following years, Benèt published several novels, short stories, and poems.

Benèt's writing dealt mainly with American life and history. His most famous work, John Brown's Body (1928), was a long poem about experiences in the Civil War and how it affected various Americans. The poem was an immediate success. It won the Pulitzer Prize in 1929. That same year, Benèt was also elected to the National Institute of Arts and Letters. "The Devil and Daniel Webster" and "Johnny Pye and the Fool-Killer," both published in 1937, became Benèt's most famous short stories. "The Devil and Daniel Webster," which, according to Garrison Keillor's Writer's Almanac, originally appeared in The Saturday Evening Post "is a tall tale about a New Hampshire farmer who sells his soul to the Devil and then hires orator Daniel Webster to argue his case in front of a midnight jury of American villains." In 1938, he was elected to the American Academy of Arts and Letters. He became editor of the Yale Series of Younger Poets in 1933, a position he held until the time of his death. After being awarded a Guggenheim Fellowship to support him while researching it, Benèt won a second Pulitzer Prize for his book Western Star (1943) in 1944, a year after his death.

In 1930, Benèt suffered arthritis of the spine. This, in addition to health problems caused by his early ailment of scarlet fever, led to Benèt's declining health during the 1930s and 1940s. He died of a heart attack in 1943 at his home in New York City. The Almanac quotes his written words: "Life is not lost by dying; life is lost minute by minute, day by dragging day, in all the thousand small uncaring ways."