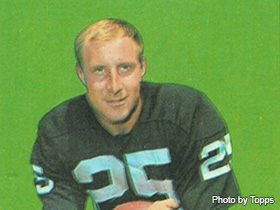 Fred Biletnikoff was born in Erie, Pennsylvania on February 23, 1943. He attended Florida State where he played football and was an All-American. Biletnikoff was drafted second in the NFL draft by the Oakland Raiders, where he played all 15 years of his career. He was named the Super Bowl XI MVP. After retiring from football, he was given a huge honor by having a college football trophy named after him, The Biletnikoff Award, in 1994, and coached for the Raiders until 2007 when he retired from football all together.

Fred Biletnikoff was born on February 23, 1943, in Erie, Pennsylvania. During high school, he played wide receiver for Erie Tech Memorial. After a very successful career in high school, Biletnikoff was offered a scholarship by Bill Peterson, the head coach of the Florida State Seminoles, to play football for him. In his junior year at Florida State, the coach changed their offensive play calling to a more open passing system. This allowed Biletnikoff to showcase his talents as a pass catcher. Because of this change in play calling, Biletnikoff was fourth in the nation with 57 receptions and 11 touchdowns in his senior season. The statistics that he achieved in his senior season are remarkable, because during the 1960s passing was not highly regarded in college football. To catch 57 passes in ten games was very impressive. The most impressive part about the statistics is that he averaged a touchdown reception every five times he caught a pass. These statistics in his senior year helped Biletnikoff vault himself into the national spotlight as a wide receiver who gained All-American status. Because of his accolades in college football, Biletnikoff would eventually have a trophy named after him. After becoming an All-American, he showcased his talents one more time before the NFL draft in the Gator Bowl against Oklahoma by catching four touchdown passes to help lead the Seminoles to a victory.

In the 1965 NFL draft, Biletnikoff was drafted second overall by the Oakland Raiders. In his first year in the league, he did not get to start in a game until the seventh game of the season. Biletnikoff saw minor playing time in his first year and put up moderate numbers. In his second year, he tore his knee in the ninth game of the season and had to have reconstructive surgery on it in the off-season. Finally, in his third season in the league, Biletnikoff finally broke the starting line-up for good and remained there for the rest of his career. Biletnikoff spent 14 years in the Raiders line-up until 1978 when he retired from professional football. Biletnikoff played in two Super Bowls (II and XI), and was named MVP of Super Bowl XI. During his career he amassed 589 receptions, which was fourth most all-time at that time, and turned those catches into 8974 yards and 76 touchdowns (which is still the Raiders all-time touchdown record). While playing for the Raiders, Biletnikoff also earned Pro-Bowl honors four times, All-AFC honors four times, and was an AFL all-star twice.

After his career in the NFL, Biletnikoff played one year in the Canadian Football League (CFL) with the Montreal Alouettes in 1980. Once he finished his one year stint in the CFL, Biletnikoff turned to the only other thing that he could think of doing: coaching. In 1982, he helped to coach Orange Glen High School, and then in 1983 he coached at Palomar Junior College. In 1984, Biletnikoff coached Diablo Valley Junior College. Over the next three years, he continued to coach for the Oakland Invaders, Arizona Wranglers, and Calgary Stampeders.

Then in 1988, Biletnikoff was inducted into the NFL Hall of Fame. This is the greatest achievement for any professional football player. In 1991, he was inducted into the College Football Hall of Fame, and in 1994 he had a trophy named after him. The Biletnikoff Trophy is awarded annually to college football's best receiver. The Biletnikoff award was created by the Tallahassee Quarterback Club, an independent, charitable foundation. This is an honor that shows that Biletnikoff's impact in college and professional football was very high. Over the last 18 years, Biletnikoff has assisted the Oakland Raiders from various positions like receivers coach, and quality control assistant.