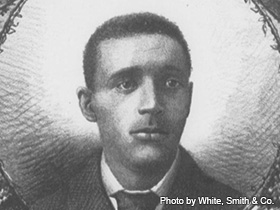 Jimmy Bland, born in Flushing, New York, on October 22, 1854, is best known for his song "Carry Me Back to Old Virginny," which was the state song of Virginia for 57 years. After graduating from Howard University, Bland pursued his dream of performing. He spent the majority of his life performing in minstrel shows, finding his greatest success as a solo act in London. Bland died in 1911 in Philadelphia, Pennsylvania, of tuberculosis.

James (Jimmy) Alan Bland was born on October 22, 1854, in Flushing, Long Island, New York, to Allen M. Bland and Lidia Ann (Cromwell) Bland, as one of 12 children. Allen Bland was one of the first black men to receive a college education; he also attended law school at Howard University and was the first black man to be appointed examiner in the United States Patent Office.

Bland spent his early life in Philadelphia, Pennsylvania, where he was first introduced to music by listening to people play on the streets. He learned how to play his first banjo when he was 12. He finished high school in Washington, DC, and went on to a pre-law program at Howard University. After deciding that law wasn't for him and that his true calling was performance, he ended up graduating with a Liberal Arts degree in 1873 at age 19.

Bland's musical talent was entirely self-taught. While he was living in Washington, he worked as a page in the U.S. House of Representatives, performed for members of the Manhattan Club, and also performed at the homes of several Washington notables.

After graduating from college, Bland sought a career in the minstrel business. He worked with several different groups, playing guitar, dancing, singing, and composing songs for the shows. In 1875, he got his first job as a leading performer with the Original Black Diamonds of Boston. In 1876, he joined the Bohee Minstrels, and in 1881 he traveled to London with Haverly's Genuine Colored Minstrels. It was in Britain that Bland found his greatest success, even opening at Her Majesty's Theatre in London.

Bland's most well-known song is "Carry Me Back to Old Virginny." He composed it while visiting a friend, Mannie Friend, in Tidewater, Virginia. It became the official state song of Virginia in 1940. Ever since then, legislation has been introduced in an attempt to change the wording, but they have all failed. Some politicians feel that the lyrics romanticize slavery, lyrics such as "There's where this old darkey's life will pass away./ Massa and Missis have long gone before me." Legislation was passed in 1997 that retired "Carry Me Back to Old Virginny" as the state song, but it still remains the state song emeritus.

After Bland moved back to the United States in 1901, he drifted into relative obscurity. The popularity of minstrel shows was declining, and so was the demand for minstrel performers. The last few years of Bland's life were spent in poverty, despite having been very successful during his prime. He died in Philadelphia on May 5, 1911, of tuberculosis. He was buried in an unmarked grave in Merion Cemetery in Bala Cynwyd. In 1939, with the help of Bland's relatives, the American Society of Composers, Authors, and Publishers (ASCAP) found his grave and erected a monument on the site. The number of total songs composed by Bland during his life is estimated at between six and seven hundred.

In the first published biography of Bland in Etude, Kelly Miller writes of the artist: "He holds up a mirror to nature. James A. Bland constitutes a unique character in lyric literature, in that, though being a scion of an enslaved race, he immortalizes the soul yearnings of his people to glorify the land where his ancestors were held in bondage."