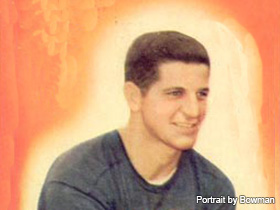 Hall of Fame quarterback and kicker George Blanda played 26 years in the NFL.

Born on September 17, 1927 in Youngwood, Pennsylvania, George Blanda played football at the University of Kentucky and then went on to play professionally. Playing mainly quarterback and kicker, he played for the Chicago Bears, Houston Oilers, and Oakland Raiders over his 26 year professional career. During his career, he became a very well-respected player and set numerous passing, kicking, and scoring records. Blanda retired from professional football at 48, and shortly after wrote an autobiography. He was inducted into the Pro Football Hall of Fame in 1981. Blanda now resides with his wife and has two grown children.

Legendary football player George Frederick Blanda was born on September 17, 1927, in Youngwood, Pennsylvania, just outside of Pittsburgh. Not much is known about his childhood; however, it is known that his father was a coal miner. Blanda attended college at the University of Kentucky from 1945-1948, where he played both quarterback and kicker on the football team. The team had a 1-9 record during Blanda's freshman year, but then the team's record improved greatly for the rest of the time Blanda was in school.

Blanda became the starting quarterback for the team during his junior and senior seasons. While he was a solid starter for a winning team, his statistics were mediocre and he did not feel that he had performed well enough to continue playing football at the professional level. However, to his surprise, he was drafted by the Chicago Bears in the twelfth round of the 1949 National Football League (NFL) Draft.

After drafting Blanda, Bears owner and coach George Halas signed him to a contract of $6,000 per year along with a $600 signing bonus. Blanda started his career as the kicker and backup quarterback for the Bears. He also sometimes came into games on defense, playing a little bit at both linebacker and safety. The reason for this was that he was very motivated and just wanted to be on the field for as much time as possible.

Early in his career with the Bears, Blanda and Halas were involved in an ongoing dispute regarding Blanda's contract. After being on the team for four years without receiving a raise, Blanda threatened to leave the team and join the Canadian Football League. Halas finally got Blanda to stay by increasing his salary to $11,600. The following season, Blanda finally earned the job of starting quarterback. While the team finished with a losing record in 1953, all but one of the losses came by less than a touchdown. Also, that season Blanda led the league in both completions and passing attempts.

In his second year as a starter in 1954, Blanda started strongly by averaging about two touchdowns per game in the first half of the season. However, he injured his shoulder halfway through the season and had to sit out the rest of the year. Because of this, he lost his job as the Bears' starting quarterback and for the next four years served mainly as the kicker and backup quarterback. Not wanting to be known as just a kicker, Blanda retired from the Bears in 1959.

Blanda returned to playing football in 1960 when the new American Football League (AFL) was formed. Blanda signed with Houston Oilers and earned their starting quarterback job. He led the team to win the AFL championship game in the first two years of the league's existence. In 1961, he was named the Player of the Year for the AFL after throwing for 3,330 yards and setting a pro football record for touchdown passes with 36. The touchdown record stood until 1986, when it was broken by Dan Marino.

Also in that season, Blanda had a game in which he threw seven touchdown passes. Blanda had two other seasons besides 1961 in which he threw for more than 3,000 yards for the Oilers. He also set a record for interceptions thrown in a season with 42, and that record, which is not one that any quarterback would like to break, still stands today.

Blanda remained as the starting quarterback for Houston and led the team in scoring for all of the seven years he played for them. He was also named to the AFL All-Star team four times. In 1967, Blanda was 39 years old and many people, including the Oilers' management, felt that he was too old to play anymore. Feeling that his career was over, Houston released him in March of 1967.

His career was not even close to being finished, though. The Oakland Raiders felt that Blanda could still serve as a valuable kicker and backup quarterback and signed him in July of 1967. In his first season with the Raiders, he proved that he was still and effective kicker by leading the AFL in scoring due to his field goals and extra points. In 1968, Blanda had the honor of being on the Oakland team that played in Super Bowl II; however, they lost the game to the Green Bay Packers.

In 1970 came what is now probably the most well-known part of Blanda's career, when he helped the Raiders win four games and tie one game, most of his heroics coming in the final moments of each contest, over a five game stretch. As the backup quarterback, he had to enter a game against the Pittsburgh Steelers when the starter, Daryle Lamonica got injured. He threw three touchdown passes and kicked a field goal to help Oakland win by 14 points. The following week, he entered a game against the Kansas City Chiefs with three seconds remaining and kicked a 48-yard field goal to secure a tie. In the game after that, against the Cleveland Browns, he threw the game-tying touchdown pass and kicked the game-winning field goal in the final minute and a half of the three-point victory for Oakland. The following week, he led a four minute, 80-yard drive as quarterback against the Denver Broncos that culminated with his game-winning touchdown pass. Finally, in the last game of the stretch, Blanda kicked a field goal at the end of the game that allowed the Raiders to defeat the San Diego Chargers by three points.

Despite starting the 1970 season as a 43-year-old kicker and backup quarterback, due to his clutch performances in helping the Raiders win or tie all of these games, Blanda again received the Player of the Year Award for what was now called the American Football Conference (AFC). At the end of that year, the Raiders lost to the Baltimore Colts for the AFC championship, a game in which he became the oldest player to ever play in a title game. Blanda finally retired from professional football before the beginning of the 1976 season, just a month before his 49th birthday.

When he retired, Blanda held the records for most number of games played in a professional football career with 340 and most points scored with 2,002. Both of those records have since been broken, as was his single-season passing touchdowns record. Notable records that Blanda still holds as of the 2007 NFL season are most number of seasons played with 26, oldest person to play in an NFL game at 48 years and 110 days, and most touchdowns thrown in a game with seven. As of the 2007 season, the seven touchdown record has been tied by others but never broken. Blanda was also the first player to score 2,000 career points and the first player to score 500 points for three different teams. In 1981, he was inducted into the Pro Football Hall of Fame in his first year of eligibility for that honor.

Not only did Blanda did Blanda become a football legend through the statistics he compiled throughout his career, but also through the respect he received from everyone he played with. He earned this respect because of his playing skills, his toughness, and his leadership skills. As quoted in ESPN's Where are they now? article on Blanda, former Raiders teammate Phil Villapiano said of Blanda, "George was one of the all-time classics. He would play under any circumstance, even if he was hurt. I like to compare him to Joe Namath and Johnny Unitas."

In the same article, former teammate George Atkinson is quoted as saying, "George was a thoroughbred. Can you imagine even playing at 43, never mind doing what he did in the 1970 season? What made him so good that year was his preparation. He knew opponents so well that he knew which guy needed the ball based on a certain defense. He was also great at making adjustments at the line of scrimmage." Blanda still receives today the same respect that he earned while he was still playing football.

Shortly after he retired, Blanda wrote an autobiography, with the help of Mickey Herskowitz, entitled Over Forty: Feeling Great and Looking Good! During off-seasons during his career, he had a job as the sales manager of a trucking company, and continued to do this for a few years after his retirement from football. After that, he was a motivational speaker for 15 years, and liked passing on lessons taught to him by some of the legendary coaches he played under, including Bear Bryant in college and George Halas, and John Madden professionally.

According to the Pro Football Hall of Fame, Blanda died after a short illness on September 27, 2010.