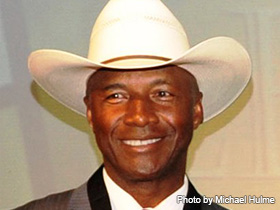 Mel Blount was born April 19, 1948, in Vidalia, Georgia. Blount played 14 years as cornerback with the Pittsburgh Steelers. Blount is a member of the Pro Football Hall of Fame. After retiring, he worked as the Director of Player Relations for the National Football League (NFL), then proceeded to build and maintain group homes for teenage boys in Pennsylvania and in his home state of Georgia.

Mel Blount was born on April 10, 1948, in Vidalia, Georgia. He grew up on a farm and was the youngest of 11 children. He attended Lyons High School in Lyons, Georgia. At Lyons High he excelled at many sports, but stood out enough in football as a cornerback to get him a scholarship to Southern University in Baton Rouge, Louisiana. Blount said he did not really see football as a career choice, just a way to get an education, until his junior and senior years when National Football League (NFL) teams seemed to be interested because he was excelling as a cornerback. Blount was then drafted by the Pittsburgh Steelers in 1970, as the 53rd player selected overall, where he started a few games his first two years and eventually became the starting right cornerback by his third year. In his first year as starter (1972), Blount did not allow a single touchdown all season.

Mel Blount then proceeded to have a 14-year career with the Pittsburgh Steelers from 1970 to 1983. As a Steeler, he had 57 interceptions throughout his career and returned two for touchdowns. He also recovered 13 fumbles and returned two for touchdowns. He made it to five Pro Bowls and was named an All-Pro three times. What he is most well-known for is his pass defense against receivers, the so called "bump and run" coverage. Blount was so strong and fast that he would physically force receivers off of their route, and he was so good at making physical contact to force receivers off their route that the league had to make a rule change midway through his career. The rule is called the "bump and run" rule. Cornerbacks were no longer allowed to make any contact with the receiver after the receiver goes five yards, and they still are not allowed today. Blount helped the Steelers win four Super Bowls: IX, X, XIII, and XIV. He had a key interception in Super Bowl IX against the Dallas Cowboys that led to the Steelers win and was instrumental in their other three wins by preventing the NFL's top receivers from getting the ball. Throughout his 14 year career and 200 games, Blount only missed one game.

After his retirement, Blount became the Director of Player Relations for the NFL and worked in that position until 1990. In 1989, Blount was inducted to the Pro Football Hall of Fame in his first year of eligibility. After leaving his position with the NFL, he became President of Mountaineer Magic Entertainment, Inc., which breeds and races horses. Blount's love of horses can be linked to his upbringing on a farm, and he can also be seen wearing a cowboy hat at all times. Then in 1989, he started a group home in Claysville, Pennsylvania, called Mel Blount's Youth Home of Pennsylvania. The homes have emergency and long-term housing for troubled youths, engaging them in activities and school to help them navigate the system and avoid getting lost in it. Blount has received many service awards and accolades for his efforts and for his contributions to other youth organizations.

Recently, Mel Blount's Youth Home honored Dwayne Woodruff, a former Steelers cornerback, at its annual All-Star Celebrity Roast. In April, Blount was selected to announce the Steeler's 2015 second round draft pick. He says this of his permanent place in football history to Steelers.com writer Teresa Varley, "I am grateful, honored and humbled to be in the Hall of Fame. You start to realize the older you get you are in a special place, a place where your name and legacy will live forever. It's surreal and special and I don't take that for granted."