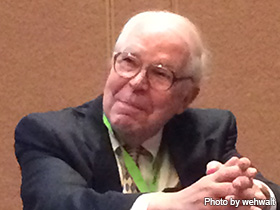 Penn State alum Q. David Bowers is one of the most prolific writers on numismatics (coin collecting).

Born in 1938, numismatist Q. David Bowers is a Pennsylvania State University (Penn State) alum and has been a prolific author on coins, as well as other collectibles. At age 14, Bowers determined the course of his life, a career as a coin dealer.

Numismatist Quentin (Q.) David Bowers was born in on October 21, 1938, in Honesdale. He is the son of Quentin and Ruth Bowers. During his youth in Honesdale, his maternal grandfather sparked young Bowers' interest in coins, giving him an 1893 Columbian half collar. When he was ten years old, the family moved to Forty Fort, in Luzerne County. While there, the local tax collector re-energized his interest in numismatics, his curiosity having led him to explore a number of other fields. In the 1950s, Bowers made the decision that he wanted to become a coin dealer. He told interviewer Ed Reiter that "I've always considered myself to be very blessed, because at the age of 14, I picked my life's work. I've been in coins ever since, and I still enjoy them just as much as I ever did. I've never, ever tired of what I do." Following his high school graduation, he matriculated at Pennsylvania State University (Penn State), eventually earning his BS in 1960. Shortly after, Bowers married Mary Masters in June 1960. The couple had two children before their divorce in 1973.

In the late 1950s, while at Penn State University, Bowers formed a partnership with James F. Ruddy and opened the Empire Coin Company in Johnson City, NY. This venture was highly successful, making the firm one of the leading coin dealerships. After selling Empire Coin in 1965, Bowers formed a partnership with Terry Hathaway and soon became the world's largest music box dealer.

Returning to the world of numismatics, Bowers again partnered with James Ruddy to create the Bowers and Ruddy Galleries in California. During the next decade, they handled the great auctions of the $25 million Garrett collection sale and the $11 million Eliasberg Sale. In 1980, Bowers left the business and moved to Wolfeboro, New Hampshire, partnering with Raymond N. Marena. Bowers' new firm achieved the same sort of success as his old one.

During his entire career, Bowers has written books and monographs on the field of numismatics. As Ed Reiter detailed in 1998, "Bowers has written more than three dozen books -- not counting monographs of fewer than 100 pages." Most of his work would be considered reference to the numismatic field, the sort of work that moved Reiter to dub Bowers "A One-Man Library."

Bowers has also been a collector and scholar of cinematic artwork. Since a 1957 visit to the Pine Street antiques area of Philadelphia, during which he bought a group of silent film posters, he has been an avid collector. His first acquisitions had been posters of films from Biography, Vitagraph and other studios sold by Harvard University to a Philadelphia dealer. Since then he has had added works from a number of other notable collections. He has written books on nickelodeon theatres and silent films, including Nickelodeaon Theatres and Their Music (1986) and Muriel Ostriche: Princess of Silent Films, and Early American Film Production (1987). Another passion of Bowers' that has frequently been the subject of his work is automatic musical instruments.

In 1976, Penn State University's College of Business Business Administration bestowed its Alumni Achievement Award to Bowers. His professional career in numismatics has been highly honored. From 1983 to 1985 he served as president of the American Numismatic Association (ANA), having already been president of the Professional Numismatists Guild from 1977 to 1979. The ANA gave Bowers the Farran Zerbe Award, their highest award and he has been elected to their Numismatic Hall of Fame.

On January 3, 2018, Q. David Bowers debuted weekly blog columns on Coin Update and the Mint News Blog. He has made appearances on channels such as CNN, ABC, and the Discovery Channel, and continues to write notable works online and in print, including Lost and Found Coin Hoards and Treasures (2015) and A Guide Book of Half Cents and Large Cents (2015).