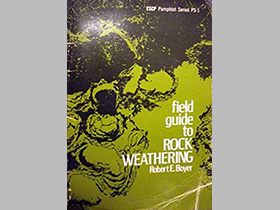 Most of Boyer's books focus on the various types of Earth sciences, such as the 1970s Activities and Demonstrations for Earth Science.

Geologist Robert E. Boyer was born in 1929 in Palmerton. He spent his entire academic career at the University of Texas - Austin in various teaching and administrative capacities. He wrote a number of scientific texts and edited many others. Boyer retired from the University in 1999 and lives in Austin.

Robert Ernst Boyer was born on August 3, 1929, in Palmerton. He was the son of an engineer, Merritt, and his wife, Lizzie. After his secondary education was completed, Boyer matriculated at New York State's Colgate University, earning his B.A. there in 1951. Shortly after graduating from Colgate, Boyer married Elizabeth Bakos in September of that year. The couple had three children.

Boyer proceeded to earn an M.A. degree from Indiana University (Bloomington) in 1954. During the late 1950s, Boyer was an instructor at the University of Texas at Austin, as well as a graduate student at the University of Michigan. His studies were facilitated by a National Science Foundation Fellowship in 1956. He completed his Ph.D. on the "Geology of the Southern Wet Mountains, Colorado" at Ann Arbor in 1959. He returned to Austin, rising through the academic ranks to full professorship by 1967. He would later become the chairman of the Department of Geological Sciences in 1971. He was promoted to the Deanship of the College of Natural Sciences in which capacity he served for 14 years.

During his teaching and administrative career, Boyer was an active writer and editor. He edited the Earth Science Curriculum Project pamphlet series, working with many topics from fossils to beaches. He also wrote textbooks on geology and oceanography. Boyer served as editor for the Texas Journal of Science and the Journal of Geological Education during the 1960s. He would become a "prominent national voice" in geology education, as his retirement announcement stated, by having served as president of a number of organizations, including the American Geological Institute.

Upon his retirement from the University of Texas at Austin in 1999, Boyer was made the Peter T. Flawn Centennial Chair Emeritus in Geological Sciences. The Robert E. Boyer Endowed Presidential Scholarship for Natural Sciences has been named for him at the Austin campus. In 2006, he was inducted into the Jackson School of Geosciences' Hall of Distinction for his contributions to geology at the University of Texas. He still lives in Austin.