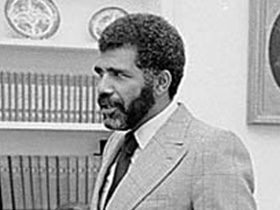 Journalist Ed Bradley was born in West Philadelphia and earned a degree in education at Cheyney University of Pennsylvania. Starting at a local radio station in the mid 1960s, Bradley became one of the first African American journalists on national television as a reporter for 60 Minutes in 1981. His work ranged from reports on the epidemic of homelessness among people with schizophrenia, to researching the fate of Emmett Till, to an exclusive interview with Oklahoma City bomber Timothy McVeigh. He reported for the show until his death in November of 2006. Read more here.

For more information, see the Abstract for links.