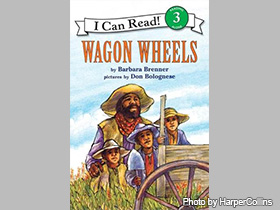 Barbara Brenner was born Barbara Lawrence on June 26, 1925, in Brooklyn, New York. She attended Seton Hall University (formerly College), Rutgers University, New York University, and New School for Social Research. She has also worked as a copyrighter at Prudential Insurance Co., freelance artist's agent, freelance writer, and senior editor for the Bank Street College of Education publications. Her literary career began in 1957 with the publication of Somebody's Slippers, Somebody's Shoes. At the time of this writing, Brenner lives with her husband, artist Fred Brenner, in Hawley, Pennsylvania.

Barbara Brenner is a respected, award-winning author, specializing in works of both juvenile fiction and nonfiction educational material that deals with animals, nature, and ecology. Her interests range from the natural world (i.e. Thinking about Ants [1997]) to American history (e.g. Wagon Wheels [1978]), all of which are reflected in the wide scope of her work. Brenner discussed with Contemporary Authors Online her influences and how they have affected her literary career, concluding that "all the circumstances of my life conspired to make me a writer--just lucky, I guess."

Brenner was born Barbara Lawrence on June 26, 1925, in Brooklyn, New York, to Robert Lawrence (a real estate broker) and Marguerite (Furboter) Johnes. Tragically, her mother died when Brenner was just a year old, and, according to Brenner, this has been a large influence on her career, with Contemporary Authors Online showing how this has added a certain level of "sensitivity" to her work. She also defines Brooklyn as a place which gave much "color" to her work, and where her father's ambitions for her helped to develop Brenner's intellectual curiosity.

Brenner attended Seton Hall University (formerly College) and Rutgers University from 1942-46, whilst also working as a copy editor at Prudential Insurance Co. from 1942-1946. Her freelance work as an artist's agent prepared her for a literary life, as after the birth of her two children she began work on her first book Somebody's Slippers, Somebody's Shoes, published in 1957. She followed this book with an educational picture book entitled Barto Takes the Subway (1961), designed to improve reading comprehension and sight vocabulary

Her artistic development continued when she began to collaborate with her husband, illustrator Fred Brenner, on The Flying Patchwork Quilt (1965). Her next book, On the Frontier with Mr. Audubon (1977), was selected by School Library Journal as "The Best of the Best" among children's books published over 26 seasons. In a review of On the Frontier with Mr. Audubon, Paul Showers wrote in the New York Times Book Review that "Brenner again demonstrates her gift for invention and respect for facts . . . [it is] written in the polite but colloquial language of the frontier sketching in Audubon's biographical background and recording events of the journey as they might have been observed by a serious, very perceptive 13- year-old." One of her best-selling titles was Wagon Wheels (published in 1978), which deals with the trials and tribulations of a close-knit African American family. This true to life story is "exciting and realistic" according to Gisela Jernigan (writing in the children literature journal Booklist), and was named a 1978 American Library Association Notable Book.

Throughout the 80s and 90s Brenner continued to publish, many of her works being influenced by the careers and interests of her sons. Speaking to Contemporary Authors Online Brenner explains that as their sons are both grown, and their respective careers as a "biologist . . . and musician" have both had an influence on her writing (i.e. Dinosaurium [1993]). In 1986, Brenner was honored with the Pennsylvania School Librarians' Association's Outstanding Pennsylvania Author Award. Brenner's most celebrated book is a collection entitled Voices: Poetry and Art from around the World (2001), for which she was chief editor. This book received an ALA Notable Book for Children mention and an ALA Best Book for Young Adults award. According to the Horn Book Guide from Spring 2001, "more than three hundred and fifty poems from six continents evoke the specific and the universal" with contributions from both "celebrated and unknown poets, Nobel prize winners, and children" allowing the book to demonstrate Brenner's skill in celebrating "place" and the "shared feelings" of the people about whom the book is written.

At the time of this writing, Barbara Brenner resides in Hawley, Pennsylvania.