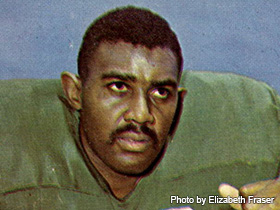 Robert Stanford "Boomer" Brown was born in Cleveland, Ohio, on December 8, 1941. His football career began at Empire Junior High School and continued throughout high school and college. "Boomer" Brown is known for being one of the greatest offensive tackles who ever played professional football. Brown played for the Philadelphia Eagles and other teams during a 10-year career. He was selected for six Pro Bowls during his time in the League and was elected to the Hall of Fame in 2004.

Robert Stanford "Boomer" Brown was born on December 8, 1941, in Cleveland, Ohio. He credits his mother and father "for the great gene pool that they provided, and the unwavering verbal, moral, and spiritual support that was always there and so freely and lovingly given." His football career began in the eighth grade at Empire Junior High School, the beginning of Brown's love of the game. After junior high, he went to East Tech High School, a school known for track and basketball and not so much football. Brown says he was not a star there and at best maybe better than an average player. Brown was offered and accepted an athletic scholarship from the University of Nebraska, bringing him into an academic and athletic college program he believes is one of the best in the country.

In 1964, Brown signed with the Philadelphia Eagles. He was the second overall draft pick by the Eagles in the 1964 National Football League (NFL) Draft. He stated his professional goal was: to be the best tackle ever to play in the National Football League. The way he played earned him his nickname "The Boomer;" he hit hard and made a lot of tackles. He was called that ever since his rookie year with Philadelphia. Eagles History columnist and Emmy-winning writer and producer Ray Didinger recounts how he got his nickname: "At the snap, Brown shot forward with fearsome force. The impact, it was said, sounded like an explosion. That's how he got the nickname 'Boomer.'"

Teammate and Hall of Famer Ron Mix told Sports Illustrated in 1972 that "offensive tackle is the most unacknowledged position in all of the sport. It is also one of the hardest." Brown was one of the most feared offensive tackles in the NFL. "Boomer" said that the only time he was get recognized was when he failed, and that was when the defensive end would get around him and sack the quarterback. Brown was disappointed that he did not make the Pro Bowl in his rookie year. However, he did go on to play in a total of six Pro Bowls.

"Boomer" dedicated himself to only football; he told the Philadelphia Inquirer in 1966, "This is a year-round job. Some people don't realize that, but it is. It's truly a profession, and it is a highly competitive field. The only commodity I have to sell in the field is my body, and if I don't keep it in its best shape, the day would come quickly when nobody would be hearing about Bob Brown." Brown was always training during the offseason because contracts were so small and incomparable to what the contracts are now. Football players in the 1950s had to take off-season jobs because the contracts were so small.

After five seasons in Philadelphia, Brown demanded to be traded, citing unspecified "personal" reasons. An Associated Press report printed in the Fredericksburg Free Lance-Star recorded Brown saying that "I have no intention of airing my grievances...I want to leave without recriminations, just as quietly as possible." He was traded to the then-Los Angeles Rams, eliciting an excited reaction: "I'm so ecstatic I can hardly find words to describe my feelings." He played three seasons with the Rams and then two seasons with the Oakland Raiders.

According to Ray Didinger, Oakland coach John Madden said that "Bob was the most aggressive offensive lineman that ever played." Brown's own football philosophy would seem to confirm that judgment: "I dislike every man I play. I may not even know the guy, but I dislike him because he is standing between me and All-Pro, between me and my paycheck." In 2004, he would refer to this style as "super aggressive Def Con 5."

All told, Brown played 126 games and started in 110 of those. Brown played 50 straight games for the Eagles before suffering a knee injury in 1967 that bothered him through much of the rest of his career. He used his size and strength to stop the hard-charging defensive players. Legendary Rams defensive end Deacon Jones said of him: "Bob Brown had a cold-blooded mentality. He'd kill a mosquito with an ax."