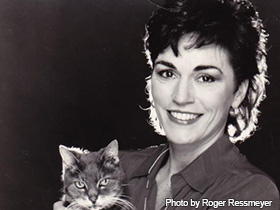 LGBT activist Rita Mae Brown is famous for her novel Rubyfruit Jungle (1973) and for coauthoring other books with her cat.

Rita Mae Brown was born on November 28, 1944, in Hanover, Pennsylvania. Her family later moved to Fort Lauderdale, Florida, where she attended the University of Florida. Brown then moved to New York and received a BA degree in English and the classics and went on to receive a PhD from the Institute for Policy Studies in Washington, DC. In 1973, she published her renowned novel Rubyfruit Jungle. During the 1970s, Brown cofounded the Furies and the Student Homophile League. In 1982, Brown was nominated for an Emmy and, went on to win the Guild award. Brown later began to write novels coauthored with her cat Sneaky Pie. At the time of this writing, Rita Mae Brown resides on her farm in Charlottesville, Virginia.

Rita Mae Brown was born on November 28, 1944, in Hanover, Pennsylvania, to an unwed eighteen year old girl. Once having given birth to Rita Mae Brown, her birth mother felt she was unfit to be a parent and decided to turn over her newborn child to an orphanage. When Brown was three months old she was adopted by Ralph and Julia Ellen Brown and grew up in York, Pennsylvania. As a young child, Brown demonstrated an interest in literature and learned to read at the age of three. At the age of eleven Brown and her family moved to Fort Lauderdale, Florida. Throughout her high school years Brown excelled academically and was actively involved in various sports. At the age of fifteen, Brown lost her father and during this same time in her life she began to experiment sexually with both males and females. As a result Brown was often cast aside.

Once Rita Mae Brown graduated from high school, she attended the University of Florida. Her scholarship was later revoked and she was expelled in 1964. Brown was said to have been reprimanded for her involvement in the civil rights movement. However, the real reason behind her expulsion was her sexual orientation. It had come to light due to a comment she made to one of her Delta Delta Delta sorority officers, where she openly stated that she did not care whether she fell in love with a man or a woman.

After having been expelled, Brown hitchhiked to New York in the summer of 1964. Once she arrived in New York, she lived in an abandoned car with a man and a cat she named Baby Jesus. She became an early member of the National Organization for Women (NOW), from which she was later expelled for insisting on more recognition for lesbian constituents. Brown later received a scholarship to New York University (NYU). In 1968, she graduated with a bachelor of arts degree in English and the classics. Brown continued her education in the New York School of Visual Arts where she received a degree in cinematography. In 1973, she went on to receive a PhD from the Institute for Policy Studies in Washington DC.

Rita Mae Brown's career as an American writer began while she was attending NYU. At this point in her life, Brown found herself resigning in February 1970 from NOW due to anti-lesbian comments made by Betty Friedan and NOW's attempt to distance itself from lesbian organizations. During this time she also published two collections of feminist poetry known as The Hand That Cradles the Rock (1971) and Songs to a Handsome Woman (1973).

In 1973 she also published her most notable and controversial novel, Rubyfruit Jungle. This novel eradicated the stereotype many people had of lesbian women at the time. It is a coming of age story about a lesbian named Molly Bolt. Molly is born a bastard child and is adopted by a poor southern couple who want something better for their daughter. Molly plays doctor with the boys and loses her virginity to her girlfriend. She later goes on to attract the head cheerleader of Ft. Lauderdale. Soon after, she is booted out of college for moral turpitude, and an unrepentant, penniless Molly moves to New York. In New York, Molly goes on to charm a number of women. Rubyfruit Jungle was at first rejected by all major publishing companies in New York but was finally published by the small feminist Daughters Press. When the novel was first published, it was said to be autobiographical; however, Brown states that her character is fictional. She goes on to say that the novel, "parallels aspects of my life, or at least intellectual concerns I had at the time."

For the duration of the 1970s Brown went on to write many more novels. In 1971 she cofounded The Furies, a lesbian feminist newspaper collective that stated that heterosexuality was the root of all oppression. She also went on to cofound the Student Homophile League. As her professional career took off she also found herself falling in love with tennis star Martina Navr?Ïtilov?Ï. This relationship became very controversial since both of the women were wellknown and successful. Despite the controversy, Martina and Rita Mae Brown moved in together in 1979. Rita Mae Brown was nominated for an Emmy in 1982. That same year, she went on to win the Writer's Guild award for I Love Liberty, which was nominated for Best Variety Show, Television.

Brown's relationship with Navr?Ïtilov?Ï inspired her and she went on to write Sudden Death (1983), a novel based on a life within women's tennis circuit. Unfortunately, by 1981 the relationship was over and Brown moved to California to write television scripts. In 1986, she coauthored the script for the television movie My Two Loves and then went on to narrate the documentary Before Stonewall, since she had previously participated in riots. The Stonewall riots were a series of violent conflicts between New York City police officers and LGBT groups that began on June 28, 1969, and lasted several days.

Despite the losses, Brown went on to write Southern Discomfort (1982), High Hearts (1996), Bingo (1988), Right Shotgun (1996), and many other novels. During the 1990s, she developed a new creative way of writing. She began to write novels coauthored with her cat, Sneaky Pie Brown. One of her most wellknown works written by her and Sneaky Pie Brown is Catch As Cat Can which was published in 2002. It is a mystery novel which focuses on the annual Dogwood Festival which is approaching the small town of Crozet, Virginia. Mary Minor "Harry" Haristeen, her two cats, and her dog are some of the many residents of Crozet who look forward to the annual festival. Prior to the annual festival, a number of unexpected events began to take place which ultimately led to a mysterious death. These occurrences lead Harry to try and solve the crime.

Brown and Sneaky Pie went on to write a number of mystery novels known as the "Mrs. Murphy mystery series," some of which are Wish You Were Here (1990), Rest in Pieces (1992), Murder at Monticello (1994), Pay Dirt (1995), and many others. Her passion for horses, hounds, and fox-hunting led her to write Hotspur, Full Cry, The Hunt Ball, and The Hounds and the Fury. Her work as a screenwriter includes the film Slumber Party Massacre (1982), which was initially a parody of the slasher genre but turned serious by producers and at least five screenplays and two teleplays.

At the time of this writing, Rita Mae Brown lives in Afton, Virginia, where she continues to work on her literary career.