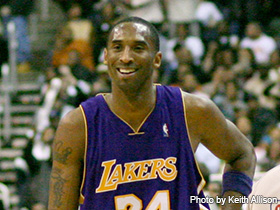 The Los Angeles Lakers' Kobe Bryant was drafted directly from Lower Merion HS, the first guard to join the NBA so early.

Kobe Bean Bryant was born in 1978 in Philadelphia, Pennsylvania. He was an All-Star shooting guard in the National Basketball Association, playing for the Los Angeles Lakers. He was the son of former Philadelphia 76ers player and former Los Angeles Sparks head coach, "Jellybean" Bryant. Kobe rose to fame in 1996 when he became the first guard in league history to be drafted out of high school. Along with teammate Shaquille O'Neal, Kobe and the Lakers won three consecutive NBA championships from 2000 to 2002. After the departure of O'Neal following the 2004 season, Bryant became the face of the Lakers' franchise. On January 26, 2020, 41-year-old Kobe Bryant and his 13-year-old daughter Gianna died in a helicopter crash near downtown Los Angeles.

Kobe Bean Bryant was born on August 23, 1978, in Philadelphia, Pennsylvania. His parents, Joe and Pam, had two girls named Sharia and Shaya, making Kobe the third and final child. Kobe's dad, Joe Bryant, was a playground legend from Philly's John Bartram High School who never quite found his place in the NBA. After graduating from La Salle University, "Jellybean Joe" got bounced around from the Golden State Warriors, who refused his contract demands, to Philadelphia, to the San Diego Clippers (now located in Los Angeles) and Houston Rockets, where he averaged 8.7 points along the way. It was on the west coast in Southern California where Kobe developed a strong love for the game of basketball. He was already telling people that he would be an NBA star by his third birthday.

Kobe started gaining a better understanding of what his dad did for a living when the family moved to Houston after Joe was dealt to the Rockets. At this point, Kobe started following the NBA seriously. His favorite player was Magic Johnson, a player who, like Kobe's dad, was a point guard in a power forward's body. Joe's stay in Houston lasted for only one season. When the Rockets did not renew his contract, he signed with a team in Rieti, Italy. The move proved to be a meaningful bonding experience for Kobe and his sisters. Since they were stuck in a foreign country and unable to speak the native language, they relied on each other to get by. Within a few months, all three were fairly fluent in Italian.

In the meantime, Joe was hitting his stride in the pro ranks and started to score 30 to 40 points a night. Seeing his father thrill crowds by his stylish play further inspired Kobe to dream of a career in the NBA. He got a chance to display his skills each summer, when the Bryants flew back to visit family and friends in Philadelphia. From the age of 10, he competed in the city's Sonny Hill League and received counseling from his father and Pam's brother.

After Joe retired, the family decided to make a permanent return to the United States. At this point, Shaya and Sharia were thinking about college, and Kobe was ready to begin high school. Joe accepted an assistant coaching job at La Salle University and the Bryants bought a house in Ardmore, about 10 miles outside of Philadelphia on the Main Line. Entering Lower Merion High School, Kobe made the Aces varsity basketball team as a freshman. By his junior year, Kobe was feeling comfortable in his surroundings. At 6'5, he decided his basketball future was in the backcourt and began to think and practice like a guard. Coach Gregg Downer liked the mismatches that this presented to opponents. He claimed, "I've seen a lot of high school basketball, but I've never seen anyone as good as Kobe was."

During Bryant's junior year of high school (1994-1995), he averaged 31.1 points, 10.4 rebounds, and 5.2 assists and was named Pennsylvania Player of the Year. The senior-to-be also put up excellent grades and SAT scores, bringing college recruiters from across the country knocking on his door. At the top of the list were North Carolina, Duke, Villanova, and Michigan. However, after high schooler Kevin Garnett went in the first round of the NBA draft in June of 1995, Kobe began to consider heading straight for the pros. As a senior, his play put Lower Merion on the high-school basketball map, helping them to a 32-3 record and their first state title in 42 years. Kobe finished the year with a scoring average of 30.8 points, bringing his high school career total to 2,883 and shattering the Pennsylvania school record set by Wilt Chamberlain.

Bryant ended all speculation that spring at a press conference in the Lower Merion gym when he announced that he had decided to take his talents to the NBA. Shortly after he signed on with the William Morris Agency, he signed multi-year endorsement deals with Adidas and Sprite. The news created mixed reviews. While some sports writers believed that Kobe was ready, others criticized Joe and Pam for pushing their son into a bad decision. The debate began about whether Bryant, like Garnett, would be a lottery pick in the draft.

The Los Angeles Lakers and their president, Jerry West, were among the teams convinced that Kobe was destined to be a star and considered his upbringing to be an advantage. After picking up Derek Fisher in the 24th pick in the first round, he called the Charlotte Hornets (now located in New Orleans), who had taken Bryant with the 13th pick and arranged a trade for Vlade Divac. This created extra salary space which Los Angeles used to sign Orlando free agent Shaquille O'Neal. With that, the Lakers dynasty was set in place. Kobe was starting his pro career with his favorite team, playing alongside the likes of Nick Van Exel, Elden Campbell, and old friend Eddie Jones. He would be coached by Del Harris, who had been the head man in Houston during Joe Bryant's one season there.

Kobe signed a three-year $3.5 million contract with the Lakers, bought a home in Pacific Palisades, and had the family move out to California with him. In January of his first season, a thinning roster forced Harris to start Bryant, making him at 18 years, five months and five days, the youngest starter in NBA history. During the All-Star Weekend, he set a record with 31 points in the Rookie Game and won the Slam Dunk Contest. NBA legend Michael Jordan praised Bryant saying, "I see a lot of myself in him. No doubt about it." In the 1997-1998 season, Bryant became the team's sixth man. Kobe played between 20 and 30 minutes a game and brought his scoring average up to nearly 18 points per game. That year, he became the youngest All-Star in league history.

In the midst of the lockout of 1998, Kobe invested time cutting a hip-hop CD which was never released. He also met Vanessa Laine, a teenage dancer appearing in a music video being filmed in the same building. They eventually married in the spring of 2001. Kobe meanwhile found his spot in the starting lineup and was given Third Team All-NBA Honors. That year the Lakers lost in the playoffs that year to the San Antonio Spurs. It was then that head coach Phil Jackson was brought in to help find a way to make Kobe and O'Neal see eye-to-eye. This led the team to world championships in three consecutive years and Kobe to becoming a four-time All Star.

Bryant's career, however, would not be all roses. In the 2002-2003 season, LA struggled to regain its championship form after O'Neal returned from an injury and ended up going down to San Antonio in the second round of the playoffs. After six years of building upon a spotless image, Kobe was accused of sexual assault by a 19-year-old girl in Colorado. Kobe acknowledged that the two engaged in sex, but contended that it was consensual. Despite settling out of court, Kobe's marketing appeal had taken a giant blow.

The 2003-2004 season saw Bryant average 24 points per game coupled with a loss to the Detroit Pistons in the NBA Finals. After this season, Jackson resigned as coach and O'Neal was traded to the Miami Heat. Bryant was all that remained out of the starting five that made it to the finals. The only highlight of the '04-05 season for the Lakers was the first meeting between the Lakers and Heat, on Christmas Day. Despite Bryant scoring 42 points, Miami won the game in overtime. This was one of 48 losses the Lakers had endured amidst their last place finish in the Pacific Division.

The return of Phil Jackson in the 2005-2006 season helped to better the Lakers chances. He saw Bryant and Lamar Odom as his new Michael Jordan-Scottie Pippen combination (Jackson's star players from his tenure as the coach of the Chicago Bulls). Bryant finished the year as the NBA's scoring champion and averaged 35.4 points per game. The team finished with a 45-37 record before going down to the Phoenix Suns in the playoffs. Injuries have prevented the team from flourishing in the season, yet they still hung around close to the top of the division until hitting February. Bryant went head-to-head with Lebron James in the All Star Game, leading the West to a victory and being named the game's MVP. "Kobe's a model of what a young player should aspire to be. Year by year he learned and made his game more solid, and now he's not just a highlight-film guy but an accomplished NBA player," said former NBA head coach Larry Brown.

Kobe's leadership skills were put to the test after the departure of Shaquille O'Neal. The question remained if he could bring another NBA title to LA without a proven big man by his side and elevate the game of his team. Hope surfaced in the 2007-2008 season when the Lakers made it to the NBA Finals. Bryant had been playing despite suffering from an injured pinky finger on his shooting hand. Coupled with bad luck, the Lakers took a hit from the Celtics and lost, 131-92.

Later in 2008, Bryant played in the Summer Olympic Games in China alongside LeBron and Dwayne Wade. The American team won gold in a 118-107 victory, an accomplishment that has not happened since 2002. During the 2008-2009 season, Bryant was ready to win. His moves and scores enabled him to be named the Western Conference Player of the Month for both December and January. After much strife and determination, Bryant and his team won the NBA finals and Bryant was named MVP. Then in the 2009-2010 season, the Lakers won the NBA finals and Bryant was named MVP again, even after he missed nine games from injuries to his back and fingers. Also in 2009, Bryant was recognized for being the first player since Michael Jordan to score more than 25,000 points. In 2011, he was named All-Star MVP for the fourth time.

Along with the fame and talent, Bryant continued to get into trouble. During the 2010-2011 season, Bryant was fined $100,000 by the NBA for supposedly throwing out a gay slur at a referee. He later apologized for his comment and appealed the fine. His marriage to Laine came to a halt when she filed for divorce on December 16, 2011.

On January 26, 2020, 41-year-old Kobe Bryant and his 13-year-old daughter Gianna died in a helicopter crash near downtown Los Angeles. Bryant is survived by his ex-wife, their daughters Natalia, Bianka, and Capri, and his parents.