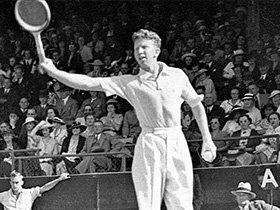 Born in Oakland, California, on June 13, 1915, Don Budge began tennis at a late age of 14. He made his debut as an amateur in 1936 and went on to win the Grand Slam of 1938, the first player ever to win all four major tournaments in the same year. He was injured running an obstacle course during World War II, but continued to play tennis in the professionals. Once his career in tennis was over, he led a quiet life with his wife. Budge died in a hospital in Scranton, Pennsylvania, on January 26, 2000.

Pro tennis player and war veteran Don Budge was born on June 13, 1915, in Oakland, California. The son of a soccer player, Budge was always more interested in other sports than tennis. However, he soon came to find he was a natural at it and began to love the sport. He began an education at the University of California, but left to play tennis for the U.S.

Though he hadn't played the sport for very long, Budge quickly climbed the ladder to the top. At a young age of only 19, he was named to the U. S. Davis Cup team. In 1936, Don Budge was already playing in Wimbledon, but lost against the number one ranked player in the world, Fred Perry. The next year, Perry turned pro, making Budge the number one amateur.

In 1937, Budge helped to get the United States its first Davis Cup victory in 11 years. In his book, Don Budge: A Tennis Memoir, referring to the final match of Budge versus Baron Gottfried von Cramm, Budge quotes Walter Pate (the United States team captain), saying "No man, living or dead, could have beaten either man that day." He also won the Wimbledon singles, doubles, and mixed doubles championships that year and the next. In 1938, Don Budge dominated the Australian final, French final, and U. S. Nationals. This made him the first amateur to ever win all four Grand Slam tournaments in the same year.

Following this streak of dominance, he decided it was time to turn pro in 1939. Budge continued to play with amazing talent, but his career was declining. Soon after, in 1942, he entered the Air Force. In military training, Budge suffered a shoulder injury. Now that he was getting older, and with a shoulder injury, he could never hope to be at the top of his game again.

Even after his career peaked, he was still known as a great player. He was said to have an extremely hard serve (partially due to his height, 6'1"), and one of the most, if not the most, powerful backhands ever seen in the sport. He was even said to have been very well mannered and would never throw temper tantrums like some of the more-recent players. His ability in his peak years was so great that in January 1937, he began a streak of wins that lasted 92 matches until he finally lost in late 1938.

In 1964, Don Budge was inducted into the International Tennis Hall of Fame. To be nominated for induction, a player must have "a distinguished record of competitive achievement at the highest international level, with consideration given to integrity, sportsmanship, and character." To be inducted, a panel of the international tennis media votes on recent nominees, and a 75% favorable vote is required. After he retired, he led a quiet life with his wife, Loriel, and lent his support and advice to two tennis organizations: the Pike Tennis Association and the Don Budge Tennis Grand Slam Program, both of which were headquartered near his home in Dingman's Ferry, Pike County. Later in his life, Don Budge's car struck a tree in the Pocono Mountains on Tuesday, December 14, 1999. Rescue crews had to cut him from the wreckage, and he was airlifted to St. Francis Hospital in Poughkeepsie, New York. He broke his leg, and may have suffered other internal damages. He never recovered from the crash and died early the next year on January 26, 2000, in a nursing home in Scranton, Pennsylvania. Budge was survived by his wife and his two sons, David and Jeffrey.