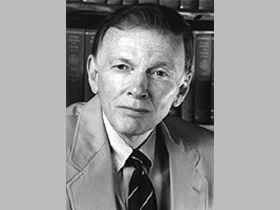 Historian and Political Scientist Russell D. Buhite was born in Reynoldsville in 1938. He has become a well-respected writer on American foreign policy and terrorism. A 1973 nominee for a Pulitzer Prize, Buhite currently teaches history at the University of Missouri-Rolla.

Russell D. Buhite was born in Reynoldsville, Pennsylvania, on July 19, 1938. Following high school, he matriculated at Clarion State College (now Clarion University), earning his B.A. there in 1961. While at Clarion, he was married in 1959. The couple had three children. After his time at Clarion, Buhite earned his M.A. at Ohio University in 1962 and his Ph.D. at Michigan State University in 1965. He has spent his professional life in academia.

Buhite has held a series of academic appointments since 1965. He taught at the University of Tennessee for seven years and at the University of Oklahoma for ten. During his teaching career, he has written a number of books about American foreign policy, with a particular concentration on the period around World War II and the subject of the Far East. In 1973, he was nominated for the Pulitzer Prize in Biography for his book on Patrick J. Hurley. That event brought him Clarion University's Distinguished Alumni Award the next year. Buhite left the University of Oklahoma in 1997 to become the Dean of the College of Arts and Sciences at the University of Missouri-Rolla, a post he held until 2002 when he returned to teaching that school's History Department. His most recent book is 2003's Calls to Arms: Presidential Speeches, Messages and Declarations of War, a rhetorical analysis of 24 different messages of war given by presidents from John Adams to George W. Bush.

Buhite continues to teach at the University of Missouri-Rolla's Department of History and Political Science.