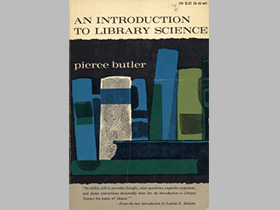 Best known for his writing on librarianship, Pierce Butler resided in Blossburg, where he wrote and worked as a preacher.

Born in 1884, Lee Pierce Butler spent much of his life studying ways to make libraries more efficient for librarians. He was well-educated in library science and collected many rare and valuable books. After marrying fellow librarian Ruth Lapham, the two shared a collection of rare books. Butler was killed in a car accident in 1953.

On December 19, 1884, in Clarendon Hill, Illinois, Lee Pierce Butler was born. His father, John Pierce Butler, was a railroad clerk, and his mother, Evaline Content Whipple Butler, was a station agent and postmistress. Butler began his education at Dickinson College in Carlisle and graduated with a degree in philosophy. Next, while working concurrently, he attended Union Theological Academy to study Hebrew, Greek, and theology. He also attended Columbia University as a special student. He eventually obtained his masters and doctorate degrees. Butler worked many jobs, including being a preacher at the First Methodist Church in Blossburg, Pennsylvania. It was at this time in his life that he decided to go by his middle name Pierce. He returned to Illinois to work at the Newberry Library in Chicago, which is where he wrote his first scholarly work, Checklist of Incunabula in the Newberry Library, Compiled for the Use of the Library Staff. He developed an interest in incunabula, or rare books.

Through his interest in rare books, Butler acquired several very old and rare books for the Newberry Library. These rare books included Jacobis Magnis' Sophologium, printed in 1495 and Geoffrey Chaucer's The Canterbury Tales, printed in 1490. Butler also spent a lot of time in the church studying theology and serving as a deacon. He became an ordained minister in 1940. On June 29, 1926, Butler wed Ruth Lapham.

Butler was a scholar's scholar; he wrote and researched to ease librarians' work. By contributing to the librarian community, he promoted "scholarship and wisdom in the individual and in the community." Throughout his schooling he was awarded many scholarships and fellowships, and he was known to be extremely well-read. Butler received the Turrentin Prize in Ecclesiastical Latin while working on his MA.

Butler tragically died in an automobile accident on March 28, 1953, while near Burlington, North Carolina.