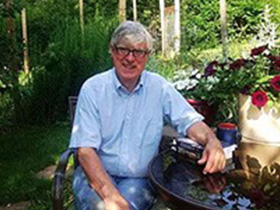 Born in New York State, Jan Cheripko has contributed to the Wayne County area of Pennsylvania through his work with students and his writing for them. He specializes in works relating to the outdoors and to sports. At the time of this writing, he and his family live in Bethany, a borough of Wayne County.

Jan Cheripko was born in West Point, New York, on August 13, 1951. His parents are John Cheripko, a soldier, and Frances Cheripko, a homemaker. On May 24, 1981, Jan Cheripko married Valray Lynn Wills, with whom he had one child, Julia.

Cheripko attended Orange County Community College from 1970-1972 and then continued on to earn his BA in 1974 from St. Thomas Aquinas College in Sparkhill, New York. He began his career as a reporter and editor for newspapers in New York. Since then, he has been invited to speak to students, educators, and parents around the nation about the issues he sees on a daily basis, which include writing, literature, heroes, and at-risk students. He has also been a featured speaker at the National Council of Teachers of English, the International Reading Association, and the American Association of Adolescent and Children Psychiatrists. Cheripko taught English at the Allynwood Academy (formerly The Family School), a private school in update New York that specialized in educating at-risk teens but was later shut down in August 2014 as a result of child abuse investigations.

Cheripko's work is derived from his experiences growing up, as well as those he has had later in life. Cheripko's first book, Voices of the River: Adventures on the Delaware (1994), is about a 215-mile, 10-day canoeing trip down the Delaware River that he and a 14-year-old boy took from Hancock, New York, to Philadelphia, Pennsylvania. The year of its publication, the book received the Upper Delaware Council Special Award (Upper Delaware Heritage Alliance).

His book Imitate the Tiger (1996), which is a young adult (YA) novel about a high school football player, received the Joan Fassler Memorial Book Award. This award is presented each year by the Association of the Care of Children's Health. Imitate the Tiger was also named an International Reading Association Best Book for Young Adults and a Parents' Media Guide Choice, and has received many other awards and nominations, including being among the New York Public Library Best Books for Teens.

At the time of this writing, Jan Cheripko, according to his website, is semi-retired and leads ocassional writing workshops sponsored by the Highlights Foundation at The Barn at Boyds Mills, a 5,200-square-foot retreat in the northeastern Pennsylvania Pocono Mountains. He is also a member of the Bethany Borough Council, Bethany Borough Library Board, and Delaware Company Board of Directors.