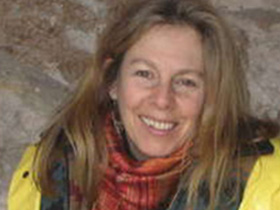 Born in Philadelphia, Lynne Cherry is an acclaimed children's book author and illustrator.

Born on January 5, 1952, in Philadelphia, Lynne Cherry attended the Tyler School of Art at Temple University in 1973. Beginning her career in children's literature as an illustrator in 1976, Cherry has expanded her expertise into the art of writing, becoming a well-respected author of juvenile fiction, renowned for books that feature her respect and concern for the natural world. Cherry's most celebrated books include The Great Kapok Tree: A Tale of the Amazon Rain Forest (1990), the mythic The Dragon and the Unicorn (1995), and Flute's Journey: The Life of a Wood Thrush (1997).

Lynne Cherry was born in January 5, 1952, in Philadelphia. Cherry is the daughter of Herbert, a pharmacist, and Helen Cogan Cherry, an illustrator. She demonstrated an aptitude for art early in her life, leading her to join the Tyler School of Art at Temple University.

Cherry graduated from the Tyler School of Art in 1973 and moved to New York. This move afforded her the opportunity to go into publishing, where there were plenty of available positions. Cherry was hired by Platt & Munk (based in the Bronx), where she worked as a paste-up artist and designer. In 1973, Cherry moved to Harcourt Brace Jovanovich to work as a book designer. She left her next job, doing illustrations for Xerox Education Publications in Connecticut, to become her own boss; in 1975, at the age of twenty-three, she began devoting her time to illustration.

Cherry's first freelance illustration job was for Carolyn Meyer's Coconut: The Tree of Life. Following her successful start, Cherry began to provide more artwork for various publications. Throughout the course of her career, she has provided artwork for authors such as Judith Viorst, John McCormack, Joanne Ryder, and Ron Roy, as well as for organizations such as the National Wildlife Federation. Cherry's illustration style has been strongly influenced by her study of such classic illustrators as Maurice Sendak, Edmund Dulac, Carl Larsson, and Aubrey Beardsley, as well as her teacher, Stanislaw Zagorski.

Continuing her illustration work, Cherry also decided to try her hand at writing. Her first publication was her 1988 Who's Sick Today? Following this effort, Cherry's vivid imagination proved adept at creating more entertaining stories such as The Armadillo from Amarillo (1999), a book that Children's Literature writer Susie Wilde said had "interesting perspectives and points of departure that encourage active thinking about ecology." Cherry's illustrations, featuring desert plants and animals, and several endangered species of wildlife, are what bring this story to life, fully demonstrating her talents at connecting with her specific audience.

The most successful of Cherry's works have been her children's books that deal with the natural world. In The Great Kapok Tree (1990), readers watch as a woodsman rests in the jungle. As he sleeps, various animals beg him to change his mind and spare the tree and consequently their threatened forest home. Cherry traveled to Brazil to provide her audience with an accurate and entertaining view of rainforest ecology. According to Donna Rainboth, "The outstanding illustrations in Lynn Cherry's tale will invite elementary level children and adults alike to read this book." She goes on to describe how Cherry introduces scientific concepts such as "pollination, erosion, food webs, and oxygen production" as students "learn about the roles played by different plants and animals in a tropical rainforest, concepts that can easily be transferred to any natural habitat."

In Flute's Journey: The Life of a Wood Thrush (1997), the author-illustrator follows the migration of a young wood thrush from a Maryland forest preserve, to Costa Rica, and back again. Debra Briatico concludes that "not only does this reverent environmental tale describe the perils faced by today's migratory songbirds (e.g. insects tainted with pesticides and a shrinking habitat), but it also presents a stunning account of the factors that ensure their survival (e.g. instinct, luck, and help from people who are working to protect habitat destruction)." Mary Sue Preissner, writing for Children's Literature, also reveals that "in line with her environmental conservation views, Cherry donates a portion of the proceeds of this publication to protecting native forests." This whole-hearted approach is what makes Cherry such an engaging author.

Lynne Cherry has served as an artist-in-residence at the Smithsonian, Geosciences departments at the University of Massachusetts and Cornell University, Marine Biological Lab, Woods Hole Oceanographic Institute, and Princeton Environmental Institute. Her books have been used as platforms for launching environmental campains in middle grade classrooms, and she has presented numerous educational workshops on the topic of environmental awareness.