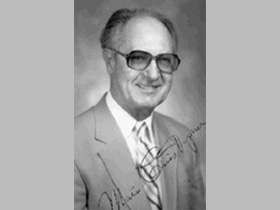 Popular children's author Matt Christopher, best known for his many sports-themed works, was born in Bath in 1917.

Born in Bath, Pennsylvania in 1917, Matt Christopher has become the best selling sportswriter for children. Raised in Ludlowville, New York, Christopher began writing detective novels in 1940. Between working many labor jobs, Christopher discovered his real passion for writing about his favorite topic: sports. Twelve years after writing his first adult novel, he tried his hand at children's literature and The Lucky Baseball Bat was published in 1952. Over the course of 34 years, Christopher wrote over 120 novels, most of which became best sellers. Matt Christopher died in Charlotte, North Carolina, on September 20, 1997, from a brain tumor.

Born to Fred and Mary (Vass) Christopher on August 16, 1917, Matt Christopher was educated in New York before marrying Catherine M. Krupa in 1940. Christopher was the oldest of nine children, his mother a Hungarian immigrant and his father a coal mill worker. From an early age, Christopher enjoyed writing and tried his hand at detective novels in 1940. None of these stories were accepted by publishers right away, and Christopher worked many different jobs; throughout New York from 1935-1973, he worked as a laborer, assembler, adjuster, group leader of assembly, technical editor, production planning, semi-professional baseball player, publicity director, bulletin editor, and finally a full-time writer.

In his childhood, Matt Christopher developed a deep appreciation and interest in baseball. Though he and his friend did not have the proper equipment to play, Christopher made do with stones as bases, tennis balls as baseballs and broom handles as bats. When Christopher played on his high school baseball team, he became known as an "excellent base thief." While writing a few detective and adventure, Christopher played minor league baseball in Canada, first with the Smith Falls, Ontario team and later with other teams until he was caused to retire due to an injury.

It was at the age of 14 that Christopher began writing poetry and short stories. At eighteen, he entered one of his stories in a Writer's Digest short-story contest; although he placed 191st out of 200, he was only inspired to write more. Working full-time days in his labor-intense jobs and playing semi-profession baseball at night, Christopher still managed to find time to write one detective story a week for a year. Selling his first detective story for fifty dollars, Christopher found himself in the business of writing.

Matt Christopher's first children's book, The Lucky Baseball Bat, was written and published in 1954 after revising some baseball notes he had written during a lunch break. The story chronicles a young boy who wants to join the baseball team and with the help of a lucky baseball bat, is able to realize his dream. He went on to write over 120 children's books, published at Little, Brown. Although he has had other successes with stories like Basketball Sparkplug and The Spy on Third Base, it was his original novel that placed him among the great children's authors. "Christopher's novels have provided an important bridge from early readers to middle-grade novels for many struggling readers," says book critic Terri Schmitz.

Matt Christopher's novels are coveted by parents and teachers, because they enable reluctant readers to pick up a book. Although he is most famous for his work about all sports, Christopher has added more contemporary issues to his stories over the years, such as divorce and adoption. However, in all of his novels, children are faced with tough issues and average people show courage and persistence that lets them achieve their goals in everyday life.

Over his eighty years of writing, Christopher wrote screenplays and a comic strip for the Treasure Chest Magazine, which ran for six years. He also wrote a one-act play, as well as some sports biographies. In the fall of 1985, Christopher was diagnosed with a brain tumor, which blurred his vision. After a removal of the tumor, the symptoms returned and he underwent radiation therapy. Following a spell of healthy years, the tumor recurred in 1993, and Christopher underwent three complicated operations. Suffering from complications from his third surgery, Matt Christopher died on September 20, 1997 in Charlotte, North Carolina at the age of eighty.