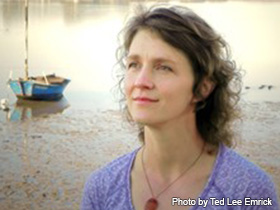 Lisa Coffman was resident poet at Bucknell University in Lewisburg. She has published her poetry in Likely: Poems.

Lisa Coffman was born in East Tennessee in 1963. She has studied and received degrees at such prestigious universities as New York University, the University of Tennessee, and the University of Bonn in Germany. In the 90s, she spent a considerable about of time in Pennsylvania where she contributed to Philadelphia's City Paper frequently, taught as a Professor of English at Pennsylvania State University‚ Altoona, and spent a year as Poet in Residence at Bucknell University's Stadler Center for Poetry in Lewisburg. Her poetry collection Less Obvious Gods was published in 2013, and she is the recipient of numerous awards, including the 2011 Ingrid Reti Literary Grant, National Endowment for the Arts Poetry Writing Fellowship (1997), and Pew Charitable Trusts Fellowship (1993). At the time of this writing, Coffman resides in Atascadero, California, where she teaches at California State Polytechnic University in San Luis Obispo.

Lisa Coffman spent the early years of her life in East Tennessee. She received her undergraduate degree in English and Computer Science from the University of Tennessee in 1985. Coffman then won a Rotary International Fellowship and used it to study at the University of Bonn in Germany. After one year of study, Coffman returned to the United States and received her Master's degree in Creative Writing from New York University in 1985.

Coffman began writing in 1985 at the age of 21 and quickly began devoting her life to poetry. In the early 1990s, Coffman's poems were published in such journals as The Beloit Poetry Journal, The Southern Review, Painted Bride Quarterly, The Drunken Boat, and The Cincinnati Review. Coffman spent much of the '90s in her native Tennessee where she found poetic inspiration. In an attempt to absorb the family history, regional color, and the ephemera of the regional dialect, Coffman lived in a cabin on Tennessee's Cumberland Plateau for six months. Her poetry was molded by this experience with southern scenes often reflected in her writing. For example, On a Mill Worker in Rockwood, which bears special significance to Coffman's experience in early childhood in a mill and is typical of Coffman's unrhymed style:

He'd come home and put his face in his hands,
whiskey and chair by the kitchen door,
while your Mamaw fixed supper he never ate
and small at the table, you watched his bent back.

Coffman began gaining recognition on a national level when she reached the semifinals in the Discovery/The Nation poetry contest sponsored by The Poetry Center of the 92nd Street Y and The Nation magazine. In 1993, Coffman won a Pew Fellowship in the Arts for her poetry, as well as a fellowship from the Pennsylvania Council on the Arts. In 1996, Coffman won the esteemed Tom and Stan Wick Poetry Prize from Kent State University. For winning the prize, The Kent State University Press published her first poetry volume, Likely: Poems.

Her poem "Courage, Or One of Gene Horner's Fiddles," from Likely, was selected for publication by the Public Poetry Project of the Pennsylvania Center for the Book in 2002.

Though Coffman's experiences in Tennessee are often the subject of her poems, she also has a significant tie to Pennsylvania, where she spent considerable time in the 1990s. Coffman made frequent contributions to Philadelphia's City Paper. She also served as a Professor of English at the Pennsylvania State University—Altoona. From State College, she moved to Lewisburg and Bucknell University's Stadler Center for Poetry where she held the position of Poet in Residence for one year.

In addition, she also received an Ingrid Reti Literary Grain in 2011 for her nonfiction manuscript in progress, "No Business, Tennessee."

Coffman has traveled throughout the United States as a professor and judge in poetry contests. She held brief stints teaching at such schools as Deep Springs College in California and the California Polytechnic State University. At the time of this writing, she continues to teach at the California State Polytechnic University in San Luis Obispo and lives in nearby Los Osos with her husband Joe and daughter Jenna.