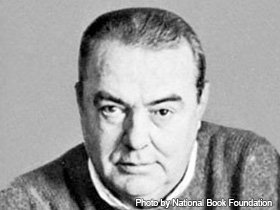 James Gould Cozzens won the 1949 Pulitzer Prize for his novel Guard of Honor.

James Gould Cozzens was born on August 19, 1903, in Chicago, Illinois. He attended Kent Prep School and later Harvard University in 1922. He married Sylvia Bernice Baumgarten in 1927. Cozzens won the 1949 Pulitzer Prize for Guard of Honor (1948) and was a prolific writer, penning The Just and Unjust (1942), By Loved Possessed (1956), and others. He conducted much of his research in the Doylestown Courtroom in Bucks County, Pennsylvania for The Just and the Unjust. He served as an Air Force Officer during World War II. Cozzens suffered depression later in life and died on June 22, 1978, from pneumonia in Stuart, Florida.

James Gould Cozzens was born on August 19, 1903, in Chicago, Illinois, to Henry William, a Campbell Press Company employee, and Bertha Wood Cozzens. As a child, he lived in West New Brighton, Staten Island. He was first published at the Staten Island Quill at the age of 12. Cozzens attended the Kent High-Episcopal Preparatory School in Connecticut, where he was a lively and often rebellious child, according to Matthew Broccoli, Cozzens's friend and biographer. He attended Harvard University in 1922; although he did not graduate, Cozzens was awarded an Honorary Doctor of Letters Degree in 1952. At age 24, Cozzens married Sylvia Bernice Baumgarten on December 31, 1927, in a civil ceremony. They met in 1926 while she was working for Brandt & Kirkpatrick, a publishing company. They were married for 36 years and did not have any children.

Cozzens wrote his first novel Confusion in 1924 when he was only a sophomore at Harvard. The piece followed the life of a French aristocratic woman as she attended school in Europe. Cozzens himself felt Confusion was mediocre. Reviewers agreed, citing his youth as his main fault. Shortly before publishing his second novel, Cozzens took a leave of absence from Harvard after he was placed on academic probation. He never returned to Harvard. His second work Michael Scarlett (1927) is set in the sixteenth century and chronicles the life of the future Earl of Dunbury. Although well-written, it failed to capture the attention of the masses and critics.

In 1925, Cozzens worked in Tuinucu, Cuba, as a private tutor. After returning to the United States and marrying Sylvia Bernice Baumgarten in 1927, he drew on his experiences in Cuba to create his next two novels Cock Pit and The Son of Perdition, published in 1928 and 1929 respectively. Although the novels were received quite well, Cozzens was not content, according to John Fischer in James Gould Cozzens: True Acquist of True Experience. He states Cozzens currently does not acknowledge his first four novels as his literary works.

In 1931, Cozzens earned critical and public acclaim with S.S. San Pedro, a novel based on the S.S. Vestris' sinking on November 12, 1928. His thoroughness in his research and prose led many to believe he was once a sailor. In his biography of Cozzens, Bruccoli states that critics reacted favorably. He cites the review of William McFee of the Saturday Review of Literature, who stated Cozzens's work "is probably as near genius as a writer in our time can attain." Another short piece Cozzens wrote during this time was "Farewell to Cuba," which earned him the O. Henry Award in 1931.

In 1933, the Cozzens family moved to Lambertville in Bucks County, Pennsylvania, where they lived at Carr's Farm on Goat Hill Road until 1958. There Cozzens wrote many of his novels. In 1934, Cozzens penned Castaway, a dark, psychological piece that addresses the effects of poverty on mental stability. The main character, Mr. Lecky, is driven to madness and murder. The piece is entirely symbolic as the events are written to take place entirely in Mr. Lecky's mind over the course of a few seconds. Reviews of this piece were mixed. Some critics were in awe of his writing abilities and originality. Others appreciated the ingenuity without truly understanding the plot. Still others criticized Cozzens. Bruccoli writes that Cozzens simply felt he was too intelligent for his critics.

The Just and Unjust was published in 1942 and is set in eastern Pennsylvania in 1939. Two of four men involved in the kidnapping and murder of a narcotics dealer are on trial, but none of them is responsible for the physical killing of the drug dealer. The novel addresses the Pennsylvania felony-murder rule in which an individual could be convicted of first-degree murder and executed even if the accused person did not physically kill the victim. It was a dramatic look at America's legal system during this time. The novel is based on the case of the Commonwealth vs. Martin Farrell and Francis Wiley (1935) in Pennsylvania. Cozzens's meticulous attention to detail in the novel accurately depicts the monotony of the courtroom and complexity of law. He conducted his research in the Doylestown Courthouse in Pennsylvania. It was his best-received novel. It earned critical acclaim from the New York Times, New York Herald-Tribune, Saturday Review of Literature, and American News of Books. However, some critics were not impressed; instead they were bored and discontented with the lack of emotional feeling. Others responded to these critics by stating Cozzens's detachment from his characters is needed to attain the objectivity that is striking in Cozzens's works.

During World War II, Cozzens served as an officer in the Air Force. His diaries of the war have since been published. Aside from his travels, he worked in the Pentagon in what eventually became the Office of Information Services. Around this time, he began to show signs of depression, casually linked to his lack of writing. In 1943, Cozzens was inducted into the National Institute of Arts and Letters.

In 1948, with the publication of Guard of Honor, originally titled "The Tempest," critics recognized Cozzens's mastery of prose. It is set during World War II over the course of three days in September 1943. Cozzens traces his characters, members of the Army Air Forces Operations and Requirements Analysis Division, as they struggle with the political, personal, and social implications they experience during the integration of the military. This novel won critical acclaim for Cozzens. His piece was awarded the 1949 Pulitzer Prize. However, the book did not sell well partly due to the popularity of other World War II novels, such as Normal Mailer's The Naked and the Dead.

Cozzens's By Love Possessed (1957) was set in small Pennsylvanian town during the 1950s and explores all the varieties of love and relations existing via the main character Arthur Winner. By Love Possessed was Cozzens's bestselling novel. Bruccoli suggests that publicity arising after the publication of this novel did not enhance Cozzens's image positively. He was viewed as pretentious and often intolerant because of negative interviews and derogatory comments. Bruccoli also states that reviews from critics were severely mixed. Common criticisms centered on the emotional distance from his readers. Despite a rather harsh Time Magazine critique, the magazine recognized the novel's literary significance by stating, "None of these shortcomings will keep By Love Possessed from becoming the best American novel of the year, or alter that fact that it is well worth reading." In 1960, Cozzens received the William Dean Howells Medal for By Love Possessed. In 1961, By Love Possessed was eventually adapted into a feature film starring Lana Turner.

Later in his life, Cozzens reverted to a reclusive lifestyle. He refrained from close friendships and valued the anonymity he experienced while living in Williamstown, Vermont, at his home "Shadowbrook." His personal notebooks tell a story of a man suffering from an intense fight with depression. He and his wife eventually moved to Florida where the two lived for the remainder of their lives.

Sylvia Bernice Cozzens died on January 30, 1978. At the time Cozzens was working on the introduction to the book Just Representations. Shortly after undergoing surgery to remove two neoplastic lymph nodes that same year, Cozzens struggled with the idea of suicide. James Gould Cozzens died on June 22, 1978, in Martin Memorial Hospital in Stuart, Florida, of pneumonia. Just Representations (1978) was published shortly after his death. It sold moderately well and received tepid reviews.