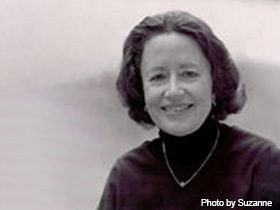 Jane Louise Curry is an award-winning author of juvenile-fantasy and mystery novels. Among her works is The Egyptian Box, published in 2002.

Children's author Jane Louise Curry was born in 1932 in Ohio. She received much of her early training in Pennsylvania, attending Penn State and Indiana University of Pennsylvania. She later moved to California where she began a prolific writing career, dealing with folklore and legend, mystery, and historical fiction. She currently divides her time between California and Great Britain.

Jane Louise Curry was born in East Liverpool, Ohio, on September 24, 1932. She is the daughter of William Jack Curry, Jr. and Helen Margaret Curry. Curry grew up in Pennsylvania (Kittanning and Johnstown), but upon her graduation from college she moved to Los Angeles, California, and London, England.

Curry attended Pennsylvania State University in 1950, and she studied there until 1951 when she left for Indiana State College (now known as Indiana University of Pennsylvania). In 1954, after graduation, Curry moved to California and worked as both an art teacher for the Los Angeles Public School District and a freelance artist. In 1957, Curry entered the University of California in Los Angeles (UCLA) in order to study English literature, but in 1959 she left Los Angeles and became a teaching assistant at Stanford University. Curry was awarded the Fulbright grant in 1961 and the Stanford-Leverhulme fellowship in 1965, allowing her to pursue her graduate studies at the University of London. She earned her MAin 1962 and her PhDin medieval English literature from Stanford University in 1969. From 1967-1968 and, again, from 1983-1984, Curry was an instructor of English literature at the college level. She became a lecturer in 1987. Besides her writings, Curry's artworks are also considered among her achievements. She has had several paintings exhibited in London, and her works have even earned her a spot in the prestigious Royal Society of British Artists group exhibition. Among the many groups that Curry belongs to are the International Arthurian Society, the Authors Guild, the Children's Literature Association, and the Society of Children's Book Writers.

Curry illustrated and published her first book Down from the Lonely Mountain in 1965. This juvenile fiction based on Californian Native American folklore has paved the way for Curry's expansive literary career. She has penned more than 30 novels, which are mostly based on child characters dealing with a wide variety of subjects. Many of Curry's writings deal with folklore, such as the Native American folklore that she explores in her novels Turtle Island: Tales of Algonquian Nations (1999)and The Wonderful Sky Boat: And Other Native American Tales of the Southeast (2001), and the retellings of famous European folk stories, such as Robin Hood and his Merry Men (1994), Robin Hood in the Greenwood (1995), and The Christmas Knight (1993). Yet she also delves into the genres of fantasy, such as in her novels Parsley, Sage, Rosemary, and Time (1975) and Me, Myself, and I (1987); historical fiction, such as in her novels What the Dickens (1991) and Stolen Life (1999); and mystery, such as in her novels The Bassumtyte Treasure(1978) and Moon Window (1996).

At the time of this writing, Curry resides in Palo Alto, California, and London, England.