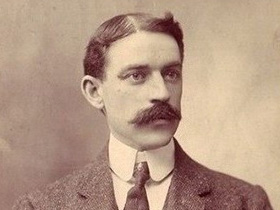 Columnist and poet Thomas Daly was born in Philadelphia.

Born in 1871, Thomas Augustine Daly was known as a humorist, poet, and journalist. Some of his most popular poems include titles such as "Between Two Loves" (1909), "Mia Carlotta" (1909),"Da Comica Man" (1906), and "Da Leetla Boy" (1909). He also created famous books of poems, such as Canzoni (1906) and Songs of Wedlock (1916). Daly spent most of his life as a newspaper column/editorial writer. He started off as a young reporter and developed into a successful poet and writer. Daly died in his native Philadelphia in 1948.

Thomas Augustine Daly was born on May 28, 1871, in Philadelphia and was raised by parents John Anthony and Anne Victoria Duckett Daly. His parents raised him in a religiously Catholic environment. They sent him to both public schools and Catholic boarding schools throughout his childhood. Young Daly was only 14 when he started attending the Villanova College in the year 1885. He soon transferred to Fordham University, where he made it to the end of his sophomore year. At that point, Daly dropped out of college. Patricia Owens Williams wrote in the Dictionary of Literary Biography that Daly jokingly claimed that he "tried to major in baseball and cigarette smoking."

During the younger years of his adult life, Daly worked as a cashier at a grocery store. This, ironically, may have been one of the most important jobs in his writing career because it is where Daly picked up on the Italian-American dialect that would feature so prominently in his work. Immigrants often came through the store and he studied their accents closely. After college, in the year 1896, Daly married Ann Barrett with whom he had seven children.

Daly's main career started as a reporter for the Philadelphia Record in 1891. Here, he eventually worked his way up to become an editorial writer. In 1898, Daly became the general manager for the Catholic Standard Times in Philadelphia. Daly was very famous as a humorist writer. The type of humor that he used at the time was short-lived, like most other things in history that have been found to be humorous, but was very popular throughout his life. He was able to incorporate a great sense of humor with the main use of Irish-American or Italian-American accents in his work, as shown in his poem "Between Two Loves" in which he writes:

The dialect writing appears in all sorts of Daly's poetry and people loved it. Williams described how Daly was "generally praised during most of his lifetime" and how his work was thought of
as "comic and clever." She then explained how Daly "was commanded to 'tell a joke, sing a song or act'" at the 1904 St. Louis American Press Humorists convention and responded by delivering "a heavily accented anecdote to the delight of his audience." She goes on to say that he was given credit for building the Catholic Standard up to be "the most successful Catholic weekly newspaper in the United States."

Daly's verse relies on the reader "hearing" the sound of various dialects as represented typographically on the page. This technique was widely used in the 19th and early 20th centuries. Mark Twain employed it in most of his novels, as did Joel Chandler Harris in his "Uncle Remus" stories. As the culture of reading literature aloud waned, dialect writing's popularity faded. One holdover of this technique is the dropping of "g's" at the ends of words (e.g. "feelin'" in many song lyrics).

In 1906, Julian Hawthorne, a former journalist for Cosmopolitan magazine and the New York Journal, said that Daly's book of poems Canzoni was "a masterpiece." I.C. Keller of the California State Teachers' College (now California University of Pennsylvania) wrote in Pennsylvania History that Daly "is a born poet of the lowly, having captured the spirit of little Italy." Daly was even chosen to perform as a humorist "and help build Nye's monument," as an article in the 1907 Los Angeles Herald put it. Bill Nye was also a humorist and known for founding the Laramie (WY) Boomerang daily newspaper. He was devoted a "night of solid laughter" by the press humorists.

A reporter for the Chicago Daily Tribune wrote about Daly's book Carmina and stated that his dialect was able to "portray the characteristic humor and good nature of the Irish." This article was printed in 1909, shortly after Carmina made its appearance.

Daly's book Songs of Wedlock, published in 1916, demonstrated his joyful family life. A reviewer for the New York Times stated that "he busily lavishes charming words of praise on everything," including his "devoted wife ever present in his thoughts." The same article goes on to explain that he includes "a craftsmanship" and a "genuine depth of feeling" in his work.

Daly's use of foreign dialect can also be shown in a poem written in his book McAroni Ballads (1919) titled, "Da Fine Italian Hand": "You see, eet ees verra good theeng for dees Joe/He com' to dees countra so long time ago." A New York Times critic stated that Daly "uses dialect more skillfully than any other American poet" after he concluded that McAroni Ballads "will win new laurels" for him. Another reporter for the New York Times said that McAroni Ballads was "flippantly humorous," with "the best" of the poems being "those in Italian dialect."

Daly's success could further be explained by a reporter who wrote an article in the Trenton Evening Times that stated most "poets who have no other source of income" have a "lean and hungry look." He went on to say that Daly "does not have the appearance of one who is suffering from under-nutrition" and "ranks among the most prosperous modern American bards."

For his work as a writer, Daly was given several honorary degrees by several different universities. His first honorary degree was an MA from Fordham University in 1901. He then went on to receive a Doctor of Letters (LittD or LTD) degree in 1910 from Fordham. Later on in life, he received two more honorary LittDdegrees: one from the University of Notre Dame in 1917 and another from Boston College in 1921. W.R. Rose of the Cleveland Plain Dealer explained that "newspaper men achieve these honors now and then, but not often."

Daly died at the age of 77 on October 4, 1948, from a stroke. He was buried at the Old Cathedral Cemetery in West Philadelphia. His legacy didn't necessarily live on to make him still be well known as "great." Gaetano Cipolla of St. John's University stated that Louis Untermeyer, a famous American poet, regarded Daly's poetry as some of "the best dialect rhyming of the period." Cipolla went on to say that although Daly's work was "regarded with mixed feelings," he "cannot be considered a major literary figure in the United States." He instead considered Daly's work as "an important historical document."