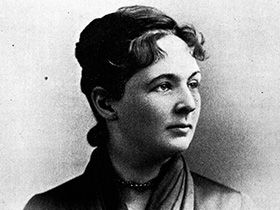 Novelist and short story writer Margaret Deland was born in Maple Grove (now part of the North Side).

A controversial writer, Margaret Deland, was born in Allegheny City in 1857. After losing both of her parents as an infant, Deland found herself growing up in the arms of her mother's sister. She was a novelist, short story writer, and a poet, and she was heavily involved with the community, taking on the task of temporarily supporting the growth of unwed mothers. Her literary contributions questioned the requirements for happiness and how it can be fulfilled.

Daughter of Sample Campbell and Margaretta Wade, clothing merchants, Margaret Deland was born on February 23, 1857, in Allegheny, Pennsylvania, now known as the north side of Pittsburgh. Losing her mother upon childbirth and her father two weeks later, Deland's upbringing was solely reliant on that of her mother's sister, Lois Wade. She grew up in Manchester and at the ripe age of twelve she found a passionate love for writing. She married Lorin F. Deland in 1880, and the couple moved to Boston where they found themselves situated for the better part of their life.

Concerned about social and cultural issues affecting women, Deland opened her home to some 60 unwed mothers and their infants during a four year span. During this time she began writing verses for a greeting-card firm and eventually saw a few of her poems published in Harper's Magazine. A collection of these poems was compiled, and in 1886, Deland's first book, The Old Garden (1886), was published. In the years following, Deland wrote prolifically, publishing novels, short stories, and poems. Most of her short stories would be set in "Old Chester," a town based on the Manchester of her youth. As a novelist and short story writer she was known to write about controversial issues that questioned moral conventional responses. Her first novel, John Ward, Preacher (1888), was a portrayal of the destructive conflict between a Calvinist minister and his Episcopalian wife, who could not accept the doctrine of eternal damnation. The book sparked controversy and led to surging sales.

Deland continued to write and publish popular short stories such as Old Chester Tales (1899), a collection of realistic stories based loosely on her childhood. She went on to write for many years after, however, none of her newer works lived up to the expectations of her originals. In 1926, Deland was elected to the National Institute of Arts and Letters and was granted the Legion of Honor by the French government for her relief efforts in France during World War I.

At the age of 87, Deland died on January 13, 1945, at the Hotel Sheraton in Boston, Massachusetts, from natural causes. Through some of her controversial writing, Deland brought into question the norms of society and made others realize the defining goal of happiness.