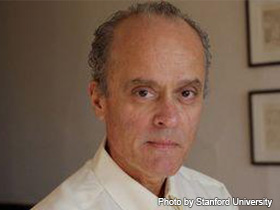 Deemed a "thinking poet" in an essay by Charles Wasserburg, W. S. Di Piero credits his self-fed appetite for literature, art, and philosophy for influencing his career as a writer. He was born in 1945, and his time spent reading and developing an appreciation for art at an early age led to his publication of several translated works, essay collections, and over ten books of poetry, including Chinese Apples: New and Selected Poems (2007), Nitro Nights (2011), and Tombo (2014). In 2012, Di Piero was awarded the highly prestigious Ruth Lilly Poetry Prize and is the recipient of countless honors. He contributes art criticism on a regular basis to the San Diego Reader, and his poems appear often in journals such as Threepenny Review and Poetry. In 2014, his poem "Johnny One Note," from Nitro Nights was selected for publication by the Public Poetry Project of the Pennsylvania Center for the Book. At the time of this writing, Di Piero lives in San Francisco, where he is a Professor Emeritus of English at Stanford University.

Deemed a "thinking poet" in an essay by Charles Wasserburg that appeared in Sewanee Review (1991), W. S. Di Piero credits his literary predecessors as well as visual artists and philosophers for influencing his thought process as a writer. Born in 1945 in an Italian neighborhood of South Philadelphia, Di Piero spent a lot of time at his "second home" from an early age, he told John Rodden in an interview for the book Performing the Literary Interview. This second home was the public library just a mile and half from where he lived, and he took advantage of its resources, he said: "...to chart my own way out of my south Philly neighborhood."

He became enthralled with visual artists, e.g. Alberto Giacometti, Constantin Br?õncu??i, and Paul Klee, and began reading about them in depth and visiting The Philadelphia Museum of Art to educate himself. In 1968, he earned a BA from St. Joseph's College and prepared to leave his hometown. "I wanted to leave south Philly and felt I had to go," he told Rodden. "I had to escape. Every artist has some sense of a provincialism he or she must escape."

Di Piero headed west and earned an MA in English from San Francisco State University in 1971. He resolved to make writing a priority over teaching and traveled to Italy on a Fulbright Fellowship (1972). There he "began to translate Italian poetry and to immerse himself in Italian art," wrote Rodden. His translated work, Pensieri (1981), was nominated for the American Book Award in Translation (1982), and Di Piero also published The Ellipse: Selected Poems of Leonardo Sinisgalli and This Strange Joy: Selected Poems of Sandro Penna in 1982.

This Strange Joy later won Di Piero the first Academy of American Poets' Raiziss/de Palchi Book Prize in 1996. Soon after, he published Euripedes' Ion (1996), a translated work providing a modern-day read of the Greek tragedy while honoring the original via in-depth commentary, annotation, and a full glossary.

"He is the most intense, intellectually passionate writer whom I have ever interviewed," Rodden said. "Di Piero raises the interview to the level of a philosophical essay, revealing a depth of engagement and intimacy with thinkers such as Nietzsche, Wittgenstein, and Hannah Arendt."

In tandem with his translations, Di Piero remained hard at work on poetry and essays. "Di Piero has produced a diverse body of [poetry collections] that's alternately lush and spare, ranging from raucous character studies drawn from his South Philadelphia youth to somber meditations inspired by the landscapes of his adopted California," said Booklist's Kevin Nance. The Ingram-Merrill Award for Poetry (1985) was awarded to Di Piero for his early collections: Country of Survivors: Poems (1974), Solstice (1982), The First Hour (1982), The Only Dangerous Thing (1984), and Early Light (1985).

Early Light won the Commonwealth Club of California Silver Medal in its publication year, and Di Piero was awarded the prestigious Ruth Lilly Poetry Prize in 2012, an award that "honors a living US poet whose lifetime accomplishments warrant extraordinary recognition," according to the Poetry Foundation and founder of the Prize. "They called me on April Fool's Day," Di Piero told Cynthia Haven's Blog for the Written Word. "So I had to ask twice if they were serious." The Foundation describes the prize as "one of the most prestigious awards given to American poets and is one of the largest literary honors for work in the English language."

Other poetry collections by Di Piero include: Skirts and Slacks (2001), Brother Fire (2004), Chinese Apples: New and Selected Poems (2007), and Nitro Nights (2011), which Copper Canyon Press describes as "a chronicle of daily existence lived at the nerve ends." Of his collection, Tombo (2014), editors at McSweeney's Books say, "No one sounds like W.S. Di Piero. Explosive language, rough sensuousness, unflinching eye—here is a poet who will not look away, and who is always committed to poetry's first purpose: to bring song. Tombo is a book of lyrics fueled in equal parts by realism and big-fish storytelling, a book of wanderers, foghorns, summer rain, feral cats, and city jazz. Built on heartbreak particulars, these poems are raw, mysterious dilations of the moments of existence... "

In the mid-80s, Di Piero began writing about paintings and has written several essay collections, including Shooting the Works: On Poetry and Pictures (1996), Out of Eden: Essays on Modern Art (1991), and Memory and Enthusiasm: Essays, 1975-1985 (1989). Today he contributes critical art reviews to the San Diego Reader on a regular basis, and his poems often appear in Poetry and Threepenny Review. His work has also appeared in The New Yorker, New England Review, American Poetry Review, The New York Times Book Review, and elsewhere. In an interdisciplinary work, Living Under South Street (2003), coauthored with Jonathan Elderfield and Murray Dubin, Di Piero's poems accompany black & white photographs of South Philadelphia streets to represent the area's varied lifestyles.

Di Piero is the recipient of many honors and awards including, but not limited to, election into the American Academy of Arts and Sciences (2001), a Berlin Prize Fellowship (2002), a Guggenheim Fellowship (1985), a grant from the Lila Wallace-Reader's Digest Writer's Award (1990), a National Endowment for the Arts Fellowship (1989), and the 2007 California Book Award in Poetry for Chinese Apples.

At the the time of this writing, W. S. Di Piero lives in San Francisco and writes a regular column on visual art exhibitions in San Diego and Los Angeles for an independent newsweekly and catalog essays for art galleries and museums. He has taught at Louisiana State University (1979-1980), Northwestern University (1980-1982), and is a Professor Emeritus of English at Stanford University, where he began teaching in 1982. He has also been a Visiting Writer at the Vermont Studio Center.

In 2014, Di Piero's poem, "Johnny One Note," from Nitro Nights (2011) was selected for publication by the Public Poetry Project of the Pennsylvania Center for the Book.

"[He] writes so beautifully," says Stephen Elliott, author of Happy Baby. "[S]o evocatively that I lose hours happily in his work. [His] poems will wash you out to sea and you won't even notice until you lie back on your raft and take a long, hard look at the sun."