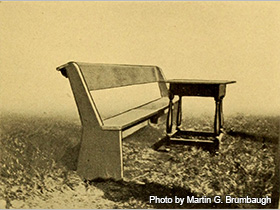 Christopher Dock brought blackboards into the classroom and was known as the Father of American Pedagogy.

"The Father of American Pedagogy," Christopher Dock, was born in Germany in the 1690s. He eventually emigrated to the British North American colony of Pennsylvania. While there, he converted to the Mennonite faith and would become an educator. One of the most noteworthy innovations Dock brought to the classroom was the blackboard. After a long career as a pioneer teacher, Christopher Dock passed away in 1771.

Creak! Creak! The wheels of the cart groaned and squeaked as the wagon carried little Eli Shrawder and his family over the road through Philadelphia and the German Town to settle in a new home in Penn's Woods. The Shrawders had come from across the sea to make a new home in the Mennonite settlement on the Skippack. The first days there, with the neighbors gathered to help build their house, were exciting for Eli. And like most real boys he preferred to chase squirrels, go fishing, or work on the wooden bench he was carving for Mom than go to school. But with such a schoolmaster as Christopher Dock, he soon found himself wanting to learn his letters. How Eli planned a surprise for his schoolmates and won a prize from his schoolmaster is a story full of the fun, mischief and work of school days of any time. Around the real character of Christopher Dock, who has come down from the 1700s in the history of Skippack and Germantown as a beloved schoolmaster...

Thus, Marguerite de Angeli introduces her children's book called Skippack School. The whole book is based on the wonderful things Christopher Dock brought to the Skippack area. Christopher Dock was a man of many trades. He was a farmer, hymn writer, poet, penman, inventor of the blackboard, most of all; he was a teacher of children. He played a vital role in the growth of the Skippack area of Montgomery County.

Born in Germany in the late 1690s, Christopher Dock immigrated to America in 1714 and arrived in Skippack about 1717. Once in Pennsylvania he grew to love the Mennonites and their religious beliefs. He then adopted their way of living and became a true believer and follower.

Although Dock was a follower in his religious beliefs, he was a pioneer in many other aspects of his life. For example, in 1718 shortly after he arrived in Pennsylvania Dock opened a school among the Mennonite on the Skippack. In 1897, historian F. A. Joseph wrote that Dock is often called the 'Father of American Pedagogy.' He was the first individual to bring the idea of studying how to become an efficient teacher. For example, Dock worked on getting his students to behave; therefore, if his students were disciplined and attentive then they would retain more information, but in a unique and non-traditional way. Christopher Dock believed teaching was a lifework instead of a sporadic occupation an individual picking up as a side job.

Another feature Dock brought to the education system was the first book published in America on teaching. This book was called School Management. Dock wrote this book partially to praise God but also to teach other teachers, how the youth should be brought up in society and in the schools. Another book called A Hundred Rules of Conduct for Children was published to let parents, teachers, and other individuals learn how children should conduct themselves in certain situations. Dock stressed disciplining his students firmly but with a warm heart. For example, he would be firm with the children so they would be obedient but warm so they would trust and respect him with the material being taught.

Christopher Dock took time off from educating youth to farm for about 10 years. During those years, Dock knew he was destined to teacher and couldn't bear to stay away any longer, so he gave up farming and returned to the classroom. The famous colonial schoolmaster taught for a total of 40 years in Pennsylvania.

He opened up two schools in his lifetime, one in Skippack and one in Salford near Philadelphia. Dock would teach three days a week at each school alternating between them devoting his time to the children. "One day in 1771, after teaching a class, Christopher Dock passed away. He was in the schoolhouse, found on his knees in a position of prayer with his roll book open before him."

'The wonderful old Pennsylvania Dutchman Christopher Dock,' brought many important things to Pennsylvania as well as to America. When Dock first came to Pennsylvania there were no public schools, nor did there appear to be a demand for them. Most parents were content with their children growing up on the farm and only learning the essentials to get by. For example the ladies would only learn how to maintain the household, while the men only learned how to provide and protect for the property. This put the responsibilities solely on the parents and the church, which was not motivating the children to learn.

Dock taught at a private school for a few years where the education was paid by the parents. Here is where he started to gain insight into how education should be conducted. From then on he decided to open up his own schools and teach. He believed children should not be denied education because of their families' wealth. Therefore, he opened up one of the first public schools. Children who were taught by Christopher Dock were privileged because his methods of teaching and discipline were far ahead his time.

Christopher Dock was a very well-rounded individual with a big heart. "He was very modest, not wanting attention or special treatment above others. 'He would not permit his friend and publisher, Christopher Saur of Germantown, to publish his works while he was alive.' He did not want disrepute to come from such a publication."

Dock did many great things for this country and shaped the way our schools are run today. He brought so many wonderful characteristics to Pennsylvania and had such a big influence on his community. He pioneered in educating children, publishing books, and the use of the blackboard.

Photo Credit: "Black and white photograph of a school bench and desk used by Christopher Dock in his school in Germantown, Pennsylvania." Photograph. Licensed under Public Domain. Cropped to 4x3. Source: Wikimedia. Martin G. Brumbaugh, The Life and Works of Christopher Dock, 1908, between pp. 14 and 15.