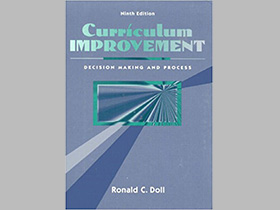 Mehoopany native, Doll joined his wish for a career in journalism with his love of teaching in books, such as Curriculum Improvement: Decision Making and Process (1964).

Educator Ronald Doll was born in Wyoming County in 1913. Educated at Columbia University, Doll taught and served as a counselor and an administrator in a number of public schools. He eventually began teaching in the education departments of New York City area universities. Doll wrote several texts on curriculum development and school administration. Doll died in 1998.

Ronald C. Doll was born in Mehoopany, Pennsylvania, on March 14, 1913. He was the son of H. Stanley Doll (a salesman) and his wife Florence Carpenter Doll. Doll matriculated at Columbia University, earning his BA in 1934, his MA in 1935, and his Ed.D in 1951. He taught, counseled, and served as an acting principal in schools in Dallas, PA, and Cranford, NJ, from 1935 to 1943. During that time he met Ruth E. Paul, whom he married on June 16, 1940; the couple had one daughter, Cheryl. He also served as the Director of Guidance for the West Orange, NJ, public schools from 1944 to 1952, and moved to the Montclair schools until 1957.

Following his stint at Montclair, Doll held a series of posts in the education departments of universities in the New York City area. These included New York University, City University of New York, the College of Staten Island, and Georgian Court College. During his time in the university environment, Doll wrote and co-wrote a number of texts on curriculum development and school administration. He also edited numerous publications for professional organizations in education, including the yearbooks for the Association for Supervision of Curriculum Development (ASCD). He told Contemporary Authors Online the following about his education writing: "I've spent happy days in teaching and administration, but even happier ones in describing what teachers and administrators can do to make youngsters' learning easier and more productive."