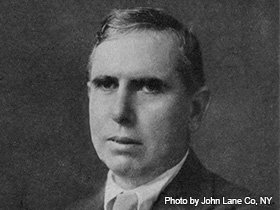 One of the most important literary figures of the first decade of the twentieth century, Theodore Dreiser, was born in 1871. Much of his career was spent in journalism, including a period working for the Pittsburgh Dispatch. He would become best known for his massive novels, including An American Tragedy (1925),Jennie Gerhardt (1911), and Sister Carrie (1900). Dreiser died in 1945.

Theodore Dreiser was born in Terre Haute, Indiana on August 27, 1871. His parents were John Paul Dreiser, a German immigrant who was a weaver by trade, and Sarah Schaenaeb Dreiser, a farmer's daughter from Dayton, Ohio. The ninth of ten surviving children, Dreiser grew up in an impoverished household in Terre Haute, but lived most of his adult life in New York City. On December 28, 1898, Dreiser married Sara Osborne White; the couple divorced in 1910. Dreiser was remarried to Helen Patges Richardson on June 13, 1944.

From 1889-1890, Dreiser was a student at Indiana University; his tuition paid for by his former teacher, Mildred Fielding. Dreiser dropped out of school because he felt like a social outcast and was not stimulated by his coursework. He returned home where he drifted from one job to another. In 1892, he became a reporter for the Chicago Globe, where he worked as an investigative journalist. The following year, Dreiser worked for the Globe-Democrat and Republic, both in St. Louis, Missouri. It was at the Republic in 1893 that Dreiser was to escort 20 female teachers from St. Louis to the Chicago World's Fair and write about their activities on the journey. One of these women was Sara Osborne White, who was 24 at the time—two years older than Dreiser. The two married in 1898. Dreiser worked as a reporter for the Dispatch in Pittsburgh from 1892 to 1893. When Dreiser was in Pittsburgh, he did research on labor disputes that had culminated in the Great Strike of 1892 at Homestead. In 1899, he also wrote The Carnegie Works at Pittsburgh, which was privately published in 1929.

Dreiser was a naturalistic author who was instrumental in promoting a realistic portrayal of life in America, and he was not afraid to write about sexual matters and social injustice. Two of his most well-known novels, Sister Carrie(1900) and An American Tragedy (1925), depicted characters who were motivated by their selfish impulses, not by their sense of ethics. These novels were met with much controversy by his conservative contemporaries. The first edition of Sister Carrie, which came out in 1900, sold only 500 copies, causing Dreiser to sink into a deep depression. Upon its reprint in 1907, Dreiser experienced better results, which encouraged him to complete his second novel, Jennie Gerhardt (1911), a considerable commercial success. Dreiser didn't live to see the successful 1951 adaptation ofhis An American Tragedy turn into the film A Place in the Sun. Dreiser also wrote a number of novels, plays, short stories, poetry, and his autobiography, Dawn (1931).

In 1930, Dreiser was a finalist for the Nobel Prize in Literature and also won the Award of Merit from the American Academy of Arts and Letters in 1945. He is regarded as a very important writer in the American literary canon, bridging the gaps between Realism and Naturalism. Dreiser died of a heart attack on December 28, 1945, in Los Angeles, though some sources say he died in Hollywood.