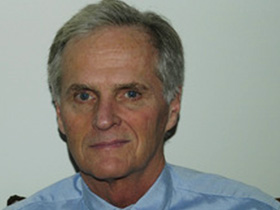 William Ecenbarger won a Pulitzer Prize for his coverage of the Three Mile Island accident.

William Ecenbarger is a former reporter and editor for the Philadelphia Inquirer. In 1980, he received the Pulitzer Prize for General News Reporting for his coverage of the Three Mile Island nuclear accident. As a freelance writer, his worked has been published in magazines and newspapers around the country. Ecenbarger has written historical books, including: Walkin' the Line:A Journey from Past to Present Along the Mason-Dixon, published in 2000, and Glory by the Wayside: The Old Churches of Hawaii, co-authored by his wife, Susan, and released in March 2008. He is a graduate of Susquehanna University in Selinsgrove, Pennsylvania, and was a long-time resident of Lancaster, Pennsylvania. At the time of this writing, he lives in Hershey, Pennsylvania.

Born in 1940, William Ecenbarger had the childhood of an average American boy growing up in the 1950s. He was fascinated by geography and eagerly anticipated family vacations, which gave him the opportunity to study new maps. Ecenbarger also caught the 'journalism bug' early. As a young teenager, he would take the train into New York City to watch the Yankee games, and after he came home, he would write his own news stories, only to compare them to the sports reporters' pieces the next morning.

After graduating from Lindenhurst High School in New York, Ecenbarger attended Susquehanna University in Selinsgrove, Pennsylvania, where he received a degree in English. While he was a student there, he was the editor of the school's weekly newspaper. After graduating in 1961, he immediately began working for United Press International. One of his assignments included covering the 1968 Democratic National Convention in Chicago from the streets. In 1970, Ecenbarger joined the Philadelphia Inquirer staff, as the Harrisburg bureau chief. With that role, Ecenbarger extensively covered Pennsylvania state politics and won the George Polk Award in 1978 along with two other Inquirer reporters for their series exposing corruption in the Pennsylvania state legislature. Two years later in 1980, he was a part of the team that won the Pulitzer Prize for Local General or Spot News Reporting for their coverage of the nuclear accident at Three Mile Island during late March and early April 1979. In the early 1980s, Ecenbarger transitioned into freelance writing, and has since published more than 300 articles. His career, which has an emphasis on travel pieces, has taken him to more than 50 countries in around the world, including trips to nearly every continent. In 1996, he was named "Lowell Thomas Travel Writer of the Year" by the Society of American Travel Writers and has received a number of individual awards from the Society over the years.

Around the turn of the millennium, Ecenbarger combined his love of travel, geography, history and writing to produce Walkin' the Line: A Journey from Past to Present Along the Mason-Dixon, a book that brings the Mason-Dixon Line to life. According to a Susquehanna Todayarticle about Ecenbarger and his work, the book is a "history-travelogue" that "interweaves the story of the line's people, legends, and myths while following the progress of English surveyors Mason and Dixon from 1763 and 1768 as they draw one of the most unusual boundaries on earth." In order to write the book, Ecenbarger spent close to a year walking the Mason-Dixon Line and collecting anecdotes to include with his research. According to the same Susquehanna Todayarticle, his book has received high praises from many reviews. Publishers Weekly's review calls Walkin' the Line a "well-written and dramatic examination of history, geography and race," while the Philadelphia Inquirer said the book is a "tasty feast of heroes and rascals, myths and legends."

In 2008, his second book, Glory by the Wayside: The Old Churches of Hawaii, was released. His wife, Susan, a travel photographer, coauthored the book. The Ecenbargers' interest in Hawaiian churches started on a trip there in 1990 and, before becoming a book, the Hawaiian churches were the subject of numerous articles William wrote. For the book, Susan took all of the photos included, while William did the historical research and wrote the text. According to the Glory by the Waysidewebsite, the book "takes readers on a tour of old Hawai'i—away from the resorts and crowded beaches to the incomparable beauty of its churches and their spectacular settings." The website also says that it is "at once a picture book, an historical perspective and a travel guide that invites readers to further exploration." The book features 37 churches, including churches on Hawaii, Kauai, Lanai, Maui, Molokai and Oahu islands. Since its release, the book has received many positive reviews, several of which compliment the dual functions of the book. According to the Glory by the Waysidewebsite, David Molyneaux, President of the Society of American Travel Writers Foundation, says that it offers "wonderful, heart-warming views of spiritual Hawai'i that many travelers miss. Not only a grand view of Hawai'i's churches, but also a great guide for your next trip around the islands." Furthermore, the website also includes a review by Howard Shapiro, the travel editor at the Philadelphia Inquirer. He describes the book, saying: "Sweeping beaches, imposing mountains and sterling skies—what better setting to find, or at least search for, the Divine? Glory by the Wayside isn't just a beautiful book, it's a useful guide for exploring the old handmade churches that dot the Hawaiian Islands."

His other nonfiction books include: Kids for Cash (2012), Pennsylvania Stories: Well Told (2017); as well as the coauthored works: Catching Lightning in a Bottle: How Merrill Lynch Revolutionized the Financial World (2014) and Making Ideas Matter: My Life as a Policy Entrepreneur (2013).

It is clear that Ecenbarger does what he loves and loves what he does. In Susquehanna Today, hesays, "I've never worked for a living. I've just had fun. If I were independently wealthy, I'd probably do exactly what I'm doing now." William Ecenbarger continues to be a freelance writer and, as of this writing, resides in Hershey, Pennsylvania.