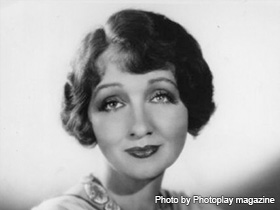 Although an accomplished actress, Hedda is most known for her Hollywood gossip column that was syndicated by the Chicago Tribune.

The legendary gossip columnist Hedda Hopper was born with the not-so-legendary name of Elda Furry in Hollidaysburg in 1890. After running away to New York to make a career in show business, she married DeWolf Hopper. While she had a successful run of silent pictures, her fortunes waned with the advent of talking pictures. She found her calling as a gossip columnist, making and breaking careers in Hollywood during her vaunted feud with Louella Parsons. She died in California in 1966 and was brought home to rest in Altoona.

Elda Furry was born in Hollidaysburg, Pennsylvania, on June 2, 1890. Her parents, strict Quakers, were David E. and Margaret Furry. On May 8, 1912, she married De Wolf Hopper, whom she later divorced. They had a son, William. In 1919, Elda changed her name to Hedda Hopper after consulting a numerologist for advice on selecting a stage name.

After running away from home at the age of 18, Hedda studied music and voice Pittsburgh's Carter Conservatory of Music. Before turning to writing, Hedda was a stage and silent film actress, appearing in numerous films from 1916 until her death in 1966. In addition to her film career, Hedda Hopper was a gossip columnist from 1936 to 1966. Her work appeared in the Chicago Tribune. As a gossip columnist, she used her experience and connections in film to focus on Hollywood stars. She wrote about everything: from people's clothing to their relationships. Hopper was not one to check her sources and information before writing her column. Oftentimes, she would print secondhand gossip in efforts to out-do her archrival Louella Parsons. Hedda also wrote two autobiographies, From Under My Hat (1952) and The Whole Truth and Nothing But (1963), in which she compiled her experiences as a gossip columnist.

Hopper's gossip, though controversial, entertained the public, much as she herself did. Director Cecil B. DeMille said of her, "Humor never deserts her...if there is anything an impish eye can see in the story, Hedda sees it." Oftentimes, Hedda got a tip and printed gossip about pregnancies, marriages, and divorces before the stars released the information.

Hedda Hopper died on February 1, 1966, and is buried in Rose Hill Cemetery in Altoona, Pennsylvania. She is also commemorated with a star on the Hollywood Walk of Fame with a star at 6313 ?? Hollywood Boulevard.