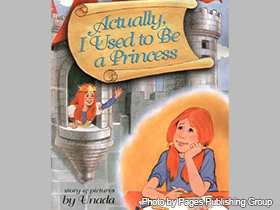 Philadelphia resident, Unada Gliewe has been involved in children's books as an illustrator for the last 30 years. Her works include Actually, I Used to Be a Princess (1993).

Unada Gliewe (pen name, Unada) was born on July 10, 1927, in Rochester, New York. After receiving her BFA from Syracuse University in 1949, Gliewe began her career as a staff artist in an advertising agency where she worked for four years. When Gliewe moved to Philadelphia, Pennsylvania, later in 1954, she became a staff artist for another company where she stayed for many years. Eventually, she moved from her artist career to a freelance career in writing and illustrating children's books. Throughout her life, she has illustrated over 30 different books, four of which she has written. At the time of this writing, Gliewe lives in South Philadelphia, Pennsylvania.

Unada Gliewe, better known as Unada, was quoted by Something About the Author as once saying, "The world is a fascinating place [...] I would hope that my illustrations or writing would 'nudge' at least one child, to help him maintain and increase his own sense of curiosity and involvement in all that is about him." Unada has spent her life illustrating over 30 different children's books, four of which she wrote.

Unada was born on July 10, 1927, in Rochester, New York, to parents Edwin Herman, a carpenter, and Unada Gliewe, who passed her name down to her newborn child. After spending her childhood in Rochester, New York, Unada moved to Syracuse where she attended Syracuse University until 1949 when she earned her BFA.After graduating from Syracuse University, Unada returned home to Rochester, New York, to work at the O'Brien Advertising Agency as a staff artist from 1950-1954. In 1954, Unada left New York for Philadelphia, Pennsylvania, where she worked for the Lutheran Board of Parish Education, also as a staff artist until 1967.

At this point in her life, Unada felt it necessary to break away from her career as a staff artist at a publishing house. The artist wished to pursue her own endeavors and became a freelance writer and artist. In 1967, Unada began illustrating children's books and she has continued illustrating books for most of her life: according to Contemporary Authors, Unada has illustrated books in her freelance state at the J.B. Lippincott & Company, Augsburg Fortress, Judson Press, and Westminster Press publishing houses.

Three years after leaving the security of a career for a life of freelance work, Unada published her first children's book, which she illustrated as well. This book was entitled, Ricky's Boots (1970), and is a story about a boy's journey on a rainy day to buy new boots. The second book that Unada wrote was called Andrew's Amazing Boxes(1971) which is about a young boy's learning experience that even though it is fun to play with boxes alone, it is even more fun to share them with friends.

After writing her first two stories, Unada had a 10-year span where she did not publish another book (although, she did continue to illustrate children's books for other authors); however, in 1981, the author/illustrated published The Marvelous Monster of Mulligan Heights. Unada composedActually, I Used to Be a Princessin 1993. Since this book about a girl who continually compares her current life and experiences to the time when she was "actually a princess" was published, Unada has focused solely on illustrating five other children's books by other authors.

At the time of this writing, Unada Gliewe lives in South Philadelphia, Pennsylvania.