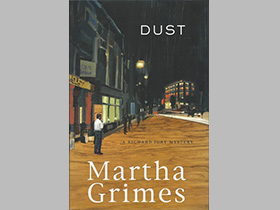 Mystery writer Martha Grimes was born in Pittsburgh in 1931. After earning degrees at the University of Maryland, Grimes began teaching but gave it up in 1970 to write mystery novels. She is well known for her novels featuring English pubs and the Scotland Yard detective Richard Jury and has also written short stories, poetry, and a memoir. In 2011, Martha Grimes was recognized as a Grand Master by the Mystery Writers of America (MWA). She is the author of over 30 books.

Martha Grimes was born in Pittsburgh, Pennsylvania, on May 2, 1931. Her father, D.W., was a city solicitor, and her mother, June, owned a hotel in western Maryland where Martha and her brother spent most of their childhood.

Grimes receives much acclaim for her ability, as an American writer, to capture British life in her novels. Grimes gets her inspiration from British pubs. The titles of her novels are the names of pubs, such as The Man with a Load of Mischief. She now says that she cannot begin a novel until she has found a suitable pub name. Grimes may be best-known for her Richard Jury series, which includes the majority of her novels. They feature a handsome, witty Scotland Yard detective, his aristocratic assistant Melrose Plant, and her obnoxious American Aunt Agatha. When it comes to figuring out "who dunnit," Grimes professes not to know until the end of the novel.

In 1983, Grimes received the Nero Wolfe Award for best mystery of the year for The Anodyne Necklace, which is part of the Richard Jury series. In the early 1990s, the Alfred A. Knopf publishing conglomerate (owners of many publishing imprints) decided to part company with Grimes. She has published with Viking since that time. She records some of the machinations of the publishing industry in her 2003 book, Foul Matter. Though she told New York Times reporter Dinitia Smith that she was not targeting anyone specifically with the book, mystery writer Andrew Vachss called it "all out war."

Her 1999 book, Biting the Moon, dealt with issues of animal abuse and featured two adolescent heroes. Grimes donated two thirds of her royalty profits to various US animal abuse organizations all over the country. On her website, Grimes states: "I do not believe that people are indifferent to animals, possibly, the exact opposite is true - people are so affected by stories, pictures, accounts of animal abuse that they simply do not want to know."

In 2011, Grimes was chosen as the Grand Master by Mystery Writers of America (MWA). This award honors "the pinnacle of achievement in mystery writing and was established to acknowledge important contributions to the genre, as well as [to represent] a body of work that is both significant and of consistent high quality," per the MWA press release issued by Margery Flax and Meryl Zegarek.

Since her first novel in 1981, Grimes has published a book or two each year through 2014, totaling over 30 books so far. In 2013, she and her son Kent co-wrote Double Double: A Dual Memoir of Alcoholism. She tells Randy Cordova of The Arizona Republic that being sober for 22 years is an achievement and daily challenge. "'I find it extremely difficult now to go into a pub in England with a friend of mine who loves to drink,' she says with a chuckle. 'I'm bored to death, but I realize how boring I must have been when I was drinking.'"

In addition to her son, Grimes has a daughter-in-law and two grandsons.