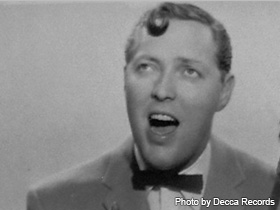 Often thought of as a Father of Rock and Roll, Bill Haley had the genre's first hit, "Rock Around the Clock."

Bill Haley, the person credited with creating rock and roll, was born on July 6, 1925, in Highland Park, Michigan. He grew up in Boothwyn and Chester, Pennsylvania and played for the bands The Downhomers, The Four Aces of Western Swing, The Saddlemen, and the popular band Bill Haley and His Comets. Bill Haley and His Comets were famous for their rock and roll music and their song "Rock Around the Clock," which became teenagers' national anthem in the late 1950s. Haley's popularity eventually declined and in 1981 he died of a heart attack in Harlingen, Texas.

William John Clifton Haley Jr. was born in Highland Park, Michigan, on July 6, 1925. He was the son of Maude and William Haley and the youngest child with an older sister, Margaret. Shortly after Haley was born, the family decided to move to Boothwyn, Pennsylvania where his father worked as a mechanic and his mother gave piano lessons at home. Music was a significant part of Haley's life from the time he was an infant to the time he died; Haley's mother taught him how to sing properly and his father taught him how to play the guitar. At the age of seven when Haley first started to become involved with music, hillbilly and cowboy songs were among his favorite genres. The cowboy style clothing and music would be a significant part of Haley's image until the early 1950s.

Although Haley stopped attending school after the eighth grade, his determination for success never ceased. Instead of going to school, Haley worked at a water bottling company at Bethel Springs Water Company and then worked at Baldwin Locomotive Works. These jobs were just temporary fillers until he became serious about furthering his music career and joined local bands in Chester, Pennsylvania. In his late teens, Haley joined The Downhomers, a local band that started Haley's musical career.

The Downhomers played a western swing style of music and Haley held the lead position in the band. They went on tour for a short period of time and in 1946 Haley came back home because he realized that this band was not going to help him achieve the success that he desired. After taking a break from the music scene, he became a disc jockey for the radio station WPWA in Chester, Pennsylvania. Although Haley enjoyed his job, his desire for stardom was still prevalent.

In 1946, Haley married first wife Dorothy Crowe and had two children with her. At this time, Haley also formed his first band, The Four Aces of Western Swing, which consisted of Al Constantine, Tex King, and Julian Barnard. The band recorded one record, but it did not gain a lot of success. Haley realized that the cowboy genre would not lead him to fame, so in 1949 he formed a new group, The Saddlemen.

The Saddlemen consisted of four men: Al Rex on bass, Billy Williamson on steel guitar, John Grande on piano and accordion, and Bill Haley as the lead singer on guitar. In 1951, they released their first single, a cover of Jackie Brenston's song "Rocket 88." Their second hit single was "Rock this Joint," which was released in 1952 and sold over 70,000 copies. During that same year, Haley married second wife, Barbara Joan Cupchack, with whom he had two children, but only one survived through infancy. The Saddlemen was the first group that Haley had been a part of and felt that he could be successful.

In 1953, The Saddlemen was renamed Bill Haley and His Comets, a group that became very well known among many generations. All of the members of the band wore tuxedos and strived to create a new genre of music that was very different from the country style that they were customary to playing. Haley personally tried to change his hair to fit his new image by styling it a new way such that a curl covered his left eye. The curl helped to distract the audience's attention from his blinded left eye, about which he had been self conscious since his infancy.

Bill Haley and His Comets always consisted of six or seven members, but the members varied throughout the years. Haley and Rudy Pompilli, the saxophonist, were the two most constant members of the band. In 1953, the group recorded "Crazy, Man, Crazy," which became the first rock and roll single to reach the top twenty list. Bill Haley and His Comets were gaining popularity and other record companies became interested in their band.

Around this time James Myers, a manager at Decca Records, wrote the song "Rock Around the Clock," which would later become Bill Haley and His Comets' biggest hit. Myers, who knew Haley from Booths Corner, Pennsylvania, wanted Haley to record the song while under the Essex Records' contract. Haley's manager at Essex Records, Dave Miller, did not approve the recording because he did not like Myers. Fortunately for Haley and Myers, Haley's contract at Essex was due to expire within a few months. On April 1, 1954, Haley and Decca Records agreed on a contract and set a date to record "Rock around the Clock" for after the contract with Essex Record expired.

In May of 1954, "Rock Around the Clock" was first released, but it did not gain most of its popularity until its second release in 1955. That year, the song was included on the soundtrack for Blackboard Jungle, a movie about teenage delinquency and rebellion. "Rock Around the Clock" had an upbeat tempo and a perfect blend of instruments that many say will never again be reproduced. "Rock Around the Clock" became the national anthem for teenagers during the late 1950s because it suggested teenage rebellion. "Shake, Rattle, and Roll" and "See You Later, Alligator" were two other songs that gained popularity and sold over a million copies. Haley and His Comets' popularity increased in the United States, Europe, Mexico, and other parts of the world. The band went on tour all over the world and gave an exciting performance every single time. Rudy Pompilli, the saxophonist, and Al Rex, the bass player, were known for their crowd pleasing antics. According to an article from The Classic Bands' website, during performances Pompilli would "arch his back until he was virtually lying flat on the floor, and Rex would throw his bass up into the air, then jump onto its side while still playing." The band's enthusiasm and upbeat rock and roll music were traits that kept the audience entertained for many years.

(Click here to hear a radio essay about "Rock Around the Clock," part of National Public Radio's series on the 100 most important musical works of the twentieth century. The file requires Real Player to run.)

As the years went by, Haley's popularity declined. The people who once loved Bill Haley and His Comets turned their musical obsessions to musicians like Elvis Presley and Little Richard. Haley began to have money problems and fled to Mexico in 1962. In that same year he met and married third wife, Martha Velasco, who was a Mexican dancer. Haley stayed out of the public eye and mostly spent time with his family over the next few years. On February 9, 1981, Haley died of a heart attack in Harlingen, Texas.

Even though Haley had accomplished so much while he was still alive, his accomplishments and recognitions did not stop after his death. In 1987, Haley and other famous musicians such as Marvin Gaye, Aretha Franklin, and Rick Nelson were inducted into the Rock Music Hall of Fame. Haley changed the music world forever with his innovative skills and rock and roll music. According to Haley's obituary written by Richard Palmer in the New York Times, he was "an important influence on the Beatles and other prominent rock performers during the 60's and 70's." Many people claim that Bill Haley is the "king of rock and roll" while others credit that title to Elvis Presley. Despite people's positions on who deserves that title, everyone can agree that Haley has influenced music in such a way that his name will never be forgotten.