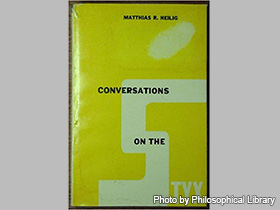 Heilig spent his life working as a clergyman and writing such books as 1969's Discussions on the Styx.

Clergyman Matthias R. Heilig was born in Stroudsburg in 1881, the son of a minister. After college and divinity school, he became a Lutheran pastor from 1909 to 1937, when he converted to Unitarianism and served as a Unitarian minister from 1943 to 1957. He then wrote two books of a philosophical nature, bringing together figures from the past to discuss problems of the present. Heilig died in 1971.

Matthias R. Heilig was born on January 15, 1881, in Stroudsburg, Pennsylvania. He was the son of Theophilus and Mary Alice Heilig. Heilig's own career in the ministry was forshadowed by his father's status as a clergyman. He would matriculate at Muhlenberg College, graduating with an M.A. in 1903. After divinity school at Mount Airy Theological Seminary from 1905 to 1908, he became a Lutheran minister in Dansville, New York, from 1909 to 1914. While there, he married his first wife, Mary Beetern, on February 10, 1909. They would have two children: Alice and David.

After his first pastorate in Dansville, Heilig moved to Downingtown, where he served as a Lutheran pastor from 1914 to 1937. During this time, with the stresses leading to World War II, Heilig had a spiritual crisis and left the Lutheran Church. He became a Unitarian minister, taking up a series of posts in Waterloo, Iowa (1943-46), Philadelphia (1947-48) and Southold, New York (1949-57).

Following his retirement as an active pastor, Heilig began writing philosophical texts. Actually, Hailig had written a number of now-rare texts early in his life: With Sullivan in 1779, The Story of Language and Literature, and The Story of Armenia. After writing A Pioneer Through Time in 1963, Heilig married for the second time on July 4, 1965, with Alsiee Raymond. The late '60s found Heilig increasingly vexed by the political and social climate of the times. Each of his last two books is a series of encounters between the author and figures from the past with whom he has a conversation, or, as he terms it, an "incident." In the preface to Conversations on the Styx, Heilig writes that the purpose for the undertaking was "the thought that we moderns are too greatly engrossed in the ethos of the present....Surely, the total residuum of wisdom and truth, and the achievements of Man as a responsible agent of progress, are of greater significance than the values of today's gigantic material structures, colossal engines, and terrifying inventions for homicide!" To that end he has "incidents" with Bellerophon, Archimedes, Roger Bacon, and Leonardo da Vinci, just to name a few. In terms of structure, Conversations and its sister text, Discussions on the Styx, resemble a combination of Platonic dialogues and Dante's journey in the Divine Comedy.