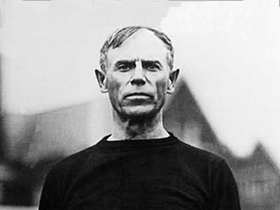 Namesake of the most important award in college football, legendary player and coach John Heisman grew up in Titusville.

John William Heisman was born in Cleveland, Ohio, on October 23, 1869. He was raised in Titusville, Pennsylvania. He was a football coach at eight different colleges and universities between 1892 and 1927, including the University of Pennsylvania and Washington and Jefferson College. He is most famous as a proponent of the forward pass, the originator of the center snap, and his winning tenure as Georgia Tech's coach. He is the author of Principles of Football, and is the namesake for the most esteemed trophy in college sports, the Heisman. He died in New York City on October 3, 1936.

Born Johann Wilhelm Heisman on October 23, 1869, in Cleveland, Ohio, he was the son of John M. Heisman and Sara Lehr. The name John William was later adopted in order to make less apparent the fact that he was the son of immigrants. His father was the estranged son of German aristocrats and husband to his lower-class wife, for whom he gave up his family, inheritance, and surname. The year after John William's birth, his father moved the family to Titusville, Pennsylvania, to pursue work as a cooper. He capitalized on the booming oil industry in this region by founding a barrel making shop that flourished and left John M. Heisman a prominent employer and successful businessman.

Heisman was raised in Titusville, where he graduated high school in 1887 as a baseball player, football player, and star gymnast on his squad. In the face of his father's profound disdain for football and the idea of his son playing such a sport, the young Heisman entered Brown University where he gave up other activities to pursue the sport of football as a lineman. Due to Brown's lack of funding, football was relegated to a club sport unworthy of intercollegiate competition. This setback led to Heisman's transfer to the University of Pennsylvania where he played for two more years and graduated with a degree in law.

Disregarding his educational focus, Heisman accepted an offer to coach football at Oberlin College. While here, Heisman played defensive end on his own football team, a practice that is no longer legal in collegiate sports. The innovative approaches he took on the field were largely copied from the talented work of Yale University's guard, W.W. "Pudge" Heffelfinger. This first season left the team undefeated with a 7-0 record and their new approach put Oberlin on the map, bringing attention to this budding athletic program.

Just one year later, in 1893, Heisman left Oberlin for a higher paying, more prestigious position as Athletic Director and Head Football Coach for Buchtel College (now the University of Akron). At this time the sport of football was considered a less sophisticated version of rugby. Players, wearing leather helmets and lacking pads, were subject to much more frequent death and serious injury than in modern football. This being the case, faculty and community members at Buchtel only tolerated a football team as a means of being admitted membership to the Ohio Intercollegiate Athletic Association.

Also at Buchtel, Heisman had his hand in the first of many permanent alterations he would make to the sport: the center snap. This came out of necessity because the previous rule, which involved the center rolling the ball backwards, was too troublesome for Buchtel's unusually tall quarterback, Harry Clark. At 6'4", it became clear that if the ball was thrown to him, the play could go on with less complication. This evolved into a common practice now known as the snap that begins every play in present National Football League (NFL) games. In spite of his successful coaching, Heisman's overly competitive nature was never welcomed at Buchtel and he returned to Oberlin for one season.

In 1895, he was offered a job as a coach and English professor at Alabama Polytechnic Institute (now Auburn University). His overbearing style and authoritarian demand for perfection were not effective there. His ostentatious manner of speaking in the locker room and abrasive presence found him work as an actor during Alabama's slow summer months. The lack of talent at Alabama Polytechnic led to the on-field chicanery for which Heisman rose to prominence. This manifested itself during a game against Vanderbilt and was known as the hidden ball trick. A player simply hid the football in his jersey, a move that is no longer legal during NFL play.

As the originator of deceptive plays, John Heisman was tired of being accused of bending the rules and set his sights higher. Never lacking self-assurance, he published a promotional pamphlet about himself that caught the eye of Clemson University. Here, in his first season, Clemson was undefeated and won the Southern Intercollegiate Athletic Association championship.

In 1903, Heisman ended his three-year tenure at Clemson and moved to coach at Georgia Institute of Technology. Within two years of John Heisman's relocation to Georgia Tech, the team enjoyed its first of many undefeated seasons. It was this same year that he married Evelyn Cox, a widowed mother of one son, Carlisle. At first, Carlisle was furious that his mother would marry Heisman as he was a difficult man to like at times. Eventually he was won over by his stepfather and attended Georgia Tech to play under his coaching supervision.

As the South's largest city, Atlanta held many opportunities for such a driven man. It was around this time that Heisman was at the frontline of many changes in the sport and in a variety of leadership positions. In 1906, the forward pass was legalized, a cause for which Heisman had lobbied unremittingly since 1900. He felt that this change would greatly improve the safety and excitement of the game. In 1908 and 1910, he was named the director of the Atlanta Athletic Association and the president of the Atlanta Baseball Association, respectively. It was also in 1910 that he helped champion the change of football game timing from a two half model to its present four quarter setup.

Heisman had begun to bring notoriety and crowds to the school, prompting a local businessman to fund a massive expansion of Georgia Tech's stadium in 1913. Two years later Georgia Tech began their two and one half year winning streak that left them undefeated until a 1918 loss to the University of Pittsburgh. During this historic run, the team also managed the highest scoring game in the history of college football. This occurred in 1916 when, as a publicity mechanism, Heisman paid Cumberland College $500 to play him in the new Atlanta stadium. The score was run up to a cruel and embarrassing 222 to zero. This helped Coach Heisman, or J.W. as the Georgia Tech team called him, prove that simply having more points does not prove the strength or talent of a team, as many teams can run up their point accumulation with a few weak competitors.

After 16 years, Heisman ended his term as Georgia Tech's coach due to his divorce from Evelyn during which he agreed to no longer live in Atlanta. The split was amicable, but to avoid social awkwardness for them both he returned to Philadelphia. He was reinstated as a coach for the University of Pennsylvania. In an effort to affix professionalism and football administrating, there were seven coaches added to the staff.

In 1922, Heisman authored his only book, Principles of Football. Written as a reference text for football players, the book contains many blank pages for note taking throughout the chapters. The following two years after being published were busy. He was named president of the American Football Coaches Association for two consecutive terms while coaching at Washington and Jefferson in Washington, Pennsylvania and Rice University.

The move to Rice was prompted by a large pay increase, leaving him better paid than any other faculty member at the school. He was also Athletic Director and funded dorms built exclusively for the football team to alert the public of his team's importance. It was here that he became reacquainted with Edith Cole, a student from Buchtel with whom he had had a very passionate romance with during his time as coach there. He and Edith were married in 1924, just three years before Heisman resigned as Rice's coach. The couple moved to New York City where he authored a sports column for Collier's magazine and became the director of the New York Downtown Athletic Club (DAC).

As director of the DAC, John traveled to Chicago and Detroit to research other successful athletic organizations. His research led to his urging the founding of the DAC's Touchdown Club. This was the group that began offering a trophy for the best college football player in the Eastern states. By 1935, the award had become national.

John Heisman died after suffering from a short illness in 1936. When the DAC gave their second trophy two months after his death, it was renamed the Heisman Memorial Trophy, which it remains today. He died in New York City but was buried in his wife's hometown of Rhinelander, Wisconsin where he had enjoyed many vacations and golf outings. Heisman is remembered not only for his innovation on the field and his tenacity in a huddle, but also for his lifelong battle to ensure football be regarded as an esteemed and respected American sport.