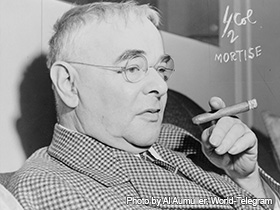 Born in Germantown, novelist Joseph Hergesheimer was a great critical and popular success in the 1920s.

Joseph Hergesheimer was born in Germantown, Pennsylvania, on February 15, 1880. He enrolled in the Pennsylvania Academy of Fine Arts for painting, but left for Italy after receiving an inheritance. He returned in a year and decided to take up writing. Inspired by Impressionism as well as English writers focused on loose ideals of beauty, Hergesheimer became one of the true American aesthetes. His work held great favor for over a decade, but declined in popularity as the disillusionment of the Great Depression era set in. He subsequently abandoned both aestheticism and writing, eventually dying in Sea Isle, New Jersey, in 1954.

The late nineteenth century saw the birth of Joseph Hergesheimer into a middle-class, Germantown family on February 15, 1880. His father, the elder Joseph, traveled extensively on surveying excursions. During such periods, Hergesheimer's mother took him to stay at Woodnest, her parents' house outside of Philadelphia. There, his Presbyterian grandparents and great aunt provided models for proper conduct and ethics, although he lost any religious impressions they made upon him.

Throughout his childhood, Hergesheimer suffered illnesses so frequently that he spent only three years in formal education. With a mother emotionally withdrawn, seemingly for having lost three children prior to Joseph, and with a lack of schoolmates, Hergesheimer spent portions of his childhood engrossed in private fantasies. He was quoted later in life, describing such visions: "I couldn't remember what I had hoped for, probably an entrancing adventure of the heart, the miraculous advent of a loveliness in white and with her hair up." This natural interest in romance demonstrated itself in his fascination with novels that he would later describe as "trash," as well as with poetry from authors such as Keats and Coleridge. His teenage years brought with them an increasing interest in the magazines of English aesthetes.

At the age of seventeen, Hergesheimer enrolled in the Pennsylvania Academy of Fine Arts with the desire to study painting. Proving rather unsuccessful in this path, he nonetheless developed an affinity for Impressionism. Four years later, his maternal grandfather passed away, leaving Hergesheimer with a sizeable inheritance. Thus, he was able to leave his home country at the age of twenty-one to study painting in Venice and Florence, an experience thought to have greatly influenced his use of visual and pictorial detail seen in his earlier fiction. After only a single year, however, a luxurious and self-indulgent lifestyle depleted his entire fortune, forcing his return to the United States in 1902 and re-enrollment in the Academy of Fine Arts.

Hergesheimer had meanwhile resolved to change his lifestyle, and after being asked to proofread a manuscript for the English novelist Lucas Cleeve, he decided upon writing. He wrote continuously for the next several years, hampered by a poor education and struggling towards improvement. In 1907, he wed Dorothy Hemphill, an acquaintance from the Academy, and they departed upon a two-year honeymoon in Europe. Writing occupied much of his time even then, working on novels that would never be published. Returning in 1909, he spent the next several years improving his writing and prose further, and in 1913 managed to sell three short pieces to the Forum.

Through the next winter he completed his first published novel, The Lay Anthony (1914). Within this novel's pages, he focused on developing the use of symbols, using lilacs to represent both a man's adoration for a woman that is ultimately taken from him by pneumonia and his commitment to purity. Together with Mountain Blood (1915), his second novel published the following year, Hergesheimer gained the attention of critics that recognized him as a growing talent. This second novel differed from the first, in that the focus seemed to shift from the romantic to the moral. On the surface, Mountain Blood seems to offer the message that evil actions are punished by death (the reason that Hergesheimer himself described the book as a "Presbyterian performance"), but many of the religious figures within are portrayed negatively, perhaps as a stab against the religion he experienced as a child.

The Three Black Pennys in 1917 opened Hergesheimer's audience to his aesthetic and historical interests. The story details a passage of time, covering multiple generations within a family. This focus on family, however, belies how little the characters themselves seemed to have meant to him; rather, Hergesheimer treated them only as "musical notes within a theme," vessels for his aestheticism. This trait shows itself throughout his later works, as well. He was often criticized of shallow characterization, involving men reaching for some unattainable ideal, such as the beauty of purity or atonement, with that particular ideal being more important than the character striving for it. He also strove to create as detailed a picture as possible, perhaps using a paragraph or two just to describe a single table.

With Java Head, released in 1918, Hergesheimer concentrated solely on aesthetics, losing any trace of the moral ideas behind his earlier works. Often considered his best work, Java Head involved meticulous research on mid-nineteenth century Salem, the setting of the story, with over ninety books being read and multiple authorities fact-checking his manuscript. The story itself involves little more than the return of a long-overdue ship captain, with each chapter being told through a different point of view. Hergesheimer set out to bring the world to life, not only through vivid scenery but also by attempting to give life to each character, making both their thoughts and actions distinct from those of the others. One character's interactions, for instance, relates to living her life according to Tao, and thus her point of view is distinct from the more typical.

The next decade brought numerous other works, including novels, short stories, and periodical columns, and Literary Digest rated Hergesheimer the best contemporary author in 1922, as David Minter recalls in his article on the author. As the post-World War era gave way to that of the Great Depression, however, literary tastes began to change. His ideals of aestheticism, as well as his somewhat shallow characterization used only to promote those ideals, began to fall out of favor with a public growing more disillusioned. Through the 1930s, Hergesheimer himself began losing the love for aestheticism that had carried him for decades, and he spent much of his time reading historical and philosophical works. By 1945 he had ceased writing and moved from his West Chester home to Stone Harbor, New Jersey, where he remained until his 1954 death in Sea Isle.