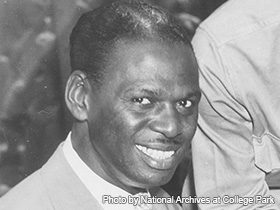 Born on December 28, 1903, Earl "Fatha" Hines grew up in Duquesne, Pennsylvania. Hines studied to become a jazz musician in high school, and by the time he was 18, his musical career had begun with singer and bandleader Lois Deppe. In 1924, Hines moved to Chicago, Illinois, where he met many famous jazz musicians including one of his recording partners Louis Armstrong. Most famous for his unique piano-playing style, Hines led several bands, went on many tours, and recorded a large amount of music over the course of his career. Hines died in 1983 from a heart attack. He is fondly remembered as a legend in the jazz music scene.

Earl Kenneth "Fatha" Hines was born on December 28, 1903, in Duquesne, Pennsylvania, to Mr. and Mrs. Joseph Hines. His mother died when he was only three-years-old. Hines was raised by his father and stepmother, Mary. His father worked as a foreman at the coal docks, played the cornet, and led the Eureka Brass Band. His stepmother worked as a church organist. He lived with his extended family consisting of his half-sister, half-brother, aunts, uncles, grandparents, and cousins, many of whom were musically inclined. Hines was briefly married to singer Laura Badge in the early 1920s, and then he had a common-law wife, singer Kathryn Perry, for many years after. He never had any children with either of them. In 1947, Hines married Janie Moses and had two daughters, Tosca and Janear. They later divorced in 1980.

First wanting to follow in the footsteps of his father, the cornetist, Hines changed his focus to the piano instead when he realized that playing the cornet hurt his ears from blowing air into the instrument. His stepmother gave him his first piano lessons, and he learned to read music really well. When he was 14, Hines moved to Pittsburgh to live with his opera-singing aunt and attend Schenley High School in pursuit of majoring in music with the hope of becoming a classical pianist. Here he was exposed to a greater variety of music, including jazz which instantly became his new love. Hines shifted his focus from classical piano to jazz piano. He took private lessons from several teachers who were unable to keep up with his inherent ability to read and play music. At age 15, he created a musical trio with a violinist and a drummer. They played at many school functions, nightclubs, and church socials. His schedule became so busy by the age of 16 that his teachers advised him to drop out of school to better pursue his musical career.

In 1922, at the start of his career, Earl Hines joined the band of Lois B. Deppe, a prominent singer and bandleader in the Pittsburgh area, which was his first steady job, earning $15 per week. They were the first black orchestra to have their music played on the radio. While playing with this band, Hines developed his trademark "trumpet-style" piano playing technique. He said the major influence behind his innovative style was trumpeter Joe Smith, a popular musician of the time. Hines's unique and unmatchable style permitted him to have a long, successful career. This extensive career began when he was only 17 when he made his first recordings with Deppe, which included one original composition. At age 18, Hines left Deppe and created his own band with Benny Carter, a saxophonist. During this year, a well-known pianist of the time, Eubie Blake, encouraged Hines to move to Chicago, which was the hot-spot for jazz talent.

Earl Hines took Blake's advice, and in 1924, he packed his belongings and moved to Chicago, Illinois. There he began playing in Carroll Dickerson's orchestra at the Entertainer's Club in 1925. After touring for nine months with Dickerson's ensemble, he returned to Chicago. Teaming up with famed trumpeter Louis Armstrong and drummer Zutty Singleton, he formed a musical trio that played regularly at the Cafe Sunset, a club frequented by gangsters. Unfortunately the club closed, so the trio broke up, and Hines joined clarinetist Jimmy Noone's band at the Apex Club. In 1928, he made records with Noone's band, solo recordings, and tracks with Louis Armstrong. Armstrong and Hines created some of the most renowned records in jazz, including the famous trumpet and piano duet, "Weather Bird." Hines's best solo recording was his original "A Monday Date."

Later in the year on his birthday, he began to lead his own band at the prestigious Grand Terrace Ballroom in Chicago. He and his band worked seven days a week, performing three shows a night and eventually began touring two to three months of the year. They were one of the first African-American bands to tour the South during the 1930s. While touring with this band, Hines received his nickname of "Fatha." Hines offered a drunken announcer some "fatherly" advice about limiting his excessive drinking. The announcer retaliated by introducing him as "Fatha" Hines, and the nickname stuck with him. The band left the club in 1940 and began making hit recordings together—"Jelly Jelly," "Boogie-Woogie on the St. Louis Blues," and "Stormy Monday Blues." Hines is credited with fostering the careers of many other famous musicians in his band such as Dizzy Gillespie, Charlie Parker, and Billy Eckstine, to name a few. Hines received Esquire Magazine's Silver Award in 1944.

In 1946, Hines was injured in an automobile accident, and he could not longer tour with his band. Hines's band split up in 1948 as the interest in big band entertainment was dwindling. Hines reconnected with Louis Armstrong once again, and he toured Europe with the Louis Armstrong All-Stars. He left this group in 1951 and led his own band until 1955. In the late 1950s and early 1960s, Hines worked a regular job at the Hangover Club in San Francisco, California. After fading from the limelight, Hines was invited to play three solo concerts at the Little Theatre in New York. A rebirth of interest ensued, and Hines created more recordings and starred in several international tours. Hines received the great honor of being inducted into the Jazz Hall of Fame in 1965.

Throughout the course of his career, Earl Hines strived to improve his already impeccable piano-playing ability. In the later years of his life, he suffered from heart problems and arthritis. Hines played his last show in San Francisco. One week later, Earl Hines died in Oakland, California on April 22, 1983, from a heart attack. Several albums of early recordings and his most popular tracks have been released in his memory since his death. His legacy remains as one of the greatest jazz musicians in history.