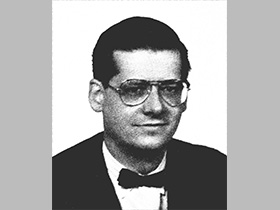 A science writer for children, John Lindsey Hoke was born in Pittsburgh.

A lifelong conservationist, John Hoke was born in Pittsburgh in 1925. He wrote a number of books for children including topics on animals, on cameras, and on ecology. After his retirement from the National Parks Service, he worked to improve conditions in various wetlands in the District of Columbia. Hoke died in Bethesda, Maryland, on February 25, 2011.

John Hoke was born in Pittsburgh, Pennsylvania, on June 26, 1925. His parents were John Hoke, an editor, and Helen Hoke Watts, a writer and editor. After high school, he matriculated at Antioch College, earning his B.A. in 1950. In June of the same year, Hoke married Sylvia Hyde, with whom he has four children.

Hoke lived in the South American nation of Suriname and worked as a communications media officer for the International Cooperation Administration (ICA). In 1962, while working in Suriname, Hoke saw an advertisement for solar-powered fans, and, after having several sent to him, created a boat that could quietly travel through heavily vegetated waterways. One congressman believed Hoke's boat was ridiculous (because it would cost $28,000) and had him fired. Hoke became an independent writer and inventor for two years before once again working for the government. After the fall of his solar-powered boat project, he devised a plan for a low-cost electric car that would not cause air pollution. After joining the National Park Service in 1970, Hoke began to promote his electric car to the agency as a means of transportation around the nation's capital; now, nearly 75 electric cars are used to patrol the parks. After 21 years as a biological engineer, Hoke retired on December 31, 1991, but planned to continue as a consultant for the Parks Service and to work on publishing in his field.

Hoke's specific writing and editing periods are largely sandwiched between periods of employment with government agencies. However, over a span of more than 25 years, Hoke wrote numerous children's books about his favorite topic—ecology. These books included The First Book of Snakes and Discovering the World of the Three-toed Sloth. Besides children's books, he has contributed to many government publications and popular periodicals. He also collaborated with his mother to produce Music Boxes: Their Lure and Lore, which is addressed to an adult audience.

Although he received no literary awards, Hoke was given the Meritorious Service Award of the U.S. Department of the Interior for his 1968 conversion of the Simon Bolivar Pond into a self-sufficient wetlands ecosystem. This conversion has saved the government thousands of dollars a year in maintenance costs and has resulted in the conversion of several other Washington, D.C. ponds. Another of Hoke's cost-saving suggestion for the U.S. was planting trees on the rooftops of Washington, D.C., to prevent natural wear from the weather. He continued his commitment to alternative energy and invention throughout his retirement.