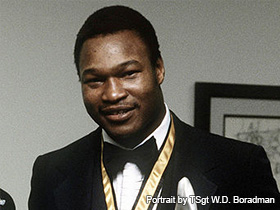 Larry (the Easton Assassin) Holmes was the heavyweight boxing champion from 1978 to 1983.

Larry Holmes was born in Georgia, but raised most of his life in Easton, Pennsylvania. It was here he gained his nickname, "The Easton Assassin." He grew up in poverty, but had talent in the area of boxing. Holding an incredible record of consecutive wins, he grew to become the World Boxing Council's (WBC) World Heavyweight Champion and held the belt after defeating Ken Norton. He defended this title 17 times to later relinquish this belt to obtain the championship of the new International Boxing Federation (IBF). After retirement, Holmes continues to build on the Larry Holmes Enterprises and his Ringside Restaurant and Nightclub. He and his family reside in Easton, Pennsylvania.

Larry Holmes was born in Cuthbert, Georgia, into a sharecropper's family. At the young age of six, his family took leave of that lifestyle in search of a better one in Easton, Pennsylvania. That was the story his mother, Flossie, told him. His father, John Henry, went up first in search of better paying work amongst all the steel mills, iron foundries, paper mills, and sewing factories and left a hard life in Cuthbert. After the move, they soon realized the job market was in recession as the Delaware Valley was recovering from a hurricane, which affected many black families who had moved up from the South. His father had searched further north for work only to come back with news that he fell in love with another woman in Connecticut. He left his wife and twelve children in Easton and visited once in awhile.

Holmes's first grade-school job was as a shoe shiner and he went around bars and clubs for 15 cents a shine with hopes of a tip. This job allowed him to become a familiar face at the clubs and to later be included in organized backroom boxing matches. A group of kids would be picked up to fight as entertainment in these bars and clubs. At the age of 10, Holmes, along with several other children of varying ages and sizes, would participate in these events for free food after the fight as well as to earn respect on the streets. Though it was his first taste of boxing, it did not spark a vision in him to do it for a living.

By the seventh grade, after being hassled by a biased teacher several times, he decided to leave school, which later got him sent to juvenile jail. After 13 days, he was sent to a hearing at which he was given the option to quit Shull Junior High. He did just that. He soon got a job at a carwash where people would pick fights with him, helping build his character and skill. During these fights, the matter of pride was at hand and this included not allowing anyone to mess with him or treat him like less than a man. These experiences also led him to what he claims was the dumbest thing he has ever done: walking up to a white man who was holding a shotgun with the claim that he would not shoot, and eventually grabbing the shotgun and beating him down.

As a tough street fighter, he still did not think about boxing as a way of life until Ernie Butler, a former professional fighter, showed up in Easton. It was in their sparring session that Butler found potential in Holmes and offered to teach and train him. After nine months of training and emphasizing the importance of balance, Butler decided to take the kids he was teaching on amateur fights. Holmes was the only one who did not back out and won his fight in New York. As his amateur career blossomed, he almost lost his momentum getting caught up in drugs, which he finally gave up forever after a he went for a long run and made a promise to God.

With Butler, they traveled to Schuylkill County, Pennsylvania, where Muhammad Ali held a training camp and Holmes eventually became the sparring partner of this boxing legend. Ali took Holmes under his wing and provided him with equipment as Holmes was not on the camp's payroll. After Don King took over Ali's camp, he overlooked the talent of Holmes and saw him as nothing more than a good sparring partner. Don King finally recognized this orthodox boxer's talent when Ali's prime was coming to an end and King needed a new champion. Holmes would constantly argue with King as financial issues came to hand and how King was not giving him a fair share as his pro career bloomed. With an undefeated record of 26-0, Holmes managed to defeat Earnie Shavers in a 12-round decision, giving him a title shot against the World Boxing Council's heavyweight champion, Ken Norton, who was proclaimed the WBC heavyweight champion four days after Holmes defeated Shavers. During a 15-round slugfest, Holmes defeated Ken Norton on June 9, 1978, and claimed the WBC World Heavyweight Title. Looking back, Holmes considered Norton his toughest opponent after Ali. Holmes eventually fired Don King as his manager as Holmes felt cheated financially by King. During his successful career, Holmes found his own promoters, or sometimes promoted his own fights.

Holmes defended the title for five years and 17 matches until he voluntarily relinquished the WBC belt to hold the championship of the new International Boxing Federation (IBF). After defending the IBF title for three matches, including a match against "the great white hope" Gerry Cooney, he tasted his first professional loss in a controversial decision against Michael Spinks in 1985. This outraged many fans and especially Holmes as he was one win away from reaching Rocky Marciano's record of winning his first 49 consecutive professional fights. When he got a rematch with Michael Spinks in 1986, he lost again in a disputed split decision after which he retired from the sport. He came out of retirement in 1988 for a four million dollar purse fight to challenge the current reigning undisputed heavyweight champion of the world, Mike Tyson. By this age, many felt he was too old and was making the mistake that Ali did. They were correct as Holmes tasted his first and only knockout in the fourth round. Many critics say he made the same mistake as Ali by coming out of retirement. Holmes current record stands at 75 fights with 69 wins, 6 losses, with 44 knockouts, and attained praise from famous boxing historian Bert Sugar, as one of the greatest boxers in history. With 20 successful title defenses, surpassed only by Joe Louis, and record for eight consecutive knockouts in title fights, Sugar's statement on Holmes stands firm.

Holmes current endeavors include his business skills as he promotes his entrepreneurial skills and real estate establishment. By the mid-1980s, Holmes could boast of his business empire that included a five-story office building on 3.2 acres on Larry Holmes Drive in Easton. He is known as a philanthropist and also owns a restaurant called Larry Holmes Ringside Restaurant, which he frequently visits during lunchtime to greet his customers. His ventures in real estate include building a 100,000 square foot office complex with long term government—Federal and local—Fortune 500 companies (Smith Barney, Bank of America), Federal Courthouse, Manpower Employment Agency, Allied Employment Agency, mortgage, and financial institutions, charity bingo hall, USBL basketball team, travel agency, fitness gym, and law offices. Holmes helped develop a new pain relief lotion called "O24" and his life is depicted in the Larry Holmes Documentary called In the Arena by Playback Pictures. He also co-wrote an autobiography with Phil Berger titled Against the Odds, written to encourage people as he grew out of poverty and overcame the hardships facing him and to tell people to pursue their goals. Larry Holmes says, "Against the odds, I succeeded."

Succeed he did, earning his place in The International Boxing Hall of Fame on June 8, 2008, in Canastota, New York. His image is also in the process of being preserved in a bronze statue located in Scott's Park in Easton. The project was started in 2010, but has yet to be finished because of a $25,000 shortfall.

Holmes and his family currently live in Easton, Pennsylvania.